At the beginning of June AMD launched the AMD Radeon Pro W6800, a monster 32 GB professional GPU, which we review in-depth here.

Such a huge amount of on-board memory certainly makes the W6800 stand out from other GPUs in its class. However, the ‘RDNA 2’ workstation card also features a new pro graphics driver feature called Radeon Pro Viewport Boost, which is designed to reduce latency and boost viewport navigation performance.

The idea behind the technology is simple but smart. It detects when a 3D model is moving quickly in the viewport, then dynamically drops the resolution to reduce the number of pixels the GPU needs to process. Then, as soon as that movement stops, it restores the full pixel count. According to AMD, this can increase Frames Per Second (FPS) dramatically without impacting the visual experience.

It works best in GPU limited workflows. i.e. those where the GPU is being pushed to its limits and is the bottleneck in the workstation. And, with this in mind, it should deliver the biggest benefits at higher resolutions (4K and above), with larger models and when visual quality settings are maxed out.

Radeon Pro Viewport Boost is enabled in the AMD Radeon Pro 21.Q2 driver under graphics settings. Users have control over the minimum dynamic resolution that the application viewport will drop down to, expressed as a percentage of its native resolution. It can be set between 50% and 83.3%. The lower the value, the bigger the potential performance boost.

To show the extent to which it is working at any given moment, one to four small green dots appear in the top left corner of the viewport – one being the least, four being the most.

The smart thing about Radeon Pro Viewport Boost is that it only works when the model is in fast motion, when the eye is less sensitive to a loss of visual detail.

In both of our Unreal Engine arch viz interior scenes, for example, it only kicked in when ‘running’ (shift, up arrow) and not when ‘walking’ (up arrow only). At 50%, the drop in resolution is clearly visible but only really when you actively look out for it. At 83.3% it was very hard to see any difference.

When modelling in Revit or 3ds max, lines become more pixelated. But with the speed with which one tends to pan, rotate, or zoom-in, to quickly shift focus to a different part of the model, it’s really not detrimental to the overall experience.

We tested on a fairly standard 4K (3,840 x 2,160 resolution) 60Hz IPS panel. There may be a bigger discernible difference on higher spec displays.

The performancebenefits can be huge. In Unreal Engine 4.26, testing with a Paris interior scene from arch viz artist Benoit Derau (benoitdereau.com) we saw frame rates more than double (116%) when minimum resolution was set to 50%. In Unreal Engine’s freely available Arch viz interior scene packaged as a DirectX11 project it increased by 59%.

In Twinmotion the boost was around 30% with the ‘materials room’ demo scene when visual settings were set to ‘ultra’. In 3ds max we saw around a 20% improvement with AMD’s ‘snow bike’ model with high anti-aliasing and “High Quality” shading. 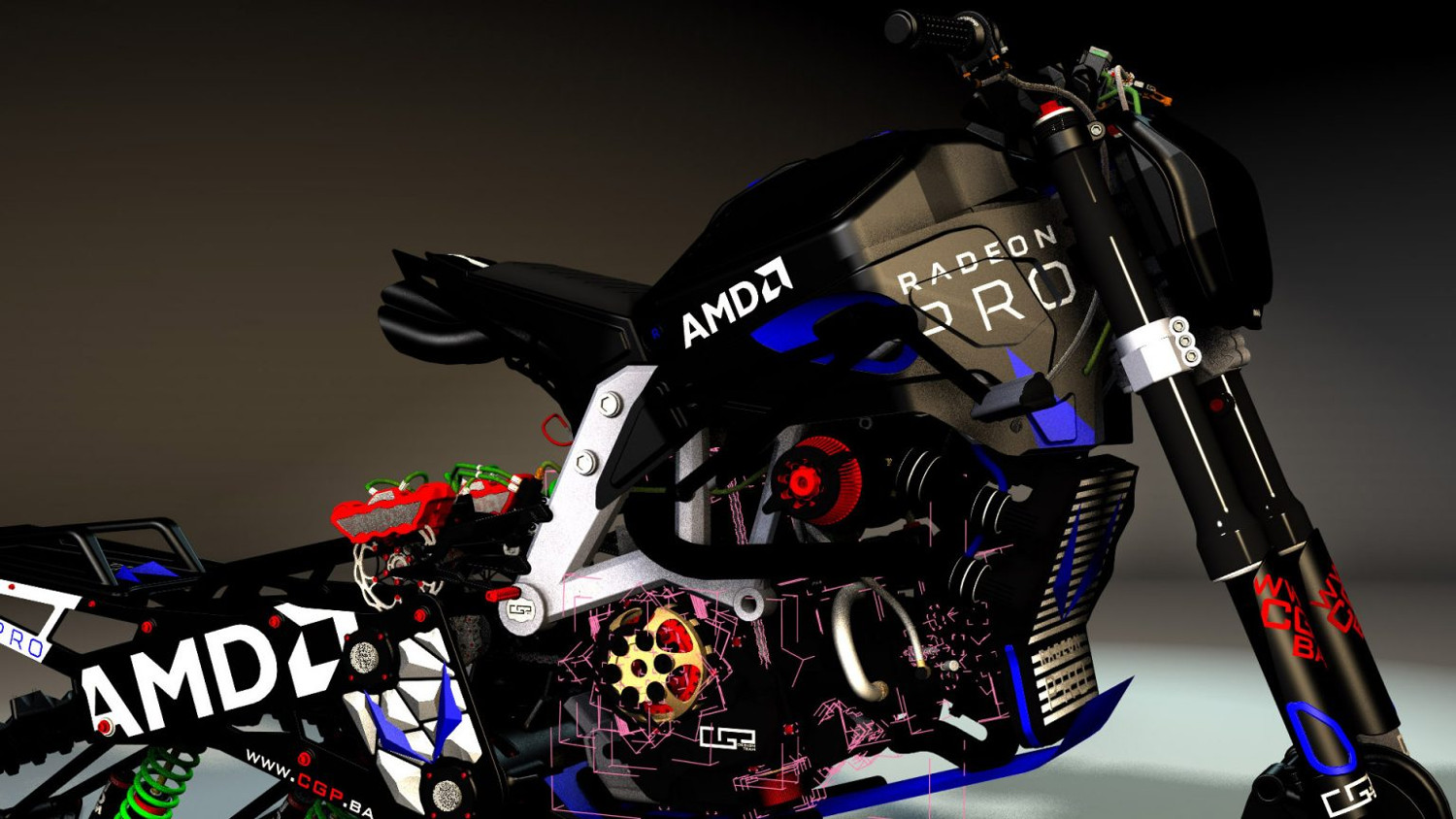 For design viz applications like Unreal Engine and Twinmotion having the highest quality graphics is always the ultimate goal. However, in 3D CAD and BIM modelling workflows it’s usually less important, with the focus instead on the clear representation of geometry.

With this in mind, the benefits of Radeon Pro Viewport Boost in CAD or BIM applications like Autodesk Revit are less clear.

In Revit, the most popular way to view BIM models is in ‘shaded’ mode. However, with this display style enabled we saw no benefit to Radeon Pro Viewport Boost. As with many CAD and BIM tools, the GPU simply isn’t stressed enough, so the CPU becomes the bottleneck instead.

It’s only when you start ramping up the quality settings that more demands are placed on the GPU and Radeon Pro Viewport Boost can come into effect.

And while the performance increases can be large, we only found a few select scenarios where a substantial benefit could be seen.

We tested with four relatively small Revit models and found that if the following criteria were met — realistic display style, smooth lines with antialiasing, transparency enabled, and viewport set to perspective mode — then there was a huge performance gain; almost double the Frames Per Second.

But without all of those enabled — especially with the viewport set to orthographic — the performance gains were minimal, or there were none at all. We would be interested to learn how the system works with significantly larger models.

It’s also worth pointing out here that most CAD and BIM applications already have a built-in feature to help improve viewport performance when working with large models. In Revit, for example, the ‘simplify display during view navigation’ feature (which is switched on by default) suspends certain graphics effects and temporarily removes some objects when the model is in motion.

Radeon Pro Viewport Boost gives the best performance boost when this feature is enabled, so you are getting a lower res representation of a model that has already been simplified.

Of course, Revit like many CAD and BIM applications, is renowned for being CPU limited so it’s hardly surprising we found reduced benefits for Radeon Pro Viewport Boost. This is especially true for a high-end graphics card like the Radeon Pro W6800, which is complete overkill for Revit.

In CAD applications that make better use of the GPU, such as Solidworks 2021, AMD Radeon Pro Viewport Boost could have a bigger impact in a broader set of viewing styles.

It’s also important to note that CAD applications are changing, with new graphics engines that use modern APIs like Vulkan to push more processing onto the GPU and reduce the CPU bottleneck. This includes future versions of Solidworks (Project Romulan) and Autodesk Revit (and other Autodesk applications) which will use the new One Graphics System.

It’s good to see AMD innovating by taking a smarter approach to how GPU resources are allocated. Why bother rendering pixels that most people won’t even notice when models are moving at speed?

From our tests we see a clear benefit for design visualisation, where applications almost always push the GPU to its limits and visual quality is of paramount importance. We’re less convinced with the broader advantages for CAD and BIM software. In Revit, for example, it appears you have to use a fairly specific combination of visual settings in order to benefit. And, in a workflow where the clear representation of geometry is usually the priority, one would also question how many people actually view models that way.

At the moment, application support is quite limited, but this will grow. We imagine AMD is working on support for Unreal Engine Editor as well as DirectX 12, which should be a big attraction for viz artists, especially those working with huge datasets that approach the substantial 32 GB memory limit of the Radeon Pro W6800.

When AMD first announced Viewport Boost it was exclusive to the Radeon Pro W6800 and W6600 GPUs. AMD has now confirmed that it will be expanding support to prior generation Radeon Pro GPUs as well. So, for those that already own an AMD Radeon Pro GPU, this could be a great way to get more out of your investment.

And it’s perhaps with less powerful GPUs like these, that users will get the biggest benefits. In all of our tests we experienced pretty good viewport performance (most well above 20 FPS) even with Viewport Boost disabled. But it’s when frame rates drop lower, and viewports become choppy, that any performance increase can make a huge difference to practical workflows and become far more important than numbers on charts.