Markforged has announced Digital Forge, a cloud-based platform that uses machine learning to help make its 3D printing ecosystem smarter and able to build better parts with each print.

The key point is that Digital Forge’s AI elements allow Markforged’s software and hardware to be constantly learning from data being generated across the company’s expansive fleet of over 12,000 cloud-connected 3D printers.

This collates all the most successful practices to be directly passed on to every part being processed for production on a Markforged 3D printer – the type of which can be used to instantly course correct 3D print jobs, for example.

The platform puts the company’s 3D printing software, Eiger, in the cloud, allowing it to connect via web browser to the user’s network of 3D printers – including its continuous carbon fibre polymer printers and its line of metal 3D printers.

As a result, parts are claimed to be more accurate than can be achieved from mechanical hardware alone. And because the platform itself is cloud-based, it can be constantly updated and enhanced so that customers are always able to leverage new advancements. 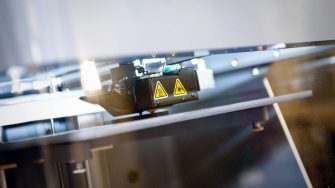 Markforged states that Digital Forge is also ‘the only additive platform’ that can print continuous carbon fibre reinforced parts and metal in a safe and accessible way from a single browser tab.

“We started Markforged with a cloud-first, software-first approach that was designed for the modern world, and now we are applying that approach to accomplish things people thought were still decades away from coming to market,” said Markforged chairman Greg Mark.

“Through the Digital Forge, manufacturers can use our powerful software to easily fabricate strong, accurate, and durable metal and composite parts for orders of magnitude cheaper than they’ve traditionally been made — on demand and directly at the point of need.

“We are nearing the 40th anniversary of the 3D printer (2026), and I believe the pandemic of 2020 and the supply chain disruption it has caused will usher in the next great Industrial Revolution — the era of Digital Manufacturing — and we are on a mission to put the Digital Forge in every factory on Earth as part of that revolution.”

In addition to announcing Digital Forge, Markforged also disclosed that it now operates the world’s largest connected fleet of industrial 3D printers, with more than 12,000 3D printers, including customers pushing their systems to the limits at Siemens, Porsche, and Microsoft.

“Siemens Energy prides itself on delivering not only the world’s most advanced technology in the energy market, but also utilising the best technologies to achieve that,” said Pontus Johansson from the additive industrialisation arm of Siemens Energy.

“With the Markforged Digital Forge, the ability to create exceptional parts and put them to operational use is incredible. Our collaboration with Markforged enables us to continuously grow a better value chain capability. Additive manufacturing is an area where we are, and intend to stay at, the absolute forefront.”