Manufacturer of perhaps the most popular CAD mouse, Logitech, has released its latest generation Logitech MX for Mac.

Logitech has been developing some of the most robust input devices for many years, with the first Logitech MX mouse launched over 16 years ago.

The latest generation of its input devices (mouse and keyboard) has just been launched in a variant specifically designed for the Apple Mac platform.

This is excellent news for those of us that have a preference for underpowered and overpriced hardware.

So, what does it bring?

We already know that the Logitech MX series of mice are one of the most popular CAD mouse out there but the chances are that you’re using an older generation.

The Logitech team has redeveloped the MX to slightly jiggle all of those shortcut buttons (the one under the thumb is pretty useful for app switching, in case you’ve not used it), a redeveloped scroll wheel that detects how quickly you are looking to whizz through those spreadsheets and give you finer control when you need it (essential for design and engineering software use).

And while I’m going to take flack for this, the fact that it now has a USB-C charging cable is something I like a lot.

The MX Keys for Mac keyboard features a slightly rearranged keyboard layout to suit Mac users (the usual swapping of Ctrl + Alt + Windows swapped out for Ctrl + Option + Command) and that Eject key has been squeezed in too (see the diagram below to show why that’s still useful). 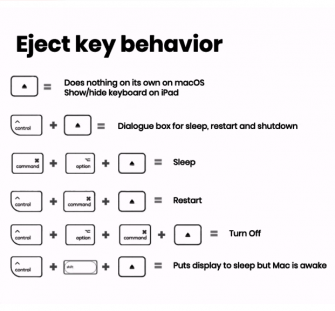 It’s a solidly built unit, features backlighting (something that Apple’s own separate keyboards lack) and promises a day’s work on just a 3 minute charge.

You can connect up to three devices, use hardware switches on both the keyboard and mouse and snap to those devices and control them.

I’d tried to get this working with the MX 2s mouse, but didn’t get particularly far, but it looks like it’s working nicely.

While I’ve not set it up, there’s also a software option called Flow that allows you to connect the clipboard and file transfer between multiple machine should you choose to explore it.

Other than a few colour changes, these are what you’ve come to expect from Logitech – solid products that don’t mess around.

The company has been working on its, sometimes sketchy, Bluetooth connections (having been working with these products for a week or so across multiple machines, it seems way more robust).

The universal receiver is included still, though Logitech for those with a Bluetooth ban in place or crowded wireless workspace.

The full-set is available now for £99/$99 from your usual sources.