Inventor has been Autodesk’s flagship product for product design, engineering and manufacturing for quite some time.

The product is now over 20 years old. In software terms, it’s undeniably in the ‘mature’ stage of its lifecycle.

The functionality you’ll find today in Autodesk Inventor is as deep as it is wide.

While the product might not get the same level of attention from the Autodesk marketing machine as it once did, the last few releases have shown that the team developing it is capable of making bold choices – not afraid to hold back from reconsidering how things have been done for years, or from tackling new challenges.

The Inventor user experience, in particular, has undergone some pretty slick rework over the last few releases.

From the introduction of support for higher resolution 4K monitors, dockable windows and tools that enable you to take advantage of multi-monitors, today’s Inventor is more in line than ever with what modern users expect and demand.

There’s also been a ton of work done to make dialogues more efficient and to bring together functions that might have once been split across multiple windows into single, expandable dialogues.

While many of the core tools have already been updated, the Inventor 2021 release sees attention start to shift to add-on areas of extended functionality: tube and pipe, for example, and frame generation.

Since 2018, recent releases have seen Autodesk flesh out its AnyCAD technology, which allows you to bring in data from thirdparty systems and/or in non-native formats.

With some magic at work under the hood, you can work with that data just as you would with native data, without any intermediary step.

Associative links are maintained to source data, too, so any subsequent processes and references should update during design changes.

Of course, the ‘magic’ part of AnyCAD is that the system effectively internalises the translation process, without the creation of intermediary files.

AnyCAD was initially conceived of as a way for mechanical engineering data to be shared, so support for formats reflect this goal of collaboration.

STEP files, for example, have been supported alongside native data from the likes of Solid Edge, Solidworks and more for a while.

It’s also proven useful when working with Fusion 360 data and 2D drawings from AutoCAD from inside Autodesk’s own product portfolio.

For the 2021 release, this has been extended to Revit datasets. From both Autodesk’s official stats and from our own knowledge of the DEVELOP3D readership, a huge number of users use both Inventor and Revit for projects in the construction industry.

For them, Inventor’s powerful mechanical engineering tools are a great supplement to Revit’s architectural focus, supplying data about engineered products (structural steel, windows, staircases, HVAC systems and so on) that can be integrated into BIM models.

Equally, users are bringing Revit data into Inventor for reference.

With Inventor 2021, you’re able to do that directly, using AnyCAD’s filtering tools during the import process to grab any data you want to reference.

In this way, the data arrives already organised and retaining appearances already defined in Revit. Should there be any update or change to source data, then you’ll be notified and the migrated data can be updated, along with any references.

Another area that’s seen a lot of work is Frame Generator. This was a focus in 2020 and again in 2021, and it’s really starting to look more modern, gaining some impressive new functionality along the way.

There’s been work done across the board to make the creation and organisation of frame entities a more considered process.

Particular attention has been paid to naming strategies, as well as to how a naming strategy is reflected on the screen (for example, having a part name mirrored in the display name in the part browser panel).

Alongside this, there are new tools to assist during frame creation, such as a filter for selections and new ‘presets’, ideal for those forms most commonly used by your organisation.

When you’re laying out a frame and using the same profile member, the ‘reuse’ command makes the process easier and more intelligent (change one, update them all).

The only sticking point previously was that you had to select the first instance of that member type to reuse it – and that’s not always easy to keep track of in larger, more complex layouts.

Now, you can select any member (original or subsequent reused copies) to reuse the same profile data.

In addition to placing frame members, there are also new termination options. You can now trim and extend a set of members to a curved member – useful, but also note that the end result curve is a straight cut, rather than shaped to the curve with which you’re intersecting.

On the notching tools front, while there was already support for circular tubes and I-section beams, C- and T-sections are now supported, too.

Autodesk Inventor 2020 saw the introduction of the Unwrap tool, designed to help take complex parts and to create a flat pattern from them.

While Inventor has, for many years, offered sheet metal tools, Unwrap is intended to be used for more complex, less easy to flatten forms.

These could be used to find a blank from complex stamped forms, or to help with the development of soft goods or fabric components.

With each point release, the tool has been added to. The 2021 functionality adds additional controls, enabling you to align your results with the model, or the XY, XZ, YZ planes, as well as a selected face.

You can also select multiple planar holes to be rigid, meaning that they will retain their shape and position during the process.

No review of Inventor would be complete without a quick look at what the team has done on the drawings creation front.

For this release, there are a couple of key points to focus on. The first centres on sheet format templates, which were introduced quite some time ago.

These allow you to define a set of standard drawing sheets required for a project and have the system automatically populate views based on your part or assembly selections.

These are now much more accessible, as they’re available in the drawing creation dialogue. There are also additional options to define view state, such as hidden line removal options or shaded views, as well as a Fit to View option.

This latter option is going to be really useful if you’re automating design of families of parts that have a wider-than-average size range, since you won’t need to adapt drawing scales manually.

In addition to the formatting updates, the Sheet Format tools also now support BOMs in assemblies, as well as flat patterning of sheet metal parts, so you can automatically insert the flatted form as well as the folded state where needed.

While Sheet Formats allow you to automate some drawing view layout processes, if you want to go further, then you’ll be venturing into iLogic territory.

This is Inventor’s customisation and rules-based environment, which uses code to automate functions at a more sophisticated level.

For 2021 onwards, the team has expanded what can be controlled using iLogic functions in the drawings environment, including dimensions, hole notes and ballooning.

You’ve also got the ability to control drawing styles, which controls how views are drawn, dimension formatting and more.

The Inventor community is still a strong one and the system is as robust and mature as you might hope after two decades of development.

That said, it’s clear from this release that the Inventor team still makes room for new ideas and for total reinvention of existing functionality, where needed.

Many of the updates in this release have been introduced in response to customer feedback and the lengths to which Autodesk will go to meet or exceed customer expectations really stands out.

The updates to drawing automation are a perfect case in point. Users actively want to avoid tedious workflows and automate common jobs such as drawing layout, so they can deploy their time, energy and imagination more efficiently.

The 2021 release of Autodesk Inventor may not be as packed with new features as you might once have seen, but it provides solid evidence of how Autodesk is progressing with the system, with a view to delivering on its promise to keep it as fresh as today’s users expect. 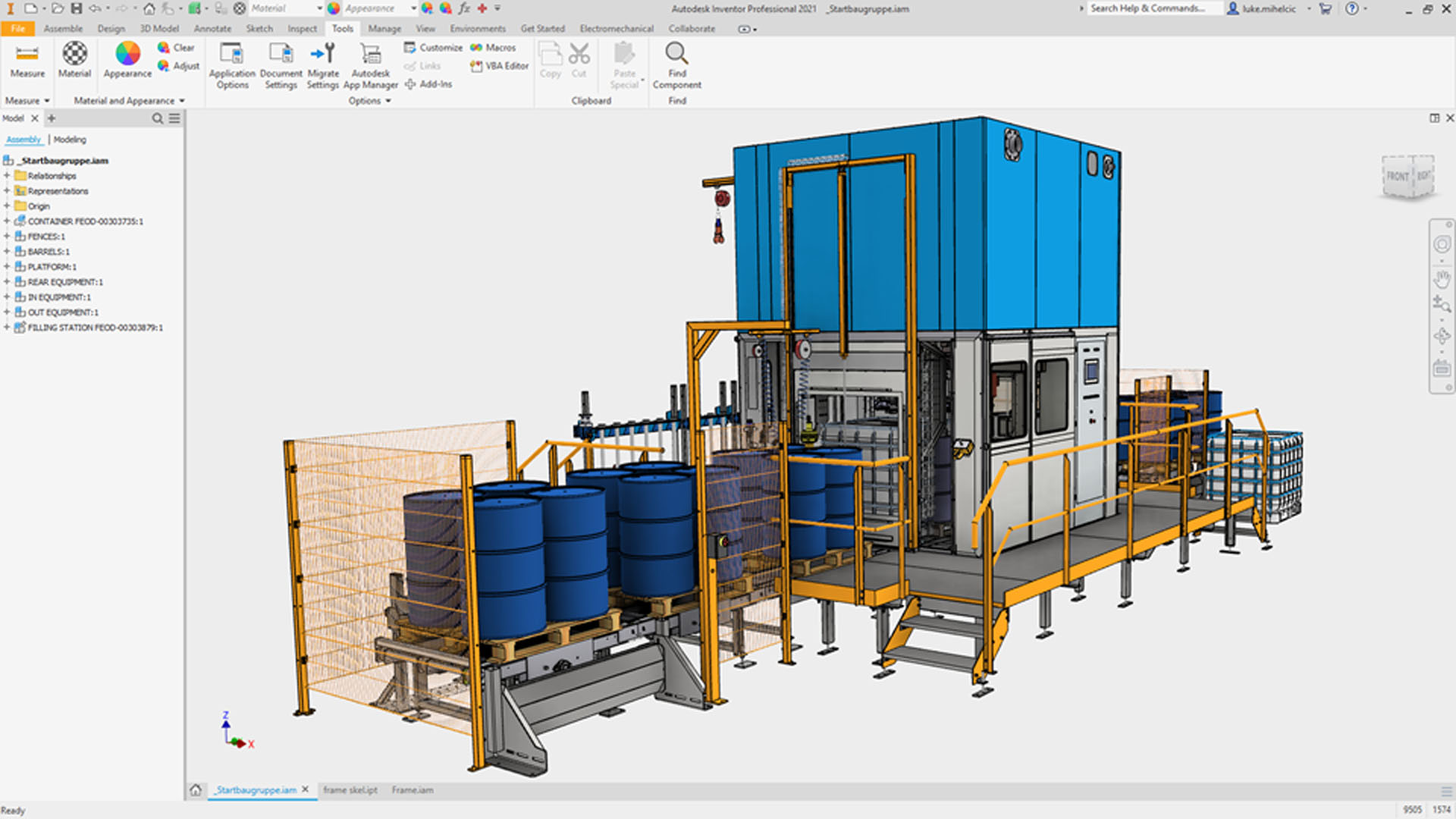 It’s been some time since Autodesk started the move away from perpetual licencing of its products and into the realms of subscription sales.

While this has had repercussions in other areas of its business, the design, engineering and manufacturing crowd was already used to paying for subscriptions as maintenance, so the change wasn’t that large.

At the same time and for the older products, Autodesk also started to offer larger bundles of its software products.

These have been through various names and configurations, but the term ‘Collections’ seems to have stuck for a while (originally, ‘Suites’ was the chosen moniker).

On the manufacturing side, the Collection of choice is the snappily named Product Design & Manufacturing Collection. It costs $2,720 per user, per year.

So what do you get for that?

Basically, there are six core tools. These include Autodesk Inventor 2021 (the full package with all of the add-ons, such as tube and pipe, frames, 3D content and so on), as well as Inventor CAM (which used to be called InventorHSM and shouldn’t be confused with the SolidCAM developed product of the same name) for CNC programming from 2.5 axis right up to 5 axis simultaneous machine tools.

Weirdly, the PD&M Collection also includes a license of HSMWorks, which is much the same thing, but integrated within Dassault’s Solidworks.

Inventor Nesting brings tools for nesting of 2D profiles, built using the tech that Autodesk acquired from Majestic a few years ago.

Alongside this, you get a full subscription, per user, for Fusion 360. It’s worth bearing in mind that the AnyCAD tools have been extended to connect Inventor to Fusion more intelligently in recent releases.

And, of course, you also get AutoCAD; it wouldn’t be an Autodesk bundle without the venerable 2D drawing tool chucked in, would it?

AutoCAD is available to be installed in the form of your choice, whether that’s vanilla AutoCAD, AutoCAD Electrical or AutoCAD Mechanical.

That seems like a lot of technology to sink your teeth into, but it’s not the limit.

Alongside these core tools, you’ve also got access to 3ds Max for rendering and visualisation,

Meanwhile, if reality capture and reverse engineering are your bag, then you’ll probably be interested in Recap Pro, too.