Scan 3XS GWP-ME A124C – With unrivalled single-threaded performance from the Intel Core i9-12900K and impressive GPU acceleration from the Nvidia RTX A4500, this desktop workstation delivers on all fronts, writes Greg Corke

The Scan 3XS GWP-ME A124C is the first review system to arrive at DEVELOP3D with the new ‘Alder Lake’ 12th Gen Intel Core processor. And, from what we’ve seen, it certainly won’t be the last.

Having spent the last 18 months playing catch up with AMD and its impressive Ryzen 5000 Series, Intel now has plenty to shout about when it comes to mainstream PC/workstation CPUs.

12th Gen Intel Core is different to all Intel processors that have come before. It is the first to have a hybrid architecture with two different types of cores: Performance (P) cores for primary tasks and slower Efficient (E) cores, which are heavily focused on maximising performance per watt.

Intel calls this its biggest architectural shift in a decade. The approach is similar to that taken by computer chipmaker ARM, whose technology forms the backbone to Apple’s M1 processor.

The idea behind Intel’s hybrid architecture is that critical software, including your current active application, runs on the P-cores, while tasks that are not so urgent run on the E-cores. This could be background operations such as Windows updates, anti-virus scans, or hidden tabs on a web browser.

P-cores also support hyperthreading, Intel’s virtual core technology. This means every P-core can run two threads, which can help boost performance in certain multi-threaded workflows, such as ray trace rendering. Our review machine’s Intel Core i9-12900K, for example, features 8 P-cores and 8 E-cores, for a total of 16 physical cores and 24 threads.

To help assign tasks to the appropriate cores, ‘Alder Lake’ includes a hardwarebased ‘Thread Director’. This is said to work best with Windows 11, which was released at the tail end of 2021. However, it is also compatible with Windows 10.

Splitting out the CPU into P-cores and E-cores doesn’t mean that highly multithreaded processes simply run on the P-cores, leaving the E-cores idle. In ray trace rendering software Luxion KeyShot 11, for example, we observed the Intel Core i9-12900K maxing out 24 threads.

There are some caveats to this. As with all the workstation testing we do at DEVELOP3D, we turn the Windows Power Plan to ‘high performance’.

However, technology website AnandTech has reported that when the Power Plan is set to ‘balanced’, any app that’s not in the active window automatically goes over to the E-cores. This is an important consideration if you often run computeintensive processes in the background, such as rendering, simulation, point cloud processing, and others. By pushing those processes over to the E-cores, they will likely take much longer. We plan to test this out in the future. 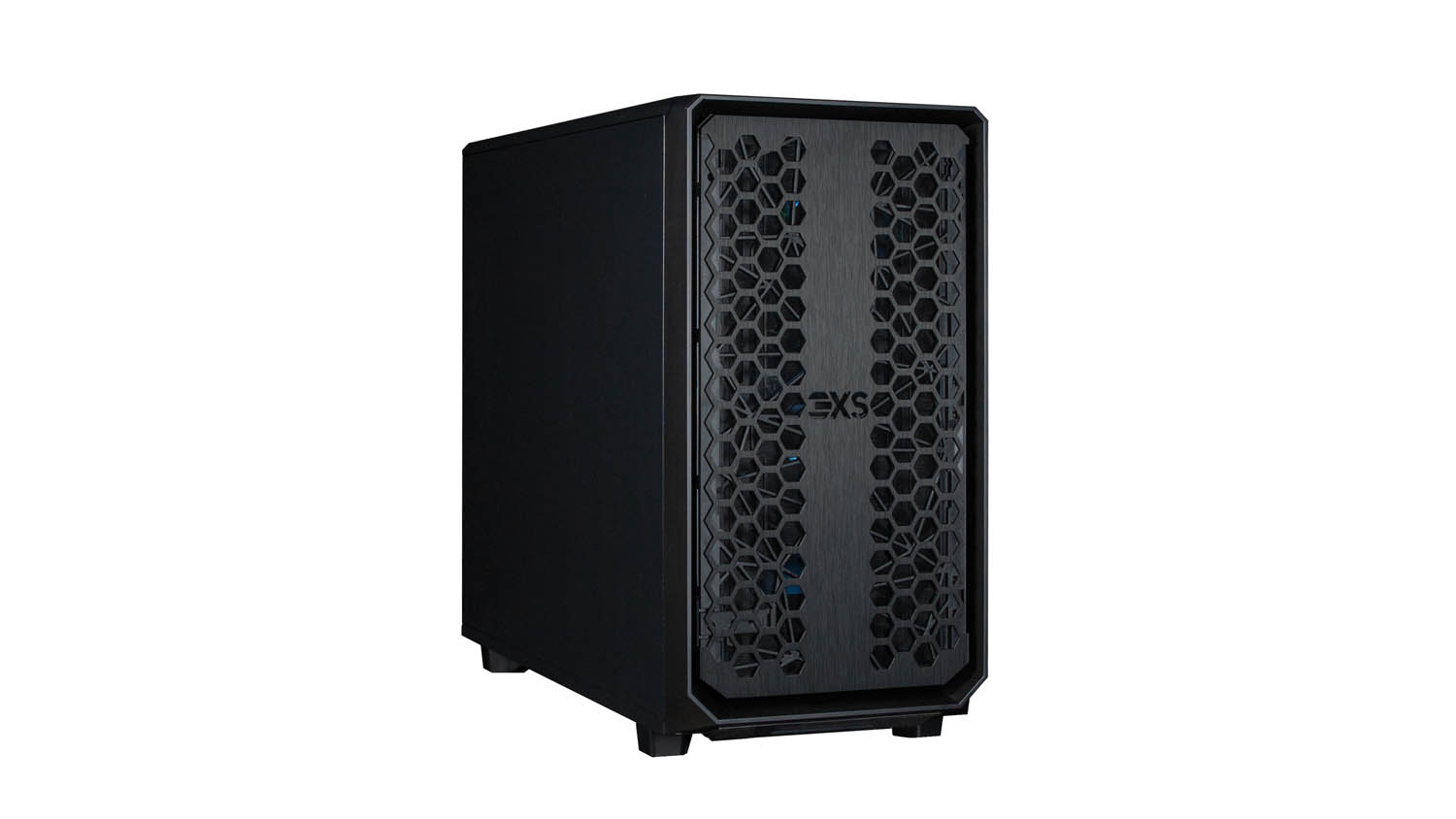 12th Gen Intel Core supports both DDR4 and DDR5 memory, although not at the same time and not on the same motherboard. For the Scan 3XS GWP-ME A124C, Scan has chosen DDR4, matched with the Asus TUF Gaming Z690-Plus WiFi D4 motherboard.

There are two reasons why. First, DDR5 modules are currently very expensive. According to Scan, 128 GB of DDR5 memory currently costs double that of DDR4 (£1,024 versus £578). Second, DDR5 won’t necessarily give you a performance benefit.

In developing the system, Scan tested 128 GB of 3,200MHz DDR4 versus 128 GB of 4,400MHz DDR5, the fastest speed supported in a four DIMM configuration. While the DDR5 system was a massive 47% faster in synthetic test application AIDA, Scan found the performance benefit in real-world applications to be significantly lower. In the ray trace renderer V-Ray, for example, it was less than 1% faster. We would expect similar in CAD applications.

There are some viz-focused workflows that might benefit from faster memory. AMD, for example, has previously highlighted shader compilation in Unreal Engine as one that would. However, while Scan can offer DDR5-based workstations, we imagine most users will stick with DDR4 until prices come down.

The machine was fitted with 128 GB (4x 32GB) of Corsair Vengeance DDR4 3200MHz memory, mostly at our request, so as to allow us to properly test the machine in our demanding Leica Cyclone point cloud processing benchmark (more on this later). For less demanding workflows, going down to 64 GB will shave £250 (Ex VAT) off the system price of £3,583 (Ex VAT).

The CPU isn’t the only new processor in the Scan workstation. The Nvidia RTX A4500 GPU is also a first for DEVELOP3D and forms an important part of this ‘graphics workstation’.

When Nvidia launched this dual slot 20 GB professional GPU late last year, we were a little surprised. We didn’t really see a need for a product to sit between the Nvidia RTX A4000 (16 GB) and Nvidia RTX A5000 (24 GB).

It seems the launch of the RTX A4500 was governed largely by chip availability. Nvidia, like most computing firms, has been hit by the ongoing global semiconductor shortage. According to Scan, the Nvidia RTX A4000 and A5000 have been hard to come by over the last year, something we’ve also observed ourselves. However, Scan says it now has a plentiful supply of Nvidia RTX A4500s.

The RTX A4500 is essentially a cut-down version of the RTX A5000. It uses the same GA102 graphics processor, but with slightly fewer cores, a slightly lower clock speed and a slightly lower power draw. Two RTX A4500s can also be connected with Nvidia NVLink to scale memory and performance, but this is not possible due to Scan’s choice of motherboard. 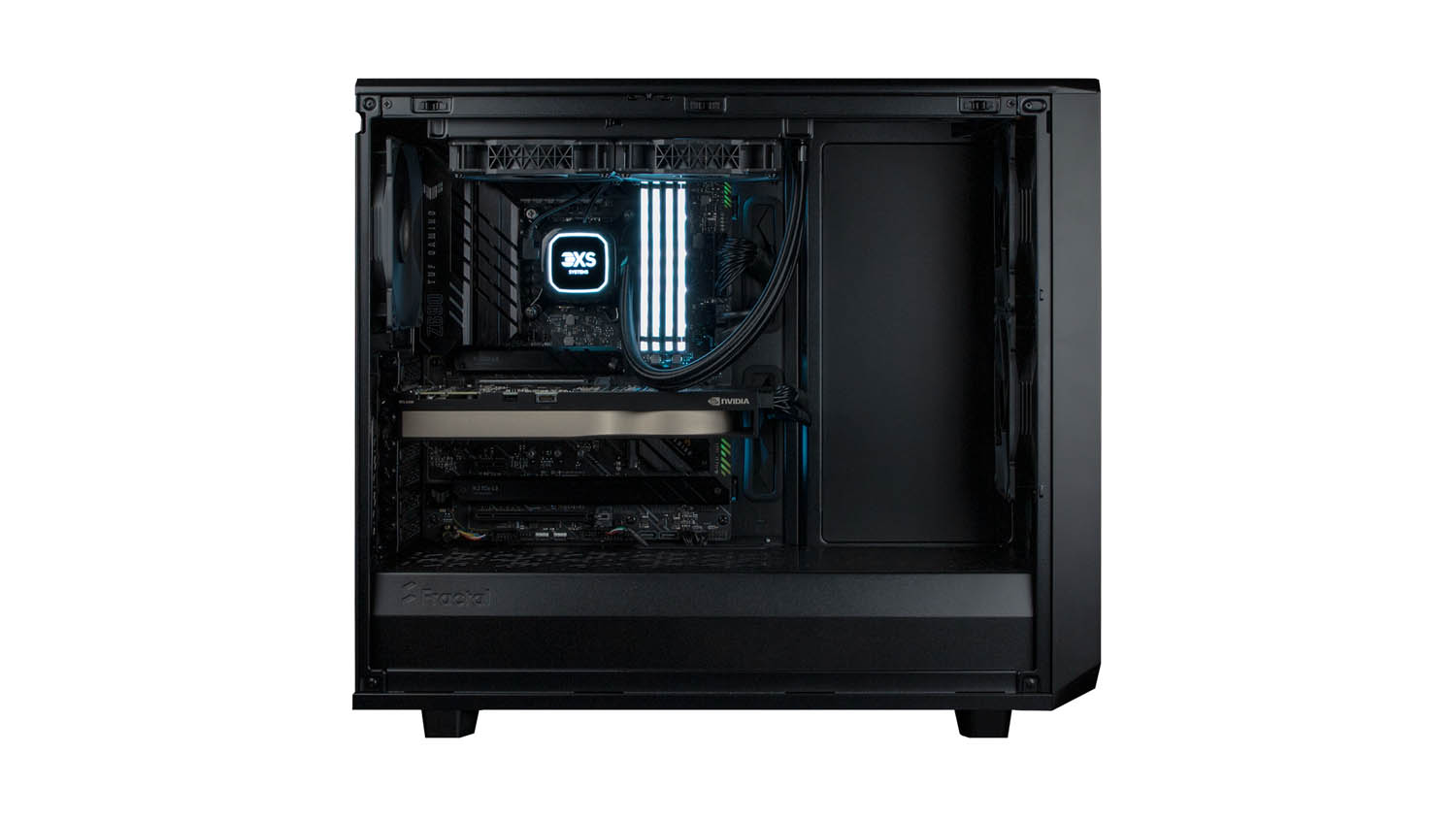 The 3XS GWP-ME A124C is built around Scan’s custom 3XS workstation case, which is available with both solid and tempered glass side panels. It’s a nice sturdy chassis with a 3XS branded vented front that helps ensure cool air runs freely from front to back. A dual fan Corsair H100i Pro XT liquid cooler helps keep the system processor running fast and stable.

In fact, it can maintain high clock speeds over long periods. In KeyShot 11, for example, we observed an all-core frequency of 4.49GHz when rendering for over two hours, although fan noise did rise over time.

To feed all the components, the system drive is a 2 TB Samsung 980 Pro NVMe PCIe 4.0 SSD, which is rated at up to 7 GB/ sec sequential read and up to 5 GB/sec sequential write.

At the rear, it’s got eight USB ports, including two Type C. The front panel has three USB ports including one Type C. A 2.5 Gigabit Ethernet port and integrated Wi-Fi 6 round out the specifications.

With the Intel Core i9-12900K, the Scan 3XS workstation delivered impressive CPU performance across the board, but particularly stood out in single-threaded workflows.

There were also big leaps in multithreaded performance. With higher instructions per clock (IPC) and an additional eight cores, albeit E-cores, the Intel Core i9-12900K has significantly more clout than the 8-core Intel Core i9-11900. In rendering benchmarks V-Ray 5.0 and KeyShot 10, we saw a massive boost of 56% and 71% respectively.

Despite the big advances within Intel, AMD still has a rendering lead with the Ryzen 9 5950X and its 16 highperformance cores. It was 10% faster in KeyShot and 11% faster in V-Ray.

In more lightly threaded applications, however, where processes are distributed across fewer than eight threads and therefore handled entirely by the P-cores, Intel has the lead.

Intel’s generational leap doesn’t extend to all multi-threaded workflows, however. In two simulation tests (Solidworks 2021 SPECapc (Simulate) and Invmark for Inventor 2022 (FEA), the lead over 11th Gen Intel went down to 2% and 5% respectively.

Billed as a ‘graphics’ workstation, it’s hardly surprising that the Scan 3XS GWP-ME A124C also delivers in GPU-centric workflows. The Nvidia RTX A4500 is an excellent choice for those who take visualisation seriously, being well-matched to GPU rendering, VR, real-time viz and real-time ray tracing.

In Enscape 3.0, for example, we got a smooth 35 frames per second (FPS) at 4K resolution with our 9.5 GB office complex test model. The results in Unreal Engine 4.26 were similarly impressive. The Automotive Configurator Audi A5 rendered at 16.75 FPS at 4K with ray tracing enabled (DirectX Ray tracing – DXR) and 31.20 FPS at 4K without (DirectX 12 rasterisation).

Scan brings together these advances in a considered way, in a well-built desktop workstation for professional users. Newer isn’t always better, certainly when it comes to price/performance, and Scan’s choice of DDR4 memory helps bring down costs without negatively impacting performance for most users.

The combination of Core i9-12900K CPU and RTX A4500 GPU offers users the best of both worlds: exceptional performance in single and lightly threaded workloads, with an enviable level of GPU acceleration with capacity for large datasets.

At £3,583 (Ex VAT), however, Scan’s workstation is a serious investment. Configuring with a lower spec GPU would save significant money and still leave you with an excellent all-round machine for CAD and other single-threaded or lightly threaded workflows.

For those focused less on visualisation, the Nvidia RTX A2000 (6 GB) would be an obvious downgrade. However, as with so many technology purchases these days, that config might not be available, due to limited availability of the entry-level Nvidia RTX GPU.

As a closing comment, it’s genuinely exciting to see such intense competition in CPUs that was absent for so many years. At the tail end of 2020, AMD took the lead with its excellent Ryzen 5000 Series. Now, 12th Gen Intel Core appears to be the processor of choice for single and lightly threaded workloads, including CAD.

But Intel certainly won’t rest on its laurels. With AMD set to launch its next gen Ryzen processor (Zen 4) in the second half of 2022, we’re excited to see what happens next.