To help boost supply of its high-end professional workstation GPUs, Nvidia recently released a derivative of the RTX A5000 with slightly lower specs. Greg Corke looks at how the RTX A4500 stacks up in real-time viz, GPU rendering and VR workflows

But these are no ordinary times. The ongoing global semiconductor shortage has meant supply of the RTX A4000 and RTX A5000 has been patchy to say the least. Since these ‘Ampere’ GPUs launched in Spring 2021, they have been very hard to get hold of. And some of the inflated prices we have seen online have been quite eye watering.

Nvidia told DEVELOP3D that the A5500 not only gives customers a bit of a performance boost over the A5000, but improves the ‘overall availability of supply’. The company admits that it would have been limited if it was only producing the RTX A5000 all year long.

With a dual-slot PCIe form factor, the RTX A4500 looks identical to the RTX A5000 and it is much closer in specs than it is to the single-slot RTX A4000.

Compared to the RTX A5000, it has 4 GB less memory, but features the same GA102 graphics processor, albeit with some cores disabled, a slightly lower clock speed and a slightly lower power draw (200 Watts vs 230 Watts via a single 8-pin PCIe power connector).

The feature set of the RTX A4500 and A5000 is virtually identical – four DisplayPort 1.4a connectors, 3D stereo, and NVLink — so two A4500 GPUs can be physically connected to scale performance and double the memory to 40 GB in supported applications. This could be to boost 3D frame rates in pro viz applications like Autodesk VRED Professional, or to render large scenes, faster in GPU renderers like Chaos V-Ray.

The one main difference between the GPUs is that the RTX A4500 does not support Nvidia virtual GPU (vGPU) software. So, if you want to virtualise the graphics card to serve multiple users in a virtual workstation, you’ll need the RTX A5000, A5500 or A6000. 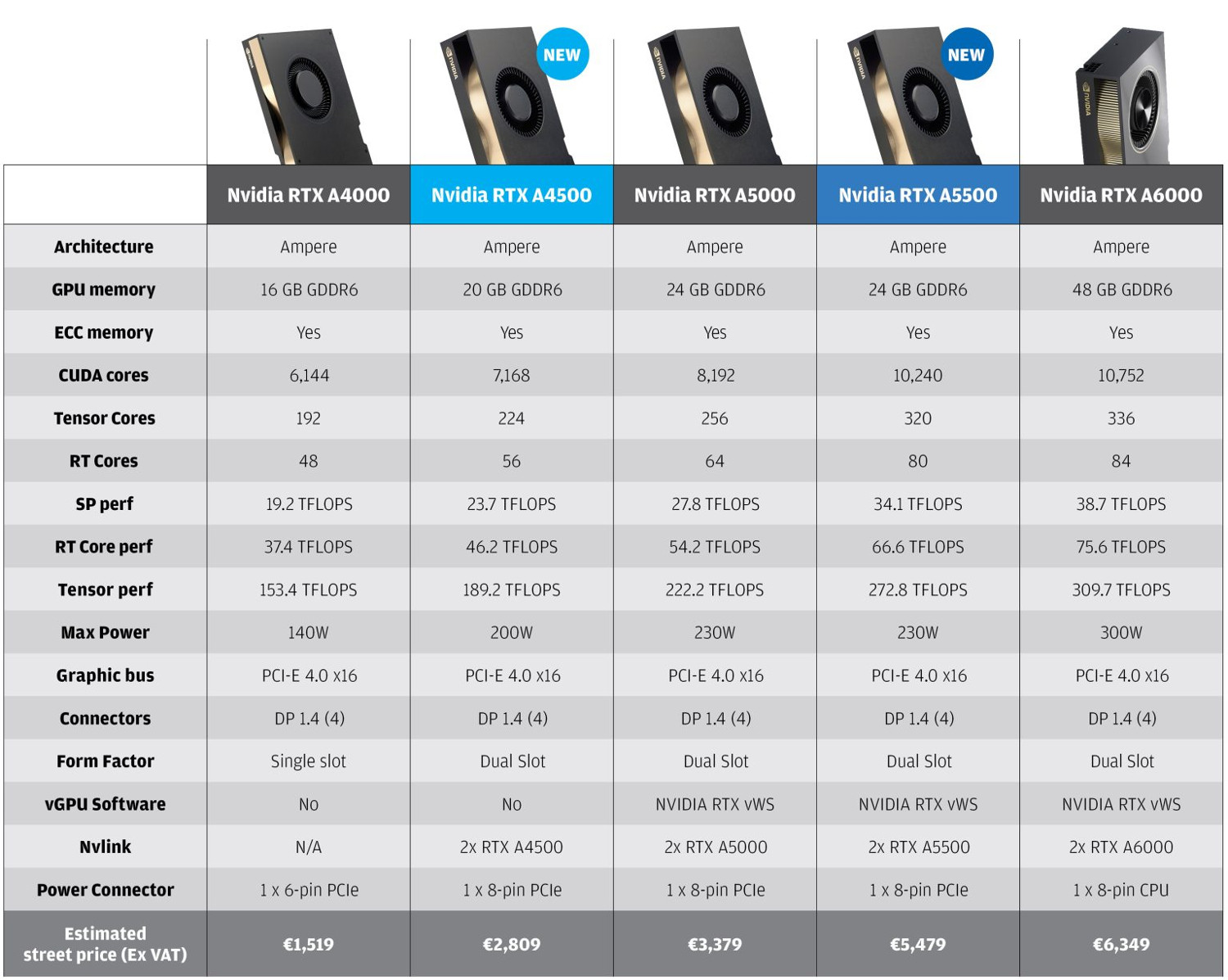 We put the RTX A4500 through a series of real-world application benchmarks, for GPU rendering and real-time visualisation.

For comparison, we tested an Nvidia RTX A4000 GPU in the same workstation. We did not have an Nvidia RTX A5000 in our possession, so took results from our June 2021 review . Back then, our test machine was different, a Scan 3XS GWP-ME A132R with an AMD Ryzen 5950X CPU, running Windows 10 Professional.

With the AMD Ryzen 5950X having a different architecture and lower instructions per clock (IPC), and the workstation running a different OS, there’s a hint of an apples and pears comparison here. However, the results should still give a pretty good indication of relative performance.

One might expect the AMD CPU to bring down scores slightly in some of our realtime 3D tests. However, as most of these benchmarks are very GPU-limited, where the GPU is the bottleneck, rather than the CPU, we wouldn’t expect the CPU to influence the results that much.

In our GPU rendering tests, as the role of the CPU is minimal, the comparison should be very precise.

There wasn’t a huge performance difference between the RTX A4500 and RTX A5000 in our real-time 3D tests. With our automotive test model in Autodesk VRED Professional, for example, the RTX A5000 was between 1.75% and 3.10% faster than the RTX A4500, depending on the level of anti-aliasing applied.

We experienced similar in arch viz tool Enscape, with a difference of 2.85% when testing our large office scene. The RTX A5000 pulled ahead more in Unreal Engine, especially when real-time ray tracing was enabled on the Audi automotive model.

In our GPU rendering benchmarks, the lead of the RTX A5000 over the RTX A4500 was much bigger.

In the Chaos V-Ray RTX benchmark, for example, it was 9.5% faster, rising to 26% in KeyShot 10. This may be because these benchmarks use all three types of processing cores – CUDA, Tensor and RT (see box below).

It’s a very interesting time for professional workstation GPUs, and GPUs in general. While you might have your eye on a specific model in terms of features and price/performance, what you end up buying might be dictated more by what’s available in the channel. UK workstation manufacturer Scan, for example, currently has a ‘significant quantity’ of RTX A4500s available for workstation builds, while the RTX A5000 remains in short supply.

The introduction of the RTX A4500 (and, last month, the RTX A5500) certainly gives customers options. If you’re looking for a powerful viz-focused GPU with lots of memory, then the RTX A4500 and RTX A5000 both pack a real punch. The price differential isn’t huge. And, with a little bit of luck, you may find one that fits your budget and workflows precisely.

What are Nvidia RTX GPUS?

Nvidia RTX GPUs are professional graphics cards designed specifically for workstations. They are standard in most Dell Precision, HP Z, Fujitsu Celsius and Lenovo ThinkStation workstations, and are also offered in workstations from smaller manufacturers such as BOXX, Scan and Workstation Specialists.

Nvidia RTX GPUs tend to have more memory than their consumer ‘GeForce RTX’ counterparts, so they can handle larger datasets, both in terms of geometry and textures. For example, the topend Nvidia RTX A6000 features 48 GB of memory, while the mainstream Nvidia RTX A2000 comes in 6 GB and 12 GB variants. In the higher-end models, the memory includes Error Correcting Code (ECC) support to protect against crashes.

There’s also a difference in software. With special professional graphics drivers, Nvidia RTX GPUs are certified for a range of pro applications and are tested by independent software vendors (ISVs) and the major workstation manufacturers.

Different applications support these cores in different ways. Most CAD and BIM applications, for example, simply use the CUDA cores for rasterisation, to turn vector data into pixels (a raster image).

On the other hand, an increasing number of visualisation tools can use all three types of cores. Real-time arch viz software Enscape, for example, can use CUDA for rasterisation, RT cores to accelerate ray tracing calculations and Tensor cores for Nvidia Deep Learning Super Sampling (DLSS).

DLSS allows scenes to be rendered in real time at lower resolutions and then deep learning-based upscaling techniques are used to output ‘a clean and sharp high-resolution image’. The aim is to boost 3D performance or cut render times.

Other applications that can be accelerated by Nvidia’s RT and Tensor cores include Chaos V-Ray, Chaos Vantage, Solidworks Visualize, Luxion KeyShot, Unity, Nvidia Omniverse, Unreal Engine, Autodesk VRED and others.