Tvilum is one of the world’s largest manufacturers of flat-packed furniture, with its four factories producing more than 8 million items every year – some 200,000 pieces every week.

The Danish company sells its products globally, but maintains that almost every home in its home market contains a piece of Tvilum furniture.

Illustrating its wide and constantly updating portfolio of products is a huge task, and with photography too expensive and time consuming; instead it relies on Maxon Cinema 4D to generate photorealistic images – which although quicker, still posed issues.

With over 1,000 products in the Tvilum catalogue, each one requires 7 packshots – product images on a white background – plus a lifestyle shot. These are then replicated for as many as four different colour variations.

André Lyager, one of the company’s 3D designers, describes the scale of the issue: “We used to spend around one-and-a-half days per colour, including the simple environment shot. That would mean that we had to render for almost 18 months to complete the roughly 8,000 pictures!”

The demand for high-quality rendered images, both for Tvilum’s own website and an image bank for its customers, was putting a great strain on the designers.

“We had tried many different ways to speed up our workflow”, says Lyager. “We tried to animate the rotation of our products, we tried with the Stage Object and so on, but we wouldn’t save any time on it, because we had to sit and rename every single image – which is also a dull process.”

Aware of the problem, Tvilum’s engineering department reached out to marketing to see if they could collaborate and find a way of fine-tuning the process.

The Take system enables the user to store multiple variations of a scene within a single file, including animation, different camera angles, colour and material variations, object visibility and render passes.

It also works in conjunction with Tokens, which helps with the automatic naming of files – leading to conformity of file names and speeding up another dull element.

The optimisation process began with the 3D models, which are created in Solidworks. “We tested out the many different file formats Solidworks can export to,” says Lyager, “WRML was what worked the best for us. It would open super-fast in Cinema 4D, and have almost perfect geometry every time, where the .IGS format would be very slow and full of errors, which we then had to spend time on re-modelling before we could start to texture and set up the scenes.”

Lyager says that the Take System is very simple to use: “You set up your scene as normal, and add a new Take. For every change you want to render out, you only have to Overwrite the changes* and add it to a Take, and that’s it. It’s really easy to use and hassle-free!”

Tvilum estimates that the workflow improvements have boosted the delivery of rendered images by as much as 300 per cent.

“We used to spend one-and-half-days for 7 pictures,” confirms Lyager. “Just last week I made 39 packages, which equals 273 pictures!”

The rendering process might have been accelerated, but the end results maintain the required photorealistic quality – including the lifestyle shots.

Lyager previously only used HDRI lighting for scenes, but has since found that using Area Lights from outside the windows in Cinema 4D is a faster method that generates less noise in the shadow areas.

“I can then add a Sun to the scene and exclude the Area Lights from it, then up the size multiplier to around four, so I get a nice softer light through the windows. But it all depends on the type of environment: if it’s a small hallway or a huge office space, I will light the scene differently.”

IES (Illuminating Engineering Society) lights are also employed when they need to cast lamp light to look genuine. Lyager has this advice when using them: “I think the right way is to calibrate your camera to the default Sun. That way the IES light will be exposed correctly.

“I always tint them a bit, so they appear warmer than the exterior light. There’s a big difference between the different IES lights, so I tend to use those I know how they behave. Also I use the Clay Render/Overwrite material when working with IES. That way I can be sure that the exposure is correct.” 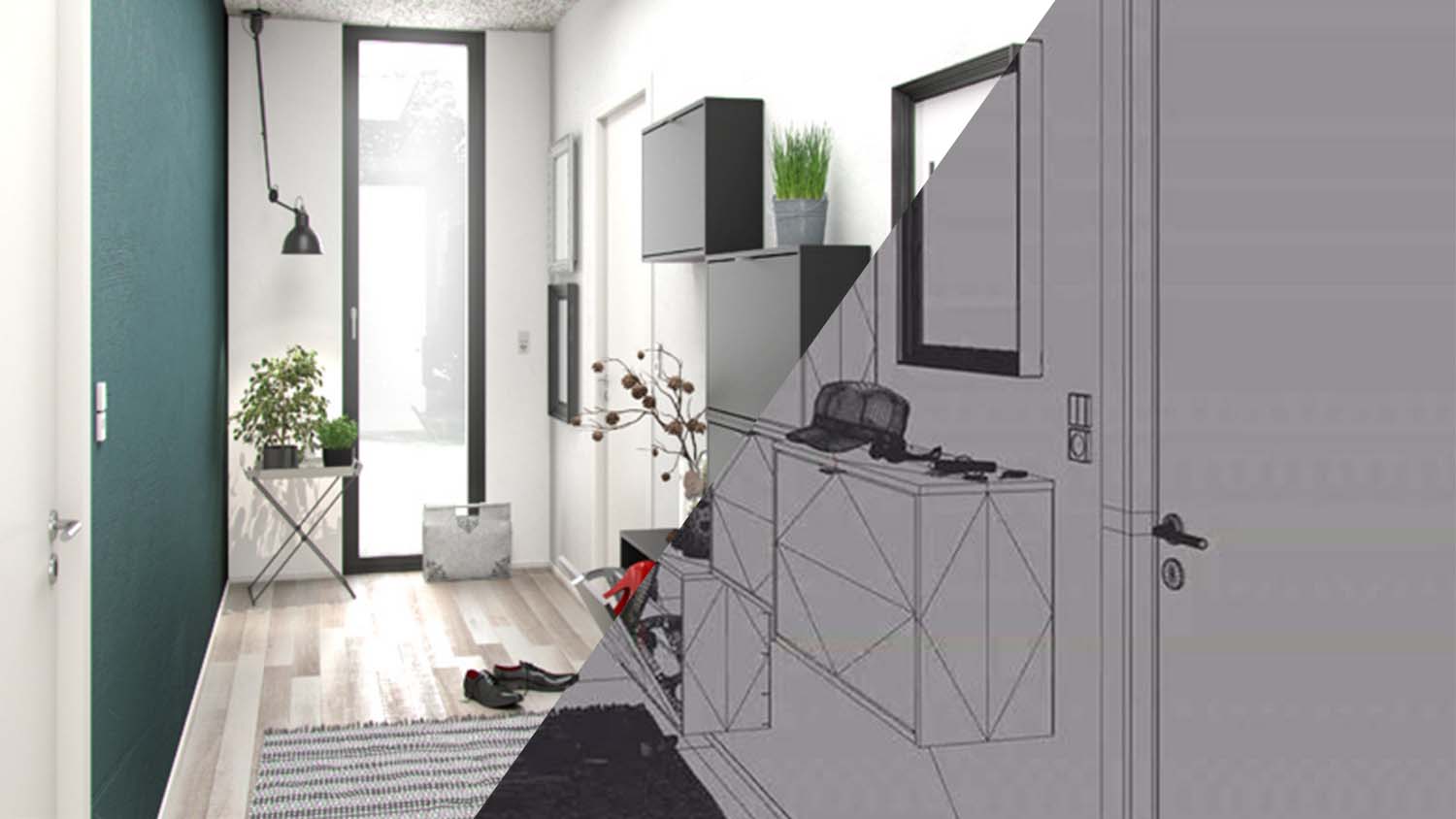 Exterior views of Tvilum products are just photos mapped to a plane, and to speed things up they also use libraries of pre-made models – mainly room decorations – some bought but most built and then re-used. “It saves a bunch of time when we use our own .lib files,” admits Lyager, “It’s a very good investment to spend the time setting them up, and then drag-and-drop them into your scene.”

Product textures comes from the supplier, while walls and floors are bought textures, to which Tvilum’s team add random scratches and dirt maps to add extra reality.

Lyager explains that for the packshots, they desaturate the shadows and make a layer mask of the object, so that customers can turn the shadows on and off*. “Otherwise we just make sure that the Levels are correct.”

As if generating thousands of static images wasn’t enough, the team also creates 360-degree ‘tours’ that you can navigate via the website.

These aren’t necessarily more difficult, says Lyager, just more time consuming: “Every detail becomes visible, so you have to make sure that every object is placed correctly and that the camera is at the right height. But I really enjoy making them, and then see the final result in VR.”

But no matter what tools are used, Lyager says it’s all about the lighting and textures. “Always use a photographer’s approach,” advises the Tvilum designer. “It’s not the camera, it’s the light. And in 3D it all comes down to good textures and lighting.”