But make no mistake: VR and other “extended reality” (XR) technologies are serious, practical applications among professionals in the product development field.

“What VR offers is presence,” says Charlie Fink, a visionary entrepreneur, consultant and author who covers XR as a columnist for Forbes. The technology, he explains, lets developers project themselves into the environment where their creations will exist and function, and environment that may be real or imaginary. No matter how well designs are documented, there is no substitute for being there to experience the product first-hand.

Using immersive technology, designers and engineers can work at life-scale and interact with their creations in an almost-real virtual environment. Product designers use VR to collaborate with colleagues, partners, and customers, and to review design options in real-time.

The technology can accelerate the process of gaining consensus among non-technical stakeholders who may not understand engineering terms but can sign off on a project once they see the results for themselves. Faster approvals can mean bringing a product to market faster and the potential for more revenue, sooner.

Take the automotive industry, where many of VR’s early adopters can be found. Vehicle design starts at the wheelbase—just as it has for decades. But increasingly, the designer will build on a virtual chassis, rendered not in two-dimensional elevations but as a 3D representation in computer-aided design software like CATIA. And in forward-looking shops, designers and engineers collaborate on this work by means of virtual reality (VR) tools.

“Whether it’s a combustion or electric vehicle, you’re starting from some kind of rough engineering diagram or dimensions,” says Oluwaseyi “Shay” Sosanya, founder of Gravity Sketch, a UK-based technology start-up focused on 3D design hardware and software for product designers.

“You have safety requirements. You bring all that information from your CAD system into the VR platform. You create seven or eight different vehicles as 3D wireframes, and then you have your design conferences and reviews. The designer can understand, on a one-to-one scale, at napkin sketch phase, where things belong in the cockpit of a vehicle.”

The automotive industry is in the vanguard of VR adoption, but the technology is taking hold in other fields. Sosanya cites a drone manufacturer, whose designers have laid out all the cabling in the small device, working from a CAD drawing rendered in Solidworks. “The designers virtually zoomed themselves down to the size of an ant to lay out the cabling, exporting the file back to Solidworks,” Sosanya explains. “Doing all the cabling in Gravity Sketch is much more intuitive in 3D.”

The German chemical giant BASF recently devised a plan to add 2,000 users on the Autodesk Fusion 360 CAD platform, primarily to implement a VR style collaboration system for chemical plant maintenance workers. VR enables workers to visualize pipes, joints, structural support and other infrastructure that has not yet been installed—in position and in its designed orientation—using content from Fusion 360.

The system will support BASF’s maintenance and shop floor teams in their collaboration with external partners, for example to create spare parts, or for reverse engineering of obsolete parts.

Indeed, product developers across a growing swath of industries should take note of how the promise of virtual reality (VR) is now resulting in commercial advantages, productivity boosts, transformed employee and customer experiences, and fast-tracked product development.

XR – Extended reality
An umbrella term that encompasses several immersive technologies that extend our sense of reality, by either blending virtual and “real” worlds or by creating a fully immersive experience.

AR – Augmented reality
Overlays digital annotations, visualizations and instructions into a real-world view of an environment or a project, enabling the user to document tasks performed, or take advantage of other experts’ knowledge to complete work more efficiently.

VR – Virtual reality
Immerses users in digital, synthetic environments, allowing designers to experience their creations in distant or imagined settings. It enables remote colleagues to collaborate as if they were in the same location. 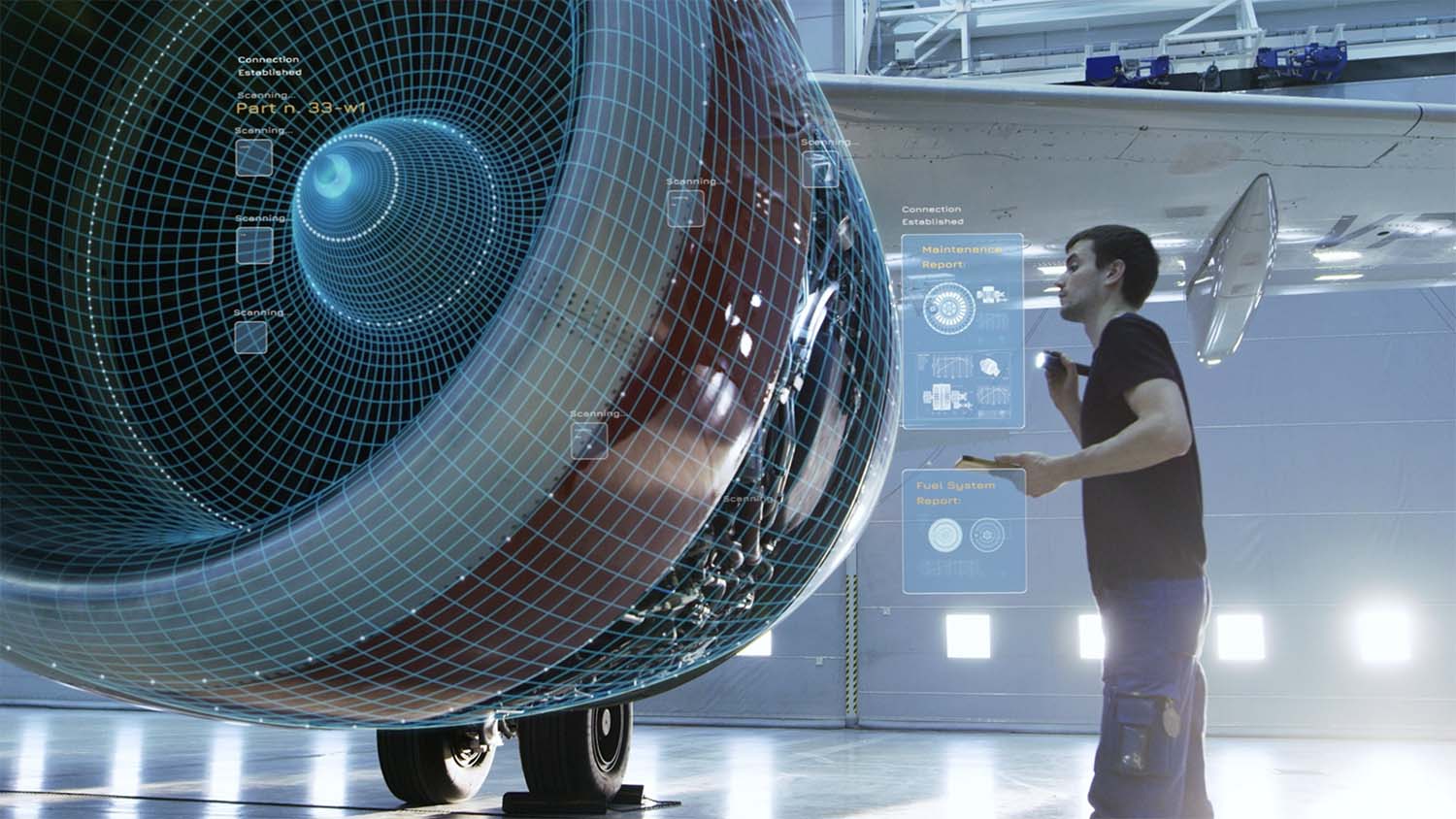 3D CAD software packages are evolving to take advantage of VR integration. And the input that users get from VR technology isn’t limited to the visual. Through hand-held pointing devices, designers can receive tactile or haptic feedback (touch or motion sensations), which can be highly useful in highlighting problem areas in a design. For example, tactile feedback could be used to alert engineers working in parallel on two parts that need to come together in an assembly. Tactile feedback would alert the engineers when the parts do not fit.

Quite often, engineers, designers and manufacturers work in their own silos, and speak different idioms, Shay Sosanya notes. His start-up, Gravity Sketch, seeks to improve collaboration by substituting a “gestural” approach that all stakeholders can learn. “Everyone in the design world speaks in sketches, but those sketches are in 2D,” he explains. “As industrial designers, we sketch in a more emotional, expressive way than the engineers do. If we can sketch in 3D, there is literally no misunderstanding. What you see is what you get. Everyone knows how to pick up a pencil and put it to paper. We wanted to translate that experience to 3D.”

The user experience is guided by some basic rules. “Everything the user does has to be physically based,” Sosanya says. So we rely on gestural interaction, with minimal to no language application. There is no need to read or click multiple times to access a feature. The other principle is immediacy. When you’re creating in traditional CAD tools, you might define a spline, then a centerline, and then punch in the degree of rotation you want around that centerline. That’s three steps; we tried to cut those steps down to one fluid stroke.”

Automotive and aerospace companies are among those pioneering VR initiatives. According to a 2019 CTA survey, 77% of organizations are currently engaged in AR/VR initiatives, ranging from wide use within organizations to projects in the discovery or proof-of-concept (POC) phase [1].

VR also saves dealerships on floor space for display vehicles. For instance, a VR booth with a head-mounted display (HMD) allows customers to take a virtual seat behind the wheel of the car and walk around a virtual vehicle.

The COVID-19 crisis brought increased attention to the problem of remote collaboration, and to the potential of XR/VR to enhance cooperative design, notes Bart Massee, Senior Manager and Creative Director for the Global Advanced Design & Strategy team at HP in charge of print experience. ”Using VR to bring people together in a shared design space is a huge opportunity that we’re working on,” he says.

Massee believes computational design is changing the landscape. “With algorithms deeply embedded in the design process, you can now ask, ‘what is the right role for humans?’” he muses. “Human designers breathe soul into matter. The algorithms could produce okay products by themselves. The designer’s biggest role is to bring the humanity that makes the product desirable to own.” 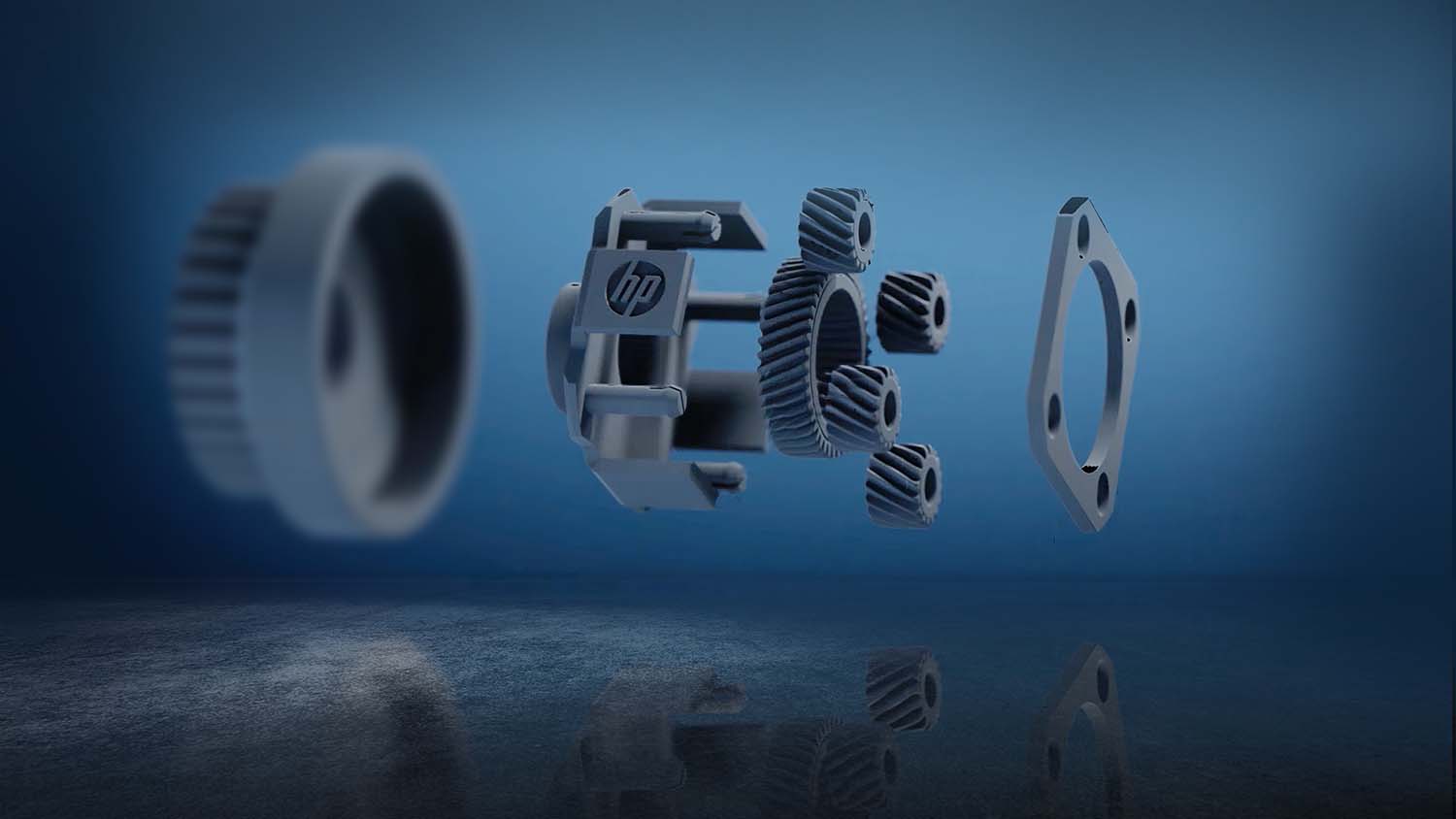 In the workforce and beyond

VR for manufacturing allows product development teams to save on costs and time by simulating products prior to manufacturing. For instance, while digitally developing a helmet, a designer can stress test it in an actual flight simulation without the need for a physical prototype. This allows for early design optimization and detection of typical failure points, reducing waste and production cycle time. Bart Massee says. “If we can do half of that in VR, we can save enough money to justify buying multiple Z by HP workstations with HP Reverb headsets.”

By combining VR with other emerging technologies such as 3D printing, Internet of Things (IoT) and artificial intelligence (AI), VR will allow developers to visualize real-time data insights from IoT devices and carry out repairs and maintenance work. These technologies can digitally transform the way we work—advancing the output of the existing workforce and accelerating production methods [3]

The technology is here now. It’s really about the designers who want to run with it

The technology can take the place of 3D models, which product design organizations typically source from high-end model shops or generate themselves using machines that represent an investment of hundreds of thousands of dollars. “Real-life review of proportions—which may involve tolerances at the scale of 5 mm—are hugely time-consuming,”

Shay Sosanya sees the potential for VR to make possible unheard of levels of product personalization. “We had a designer who scanned his head into 3D design software, brought it up in Gravity Sketch, and created a helmet,” he recalls. “It had perfect ergonomic fit, defining the exact dimensions of the foam and the aerodynamic nature of the helmet, all custom and tailor-made. That’s the future of design, 3-D printing and virtual reality—being able to have that level of detail and customization. The technology is here now. It’s really about the designers who want to run with it.”

This new industrial revolution of XR, automation, and 3D printing leads to an increasingly capable and intelligent workforce. Professional engineers in manufacturing and construction will narrow their focus on analyzing and construction, while using computers to quickly develop options for solutions. This will create both new challenges and new opportunities [4].

Companies that do not implement VR technology will be at a competitive disadvantage when it comes to not just acquiring talent, but also effectively operating in a digital world. 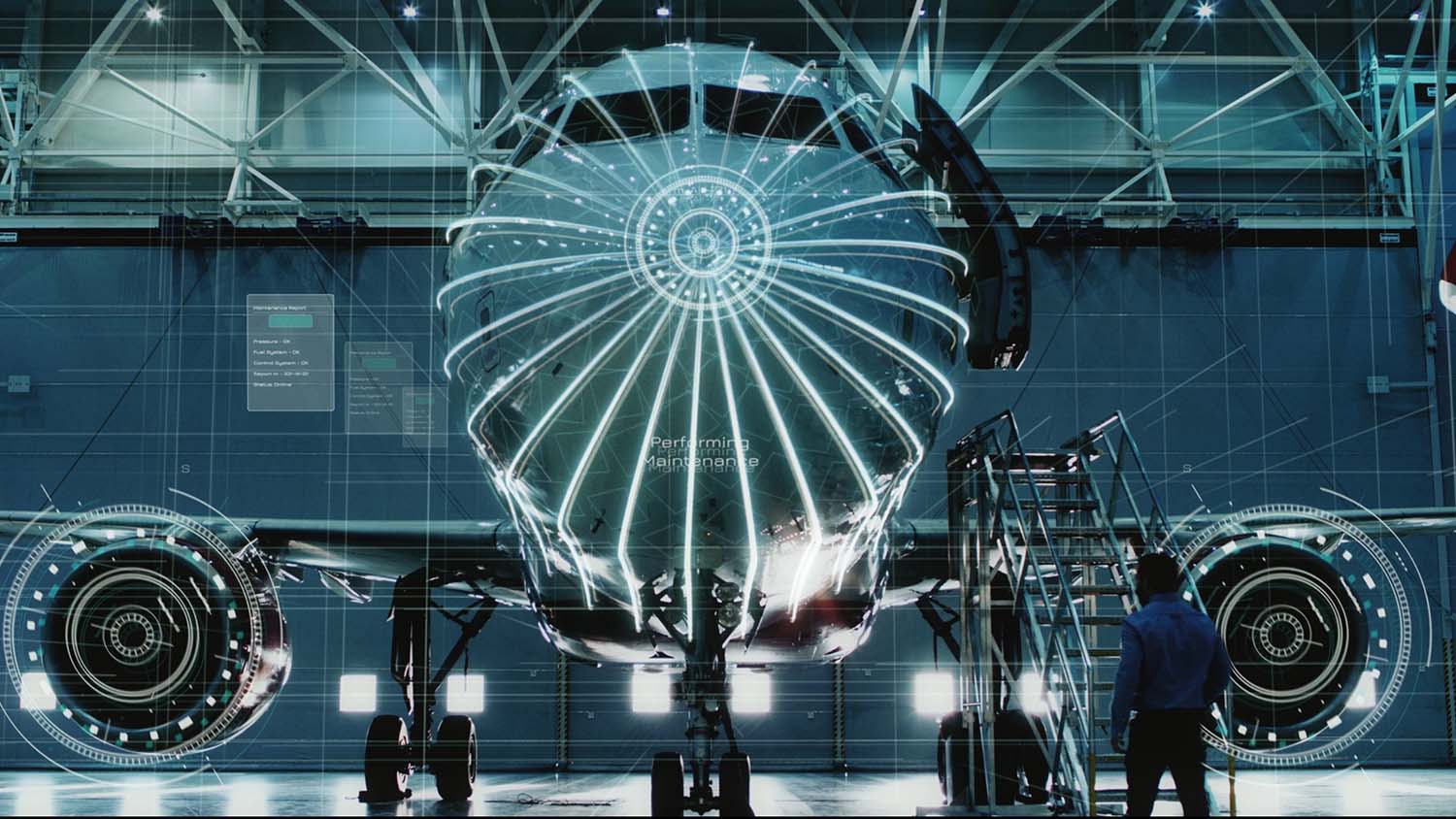 VR technology is evolving. Headsets need to get lighter and more comfortable, and download speeds need to be faster, Charlie Fink suggests. The introduction of 5G telecom networks promises to increase both speed and data capacity, potentially eliminating the slight but noticeable signal lag (latency) that makes VR disorienting for some users.

VR systems ultimately may eliminate certain physical or wearable interfaces. Some interfaces such as virtual keyboards can be projected onto surfaces as needed, and developing projection systems will be aware of the technician’s location, so that the projection can rotate its perspective as the operator moves around the workspace.

In the future, VR technology will enable greater interactivity with virtual environments and better collaboration at lower costs. It has the potential to extend beyond visual and audio experiences to include temperature, smell, and touch. 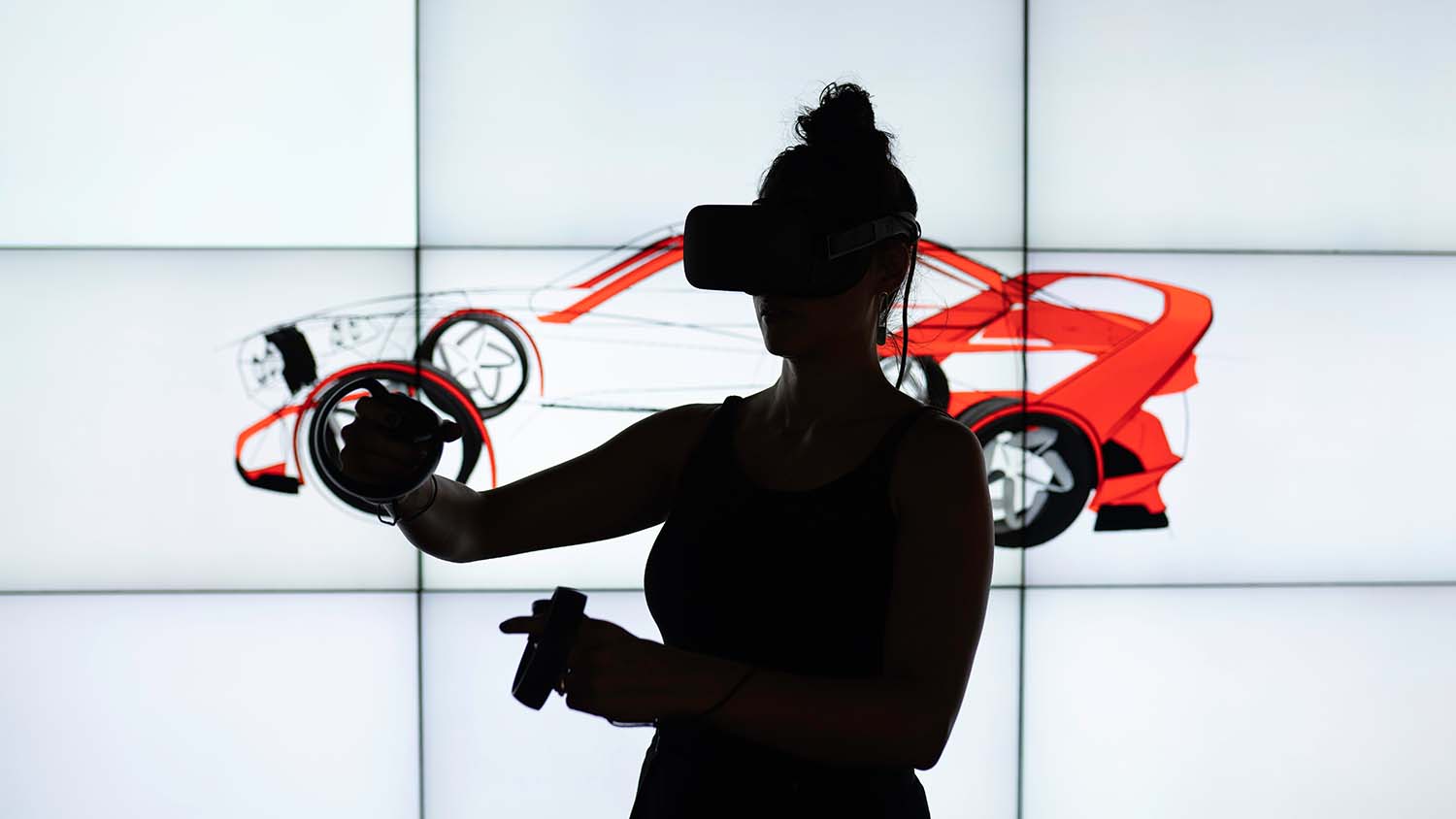 Expectations for the future vary across companies. Three in four companies who responded to the 2019 Consumer Technology Association (CTA) survey expect VR to grow in importance over the next two years. Respondents from four key industries—technology, media, telecom (TMT), architecture, manufacturing, and automotive & aerospace—expect their VR initiatives to see more investment in two years compared to today. These sectors have a relatively higher adaptiveness to VR technologies based on the extent of suitable use cases and available spending power on tech solutions [1].

Business leaders express high levels of optimism regarding future adoption of XR: About two-thirds expect to roll out XR technology more broadly with-in their organizations over the next year [1].

That growth in adoption for “serious” professional applications of VR may happen under the radar, from the perspective of outside observers. The technology is flashy and fun, but promoters need to call attention to its more utilitarian attributes. “Most users that VR developers are targeting are in the gaming space,
with the exception of HP, which has a really deep position in the enterprise world,” Shat Sosanya says. “To
build beyond the academic level, we need to provide easy access and get people to use the software in a more casual way, and make sure the user experience is broadly accessible.”

Z equips designers with VR solutions they need to fuel their creative evolution.

Check out more at: hp.com/product-designers.

©2020 HP Development Company, L.P. The information herein is subject to change without notice. The only warranties for HP products and services are set forth in the express warranty statements accompanying such products and services. Nothing herein should be construed as constituting an additional warranty. HP shall not be liable for technical or editorial errors contained herein.

3 PwC, “How manufacturers can take control of digitally transforming their workforce,” usblogs.pwc.com/industrialinsights/2018/05/08/how-manufacturers-can-take-control-of-digitally-transforming-their-workforce.

4 Redshift by Autodesk, “Robots in the Workforce: Automation is a New Era for Engineers,” https://www.autodesk.com/redshift/robots-in-the-workforce.