It’s the sirens and lights that usually alert you to the fact that the car in your rear-view mirror is a police vehicle. With the new Ford 2020 Police Interceptor, that might not happen. Instead, the Interceptor could silently glide up behind you in electric mode, so you wouldn’t know you were in trouble until the very last moment.

In other words, it’s a stealthy beast. The typically mild-mannered, ‘soccer mom’ favourite, the Ford Explorer SUV has been redesigned from the ground up as a serious, specialist law enforcement vehicle.

“Everything, from how we spec the engine, to the gear ratios that we use, the shocks and springs, some of the brake components, are upgraded and massive in size compared to most of the retail variants,” explains Ford’s global chief engineer Bill Gubing, a man who has clearly enjoyed working on this project.

The rethink extends to wheels and tyres too, he adds. “[This is] much more of a performance-orientated tyre, and also wheels that are designed for durability. These guys run over kerbs with them!” The Explorer platform may have been leveraged, and many of the sheet metal body parts are the same, but everything underneath it has been completely purpose-built, reinforced and upgraded for US police forces.

This is a much heavier duty vehicle, engineered to take ‘really extreme’ loadings on its chassis and suspension.

“They run over stuff !” says Gubing, seemingly still in shock at some of the stories he’s heard, among the masses of research his team has conducted with real police forces.

“Like I said, kerbs are just one of the things. You’ll hear officers telling stories of how they drove down a set of stairs; how they did a really deep median [central reservation] crossing, or took it out on the beach – very different to the average customer use.”

Gathering this knowledge involved spending vast amounts of time with police officers and different agencies across the US. Ford has assembled a Police Advisory Board, numbering nearly 50 members nationwide, that the company can turn to when it wants to discuss police needs for the new vehicle.

“There’s officers and fleet managers on the board, so it’s really about understanding how they’re going to use the vehicle,” he explains. “We’ve done ride-alongs with different agencies, so our engineers have been sitting in the front seat, experiencing the job first-hand. We’ve done a tremendous number of visits to their agencies and through their garages and repair bays. We’ve been to their command centres, watching how units get dispatched and what information is sent back from the vehicle – so a really deep customer knowledge.”

This ‘human-centred’ approach generated a long list of key criteria for the design and engineering team. As this was a new platform from the ground up, Ford could incorporate all this learning straight through its design process and into the end product. 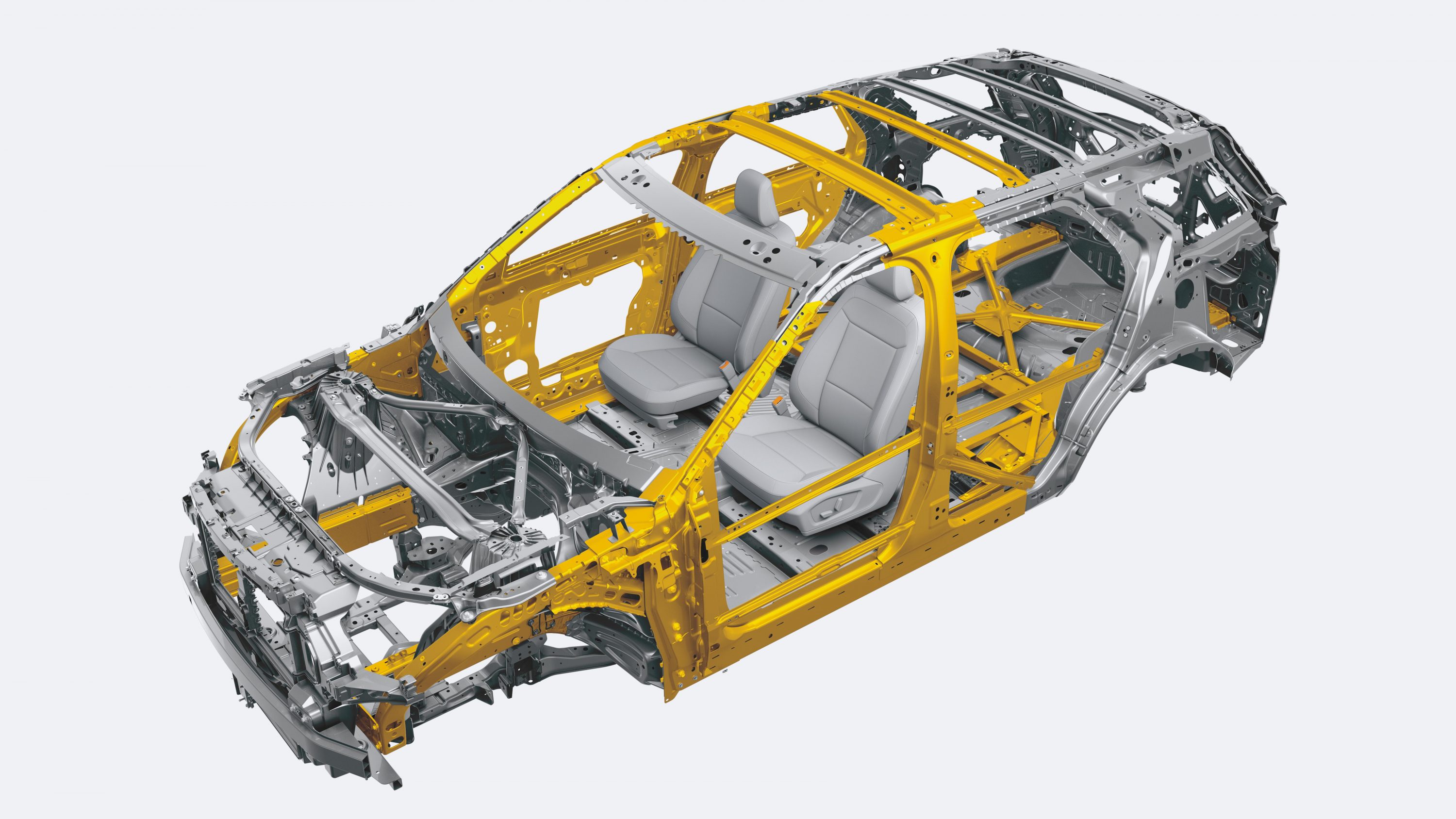 A lot of the expected usage of the car is more sedentary than the off-road pursuits the chassis is capable of handling. With this in mind, the 2020 Interceptor was engineered with a 3.3 litre hybrid drivetrain in mind from the start.

So much of the vehicle’s daily use is sitting at idle, whether at the side of the road or at the scene of an incident. “Because of the hybrid battery pack, we can then turn the engine off and run all auxiliary systems off the battery, so they get a huge improvement in idle fuel economy, which relates to a 40% improvement in overall fuel economy.”

This greatly helps police agencies reduce their operating budgets, as do other features, such as the universal mounts that allow police forces to switch their existing equipment – like radios, light and siren consoles, and radar guns – straight over into the new vehicles.

The interior features numerous ‘human-centred’ design tweaks, some of which you’d expect – such as extra legroom (both in the front and back) – and some that might only occur to an active officer.

“This is their office, that is their office chair,” explains Gubing of the Interceptor’s cabin. “Anything we can do to make it more comfortable for them is really important.”

One of the key issues the design team picked up on was the problems caused by bulletproof vests, which make it very difficult for officers wearing them to bend at the waist.

Gubing brings up the issue of how even closing the door was a problem in the old models: “If you watch them close the door on a regular basis, they’ll use their left foot to kick the door and bounce it off of the hinges, so that it comes back to them and they can grab it,” he explains. “That’s an interesting use case, and not something we’d expect a retail customer to do!”

The immediate solution was to use much stronger door hinges, but after some FEA analysis and prototyping, Ford also added a check strap that handles all of that loading and weight, so the door hinges and the body structure is not tearing. This reinforcement also creates the opportunity to have a ballistic panel inside the door structure.

“Depending on the level of panel that you have, you can add on almost 100lbs to the door, and then be kicking it with your foot – you can really have some severe stress loads in those hinges.”

Ford uses Catia for its CAD, and a raft of simulation software, but these only go so far towards resolving these really unique problems. Gubing’s team prefers to use digital models and data to point them in the right direction, but subsequent physical prototyping takes precedence.

“That really allows us to take a look at the body structure as well, and how that all interacts, and to put some weld variations in the system and so forth,” says the chief engineer.

“CAE is a really powerful tool to get you in the ballpark, but it is still a production environment where there’s enough variability going on that physical tests still have good benefits to us.” 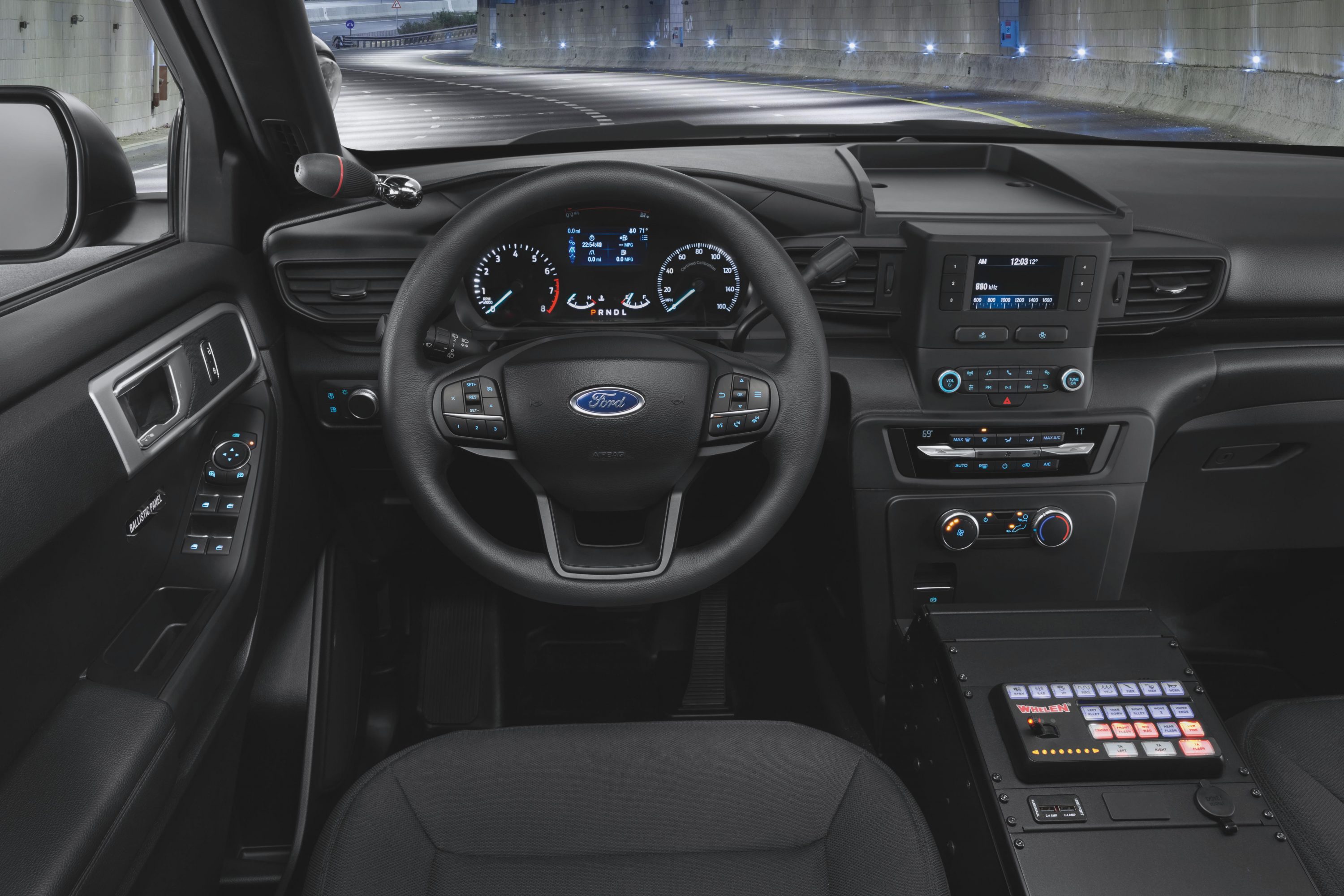 With a clean slate to work with, the design team turned to familiar automotive prototyping tools – clay model demos, foam model demos, and bucks – but for the 2020 model, virtual reality (VR) was also used as a means of early testing for the design and layout of the Interceptor’s cabin.

“We would put the people in the VR demo and first we just had a basic interior of a police car simulated in, and people could pay attention to the different warnings and so forth,” explains Gubing.

“Then we introduced lights and sirens into the VR headset – a flashing light strobe going off and the sirens wailing in the background, and voices coming over the radio – very much a realistic police environment, and then watching how people interacted with the car and so forth.”

While some of the experienced officers could tune out all the background and focus on what needed to be done in the cockpit, others struggled – flagging up the benefits of a lot of autonomous features the design team had thought out. 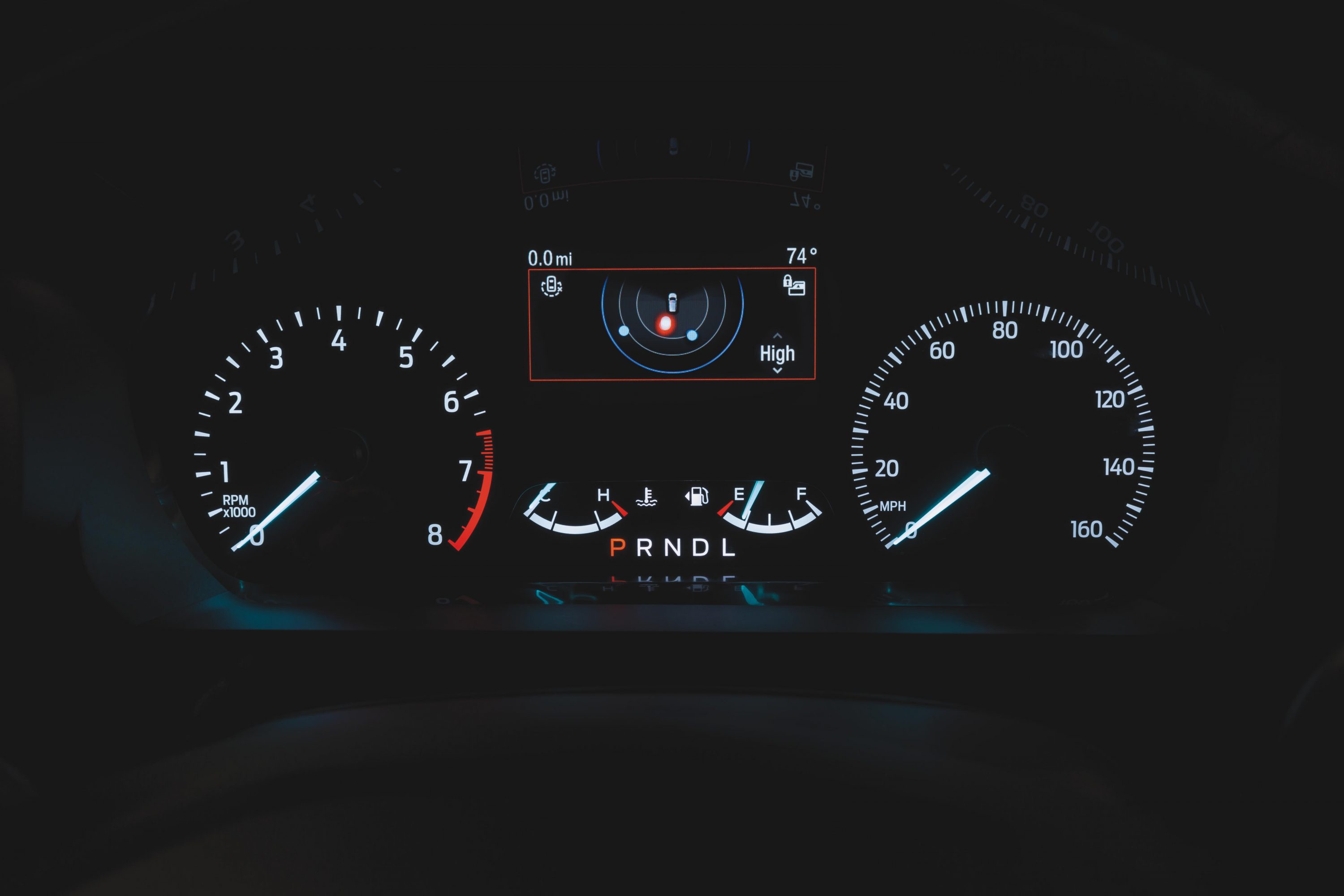 One such creation is the new Perimeter Alert system, described by Gubing as another layer of safety and protection for officers when they’re sitting in those cars.

In the retail version of the Ford Explorer, there are rear parking sensors and a camera. The development team came up with the idea to pull all of that together and, with some adjustments, use it to sense potential threats moving behind the car in a 270-degree radius.

“The radar can detect if the object is moving closer to the car, if it suddenly changes speed, anything that would indicate a potential attack from behind. And they can watch that on a screen inside the cluster – little blue or red blips on the screen,” he says.

A red alert automatically turns on the rear camera on, locks the doors, rolls up the windows, and gives an audible warning inside the car to get the officers’ attention.

VR testing helped develop this idea, along with the positioning of the alerts, dials and fixtures inside the cabin, helping engineer a workspace that is super-efficient and functional.

Ford Motor Company has been using VR since 1999, and its ability to know where and when to use it has advanced significantly since then, along with the software and hardware.

Yet the physical methods are still relied upon alongside VR for getting real human feedback all the way through a project.

After all, this is going to be a vehicle that must be trusted by thousands of officers, as well as millions of civilians, and the testing needs to reflect that, and be as rugged as any potential task the Interceptor might be called upon to perform in the line of duty.