The harbours of the world have their own towering skylines, peaking with the giant cranes used to unload mammoth transporter ships of their containers.

Liebherr is an expert at engineering on a large scale, designing and building cranes, excavators and mining trucks amongst its vast portfolio. Out of its family of colossal maritime cranes, the LHM range is a mobile lifting machine, that gives its users versatility over what it can lift, and where from – using a wheeled base for mobility alongside the vessel from which it’s unloading.

Designing something of this magnitude is a long process, with assorted challenges, requiring a great deal of research and analysis beforehand. Liebherr’s LHM mobile lifting machine, which uses a wheel base to position itself alongside vessels, can lift a whopping 200 tonnes in one go.

Walter Mietschnig, senior design manager for mobile harbour cranes, offers that this operates around the need to quantify the geometry with the system calculation. “All system boundaries – weight, transport – and the drive system were defined and clarified.

“A first system model on the basis of a 3D Pro/Engineer model was prepared including all main components, their arrangement and required space as well as their accessibility. For the steel construction an optimal force flow was investigated,” he adds.

After the first model was created a calculation of the stability and strength was created. “The finite element program Ansys was used with an iterative process of optimisation of geometry, structure, and force flow in order to reach minimum costs by a maximum of customer value,” says Mietschnig.

The end product is a tower characterised by a tubular design that gives it stiffness and torsion resistance, while balancing the weight to allow smooth movement when the crane rotates.

The most enormous of the LHM range, the 600 model, is capable of raising over 200 tonnes in one lift, roughly the same as the Statue of Liberty, without toppling over.

The handling of containers is tricky work; their bulk and weight requires a machine with strength simply to lift them, but also poise and balance to be able to stack them five high.

Using an extending arm to lift and manoeuvre containers in all directions generates an enormous amount of stress and strain, all of which has to be balanced by a relatively small body riding on pneumatic tyres.

Designed to be quick, stable and for ease of use on the crowded harboursides of the world, the Reachstacker from Hyster, was developed with input from all areas including engineers, end users and the company’s training department. 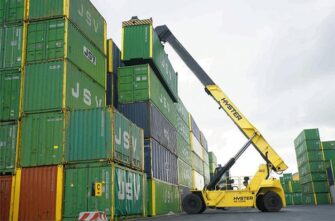 For the design of its aptly named Reachstacker, Hyster uses a wide range of tools including bespoke stability analysis software

Pro/Engineer was used in the design stages, with models put through strength and strain analysis, before pilot versions are subjected to rigorous stages of testing to allow it to handle containers stacked as far away as five high and three rows back.

Product manager for Hyster’s Big Trucks department, Antoon Cooijmans, explains how they have advanced their use of 3D design to include systems for all aspects of the Reachstacker’s design. “We have specially developed software to calculate the stability of the truck,” he explains.

“This software is used for the load moment indicator to protect the truck against the danger of tipping over or sideways. To simulate the hydraulic system, automation-studio is used. “Our 3D CAD system does have several add on modules for hose-routings and wire-harnesses.”

The name Hyster originated from the call of 1920s’ forest workers in the US who would shout “Hoist’er!” when a log was ready to be lifted.

A gantry crane is a large frame that can shift a weight anywhere within the area below; add some dinky rubber wheels and it can career around a dockside with glee.

The Rubber Tyred Gantry (RTG) crane is a smaller, more lightweight version than its heavyweight cousin that is used on engineering sites around the globe. The mobile RTG crane is preferred for the task of manoeuvring amongst the stacks of containers on the dockside and ordering the cargo into neat piles.

The Kalmar RTG crane puts this into consideration by being motorised by either an onboard diesel generator or a cable system to provide electrical power for both the mobility of the vehicle and the crane system. Its power package is designed for ease of repair and is at ground level with the electric housing close by on top of the lower beam.

RTG marketing manager Marko Rasinen explains that its model is developed year-on-year, working to improve on a variety of issues.

“Starting from the basic ideas, the concept was simplicity, with light structures, low fuel consumption, a design that makes the crane easy to service and reliable,” points out Rasinen, adding that from the initial stages and research the design is moved into Catia to build a 3D model that can be tested for structural strength.