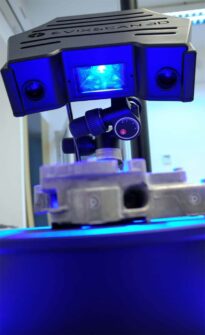 The Optima+ M from Evatronix is the company’s latest blue light 3D scanner, updating on its predecessors with several time saving and ease of use features.

Replacing the Heavy Duty Optima model, Optima+ M is a designed for precise scanning of medium-sized objects ranging from 70mm to 1m.

The new model is reportedly four times quicker over a single scan than the model it replaces, taking roughly 1.2 seconds. Evatronix explains that thanks to that the external factors have less of an influence on the process quality.

The scanning area is also increased by 43 per cent compared to the previous model, with a single scan able to collect measurement data from a volume of 320 x 190 x 120mm.

Despite the extension of the scanning range, the quality of the scans is maintained, with the Optima+ M scanner able to produce a high density of scanning points (117 pts/mm2), and its accuracy ranges 0.009 mm.

Its engineers say that this is the result of using high-speed 7MPx cameras and projector using a modern DLP chipset, which allows it to achieve more accurate measurement results despite the increased scanning range.

Compared to its predecessor, Optima+ M has a reduced distance between scanner and the scanned object, which facilitates tighter operations. Set-up and use is also improved, with the elimination of the previous HDMI cable – only USB 3.0 are now necessary to connect the scanner to the computer.

Evatronix has made great efforts with previous models to integrate them into automated robot/cobot workflows, and the Optima+ M is no different. Due to its light, compact design it can be easily attached to an arm, and software supports scanner integration with Universal Robots, HAN*S and Kuka cobots/robots.

“We designed Optima+ M with to make it as versatile as possible in various industries,” said Evatronix R&D lead Szymon Ścibik. “Thanks to the proper selection of components, we managed to create a measuring device that achieves high accuracy results while maintaining a large scanning area.”