SAF technology is used to jet ‘high energy-absorption’ fluid onto selected areas of each layer of powder in a single, full-width pass.

The industrial piezoelectric print heads jet single or multiple drops of the fluid to produce either fine detail or large areas, without compromising throughput, while infrared energy is radiated to fuse the selected areas and the underlying particles. 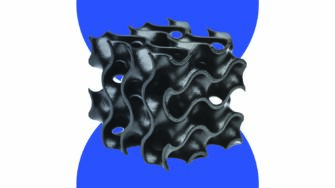 Stratasys says its H Series will support “unique, high-specialty, functional fluids to process a broad range of powders”, and suggests that the H Series’ thermal control has been fettled to avoid common binder jetting problems such as warping, quality fall-out, and helps to reduce the necessary peak temperatures required in the bed, making SAF technology ideal for long stint production.

Little has yet been mentioned about what powders will be available at launch, although the sample parts shown are reported as PA11, while Stratasys states that like other powder-bed fusion technologies, SAF is able to process a wide variety of polyamides and elastomers.

“Representing the culmination of more than 10 years of research and development, SAF-based 3D printers can deliver a competitive cost per part at production level throughput and with the part quality, consistency and reliability that ensures satisfaction and high production yield,” said a Stratasys spokesperson.

The launch comes as Stratasys plugs the gaps in its market offering, having recently acquired SLA technology through RPS, and DLP expertise through its $100M buyout of Origin.

SAF 3D Printing has been in the pipeline publicly since Xaar 3D and Stratasys partnered in summer 2018 to leverage Xaar’s industrial piezo inkjet printheads, taking aim at HP’s MultiJet Fusion binder jetting technology, which has grown at a rapid rate.

Initially billed as ‘High Speed Sintering’, it remains to be seen how the Stratasys SAF matches up to the latest line of HP MJF production units, which have stolen a march in terms of large scale installs (including Stratasys’ own online manufacturing portal Stratasys Direct), as well as complementary industry partnerships, such as those with Dyndrite, DyeMansion and AMFG.

Professor Neil Hopkinson, director of technology at Xaar 3D and original inventor of the technology behind SAF, had this to say: “SAF has built on the original ideas behind HSS, but taken it forward in a number of ways to remove sources of variability in the process.
“For example, SAF employs a process architecture that ensures all fused particles on the bed surface experience the same time/temperature profile as each other irrespective of where they are on the part bed surface.
“Also, our Big Wave powder handling system maintains a thermally stable mound of powder when distributing powder across the bed. These innovations are at the heart of our drive for consistency.”