Desktop Metal has announced its rebranding of Envisiontec as Etec a year-on from its acquisition of the resin-based polymer 3D printing company.

Envisiontec 3D printers were best known for their levels of detail and surface finish, and built a reputation in the dental, medical and jewellery industries since 2002.The length of its existence also goes some way to explain its intellectual property portfolio, counting more than 130 patents and pending patent applications. 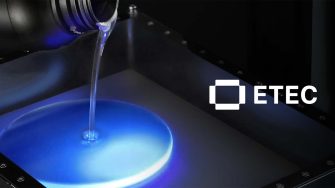 Since Desktop Metal acquired Envisiontec in 2021, the company has launched its dental and medical offshoot Desktop Health, where it believes Etec will continue to bloom with its 3D printing solutions by targeting volume manufacturing.

By strategically integrating 3D printing technologies, materials, software, and applications, Desktop Metal says it is looking to propel growing numbers of manufacturers into additive manufacturing so they can benefit from increased design flexibility, reduced waste, improved time to market, and greater financial savings while de-risking their supply chains.

The announcement also stated that Etec has partnered with Adaptive3D, another subsidiary of Desktop Metal, to offer its 3D printed photo elastomers exclusively on Etec additive manufacturing systems. This, Etec explains, will allow it to optimise performance through integration between hardware and materials, and opens up the 3D printing technology to a wider range of industries, including consumer products and mechanical use cases.

“Our launch of Etec and Desktop Health allows us to speak more directly to specific customers with focused needs and serve them better. Etec offers incredibly powerful 3D printers paired with exclusive materials that are already driving a new wave of consumer and industrial innovation.”

The new brand’s logo is said to represent an overhead representation of a DLP 3D printer’s build tray, in which the resin is transformed by a digital light projector into a physical object.