Intel has announced its 13th Gen Intel Core processor family, led by the Intel Core i9-13900K, which features 24 cores and a max turbo frequency of 5.8 GHz. The new ‘Raptor Lake’ processors will be available in desktop workstations later this year and will go head-to-head with the new AMD Ryzen 7000 Series, competing on a range of workflows from CAD to rendering and reality modelling.

The big difference with 13th Gen Intel Core is that it has more E-cores than its predecessor. The flagship Intel Core i9-13900K, for example, has 16 E-Cores, double that of the Core i9-12900K. This should deliver a big performance lift in multi-threaded workflows such as rendering. Intel says it can be as much as 41% faster.

Of course, the P-cores have also been enhanced and while their number remains the same (a total of eight in the Core i9-13900K), Intel says users can expect up to 15% better single-threaded performance compared to the previous generation. 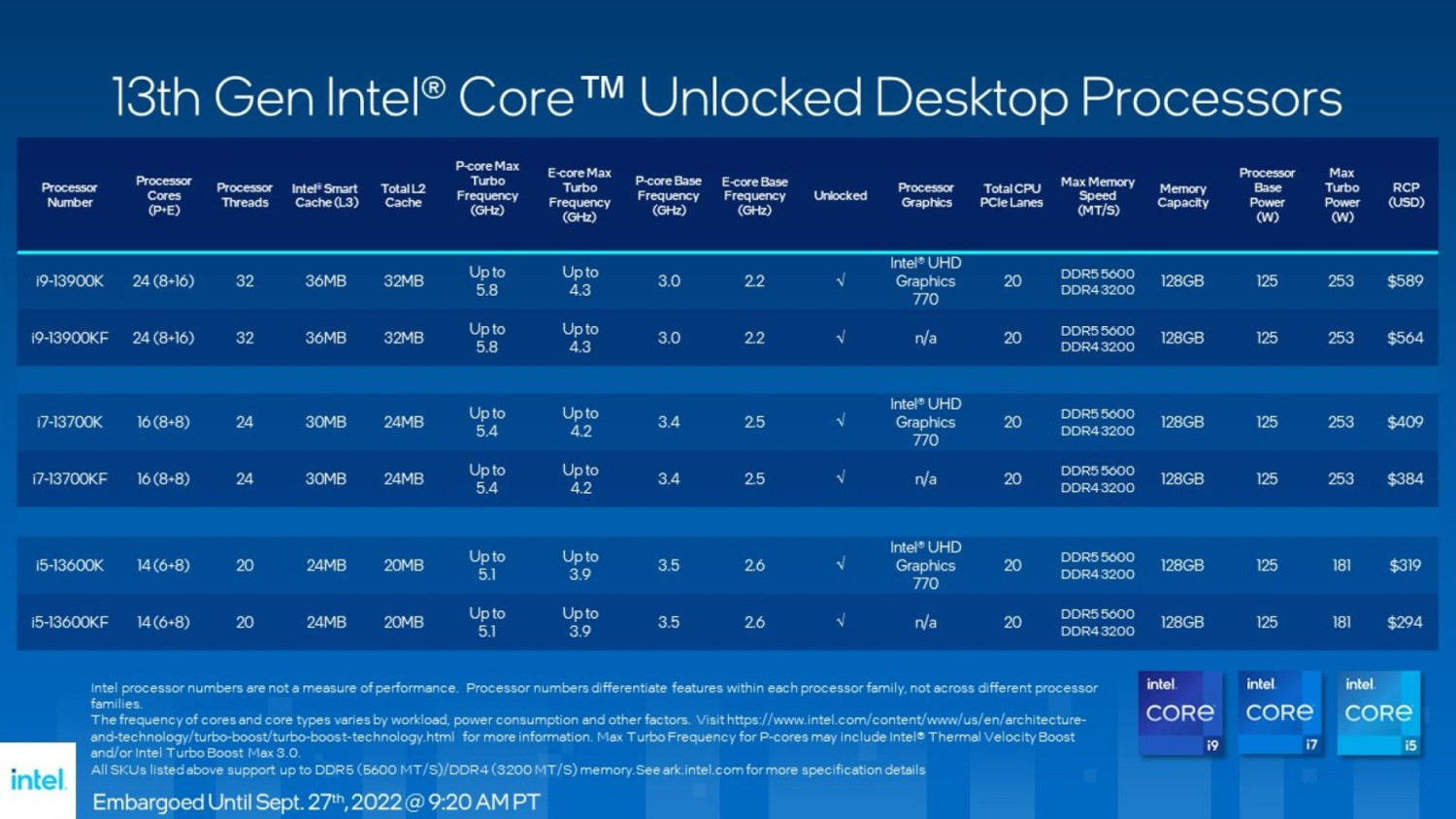 Other features include increased memory support to DDR5-5600 and DDR5-5200 (while maintaining DDR4 compatibility), PCIe Gen 5.0 support, with up to 16 lanes off the processor, and up to 2x the L2 cache and increased L3 cache.

While the spotlight is on the flagship Core i9-13900K, Intel has launched a total of six 13th Gen Intel Core processors – three with integrated graphics and three without. Details can be seen in the table above. The Core i7-13700K and Core i5-13600K could be of more interest to price conscious architects and engineers with predominantly single threaded workflows, such as CAD.

This is an incredibly exciting time for mainstream computer processors, with Intel and AMD both launching new architectures within weeks of each other. In recent years, AMD has certainly had a significant advantage for ray-trace rendering, but we now expect Intel to compete much more strongly in multi-threaded workflows, as it did already in single threaded workflows like CAD.

Of course, when it comes to workstations, customers don’t always get a choice, with many large firms being tied to procuring IT only from major manufacturers.

While we expect both 13th Gen Intel Core and AMD Ryzen 7000 Series workstations to be widely available from custom system builders like Scan, BOXX, Armari and Workstation Specialists, we still expect Intel to dominate among the tier ones.

To date, Lenovo is the only one out of HP, Dell and Fujitsu to offer an AMD Ryzen processor in a mainstream workstation – and that is with the Ryzen Pro 5000 in the ThinkStation P358. Whether Ryzen 7000 (and the Ryzen Pro 7000 that will presumably follow) becomes the catalyst for others to follow suit remains to be seen.

Finally, as a follow up to this 2021 article, we’ll be putting 13th Gen Intel Core up against the AMD Ryzen 7000 Series soon, testing with a range of real world AEC applications, including CAD, rendering, reality modelling and more.