Celsius J5010 – If you’re after a quiet, well-built and compact workstation that also packs a punch then the Fujitsu Celsius J5010 ticks all the boxes, writes Greg Corke

The small form factor (SFF) workstation is no longer the entry-level machine it used to be. Like other workstations in its class, the Fujitsu Celsius J5010 packs a phenomenal amount of processing power into its 8.3 litre chassis.

With a choice of 10th generation Intel Core or Intel Xeon W-1200 processors (with up to 10 cores) and up to 128 GB RAM, it’s ideal for a range of 3D design-centric workflows – not just CAD or BIM, but entry-level simulation, point cloud processing, even ray trace rendering.

Graphics are more mainstream, but it still supports a wide range of CAD-focused GPUs, including the Nvidia Quadro P2200 (5GB), which is typically found in workstations much larger in size, but more on that later on.

Indeed, in CAD software Solidworks it took 77 secs to export our IGES model. This is only two seconds slower than the Scan 3XS GWP-ME Q120C  and its Intel Core-i9-10900K (10 cores, 5.0GHz overclock) which currently tops our charts.

Throughout the single threaded Solidworks test, the Xeon W-1270 maintained a steady 4.7GHz. This is a touch lower than the advertised Turbo of 5.0GHz, but nothing unusual, as theory and practice rarely align.

For design visualisation, the Celsius J5010 tells a slightly different story. It completed our multithreaded KeyShot rendering test in 346 secs, a little slower than we expected. Here, we observed all 8 cores running at 3.6GHz, only a touch above the base clock of 3.4GHz.

In a larger desktop workstation, where there’s more space and beefier fans, we would expect the same CPU to clock a little higher. In the Scan 3XS GWP-CAD Q116C, for example, the 8-core Intel Core i9-9900K ran at 4.2GHz completing our render test 53 secs faster. 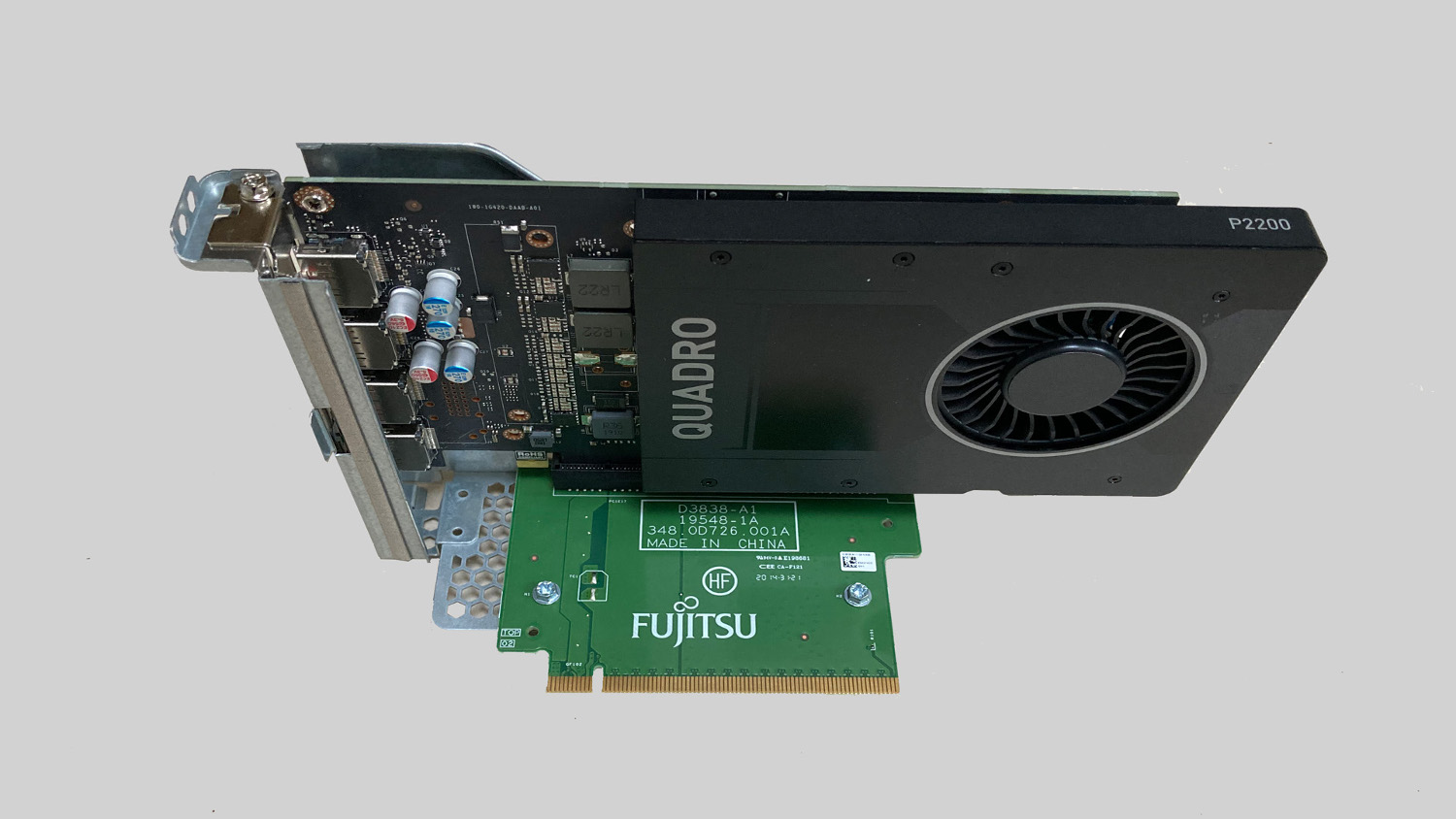 On paper, this machine looks a great fit for point cloud processing, another multi-threaded process. But you might need a few tweaks here and there to get the best performance. Leica Cyclone Register 360, popular in the AEC sector, really needs 64 GB+ of memory to get the best out of the software, so our test machine is a little light with its 32 GB. Simply doubling up RAM would considerably improve on the 4,511 secs it took to import and register our 90 GB point cloud dataset, as it would allow the software to use significantly more of the workstation’s 8 CPU cores (click here for more info).

Those dealing with large datasets might also consider increasing storage capacity. While the 512 GB M.2 NVMe SSD is fine for general workflows, it is also available in sizes up to 2 TB.

For even more capacity, there’s room for two 2.5-inch SATA HDDs, or one 3.5-inch SATA HDD up to 8 TB. The HDDs are held in a modular drive bay, which can be easily clipped out from the chassis after removing its cover, also revealing the M.2 SSD on the motherboard.

The chassis itself is very well built, incredibly solid and, at 8kg, surprisingly heavy for a machine of this size (314 x 296 x 89 mm). It can be positioned horizontally or vertically with detachable feet which give it stability. It’s also well equipped with ports, with 2 x USB 2.0, 2 x USB 3.2 Gen 2 and 1 x USB 3.2 Gen 2 Type-C on the front and plenty more on the rear, along with an RJ-45, Mouse / Keyboard (PS/2) and a 25 pin parallel port, something we’ve not seen in eons. There’s also an optional M.2 Wi-Fi module.

Considering its size, the Celsius J5010 does an incredible job of cooling.

Throughout all of our tests, it was virtually silent, testament to the smart engineering inside. In fact, fan noise only became noticeable when rendering on both the CPU and GPU, something that most users are unlikely to do with this machine. 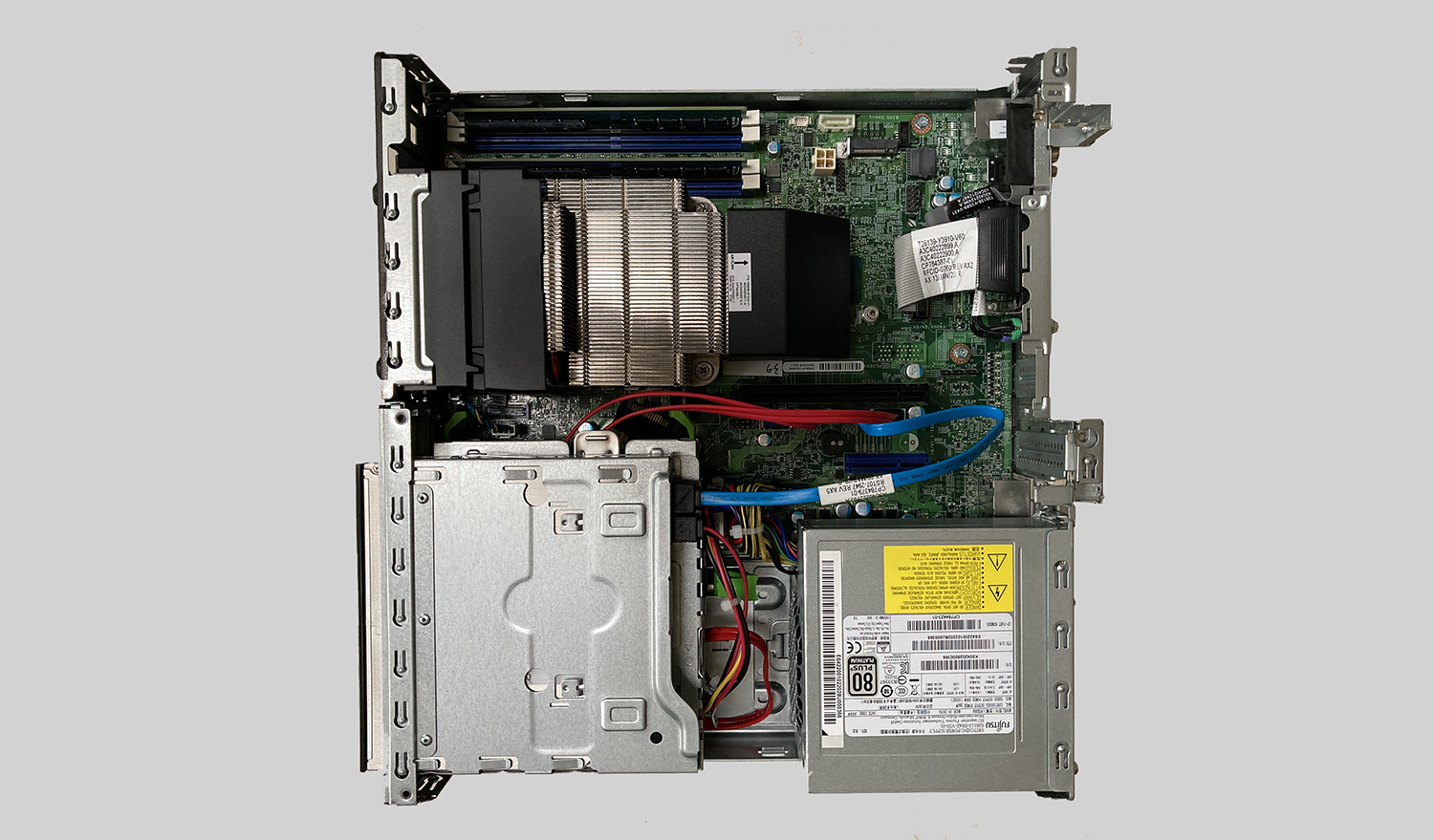 For many years Fujitsu has uniquely supported a full height graphics card in its SFF workstations. This is done by way of a riser card that makes the GPU sit parallel, rather than perpendicular, to the motherboard. It means the Celsius J5010 can be configured with the Nvidia Quadro P2200, rather than being limited to the low profile Quadro P1000.

In the past, this has given Fujitsu a notable advantage over the competition, but now with Dell and HP offering custom versions of the mobile Quadro RTX 3000 in their new SFF workstations, this is no longer the case. We haven’t tested the Quadro RTX 3000 but, on paper, it should offer a small improvement over the Quadro P2200, plus dedicated RT and Tensor cores for ray trace rendering, and entry-level VR support.

Of course, not everyone needs, or wants to pay, for such levels of graphics performance and the Quadro P2200 is still a great choice for CAD and BIM-centric workflows. When working at FHD resolution you can even get decent performance in demanding real-time viz tools like Enscape, where we recorded 24 Frames per Second when navigating a sizeable museum model.

If you’re on the lookout for a quiet, well-built, compact workstation that packs a punch in both single threaded and multi-threaded workflows, then the Fujitsu Celsius 5010 ticks all the boxes.

While the specs in our review machine are well suited to CAD (with the option of even moving down to a 6-core Intel Xeon W-1250) the chassis gives plenty of scope to ramp up the specs in all areas. Adding more memory, CPU cores and storage would make the machine much better suited to simulation, CAM, point cloud processing and CPU ray tracing. You simply won’t get the same flexibility in an Ultra Small Form Factor (USFF) workstation like the HP Z2 Mini G5 or Dell Precision 3240.

The one area that the Celsius J5010 can’t get a boost is the GPU. And while the Quadro P2200 will serve most workflows well, those that need more oomph may be better served by the HP Z2 SFF or Dell Precision 3440, which both carry the Quadro RTX 3000.