We find out what Intel’s new mainstream 10-core CPU brings to the table in the Scan 3XS GWP-ME Q120C, its 5.0GHz overclocked workstation

With delays to its 10nm manufacturing process, Intel has been working hard over the last few years to get even more out of 14nm.

In single threaded applications, percentage performance increases, generation on generation, have been relatively small — single digit. So, in order to add value, Intel has been steadily increasing the number of cores. This is great for multithreaded applications like ray trace rendering, but less so for CAD.

For years, Intel’s top-end mainstream desktop CPUs had 4-cores as standard, but in 2017 Intel started to ramp things up with the 6-core Intel Core i7-8700K. For each subsequent generation, it added 2-cores and this has now led us to the 10-core Intel Core i9-10900K, which launched in May 2020.

To find out what this new mainstream CPU brings to the table, we tested it out in the new Scan 3XS GWP-ME Q120C workstation, which was also fitted with an Nvidia Quadro RTX 4000 GPU and 64GB of DDR4 memory, a spec well suited to the CAD user who also does a little bit of CPU rendering, real time viz or VR.

Intel CPUs have long been rated by base frequency and Turbo Boost. When first introduced, it was all quite clear — base being the standard operating frequency which is guaranteed, and Turbo Boost being a dynamically enhanced frequency, which the CPU can potentially reach.

In recent years, however, things have become more complicated, and the Core i9-10900K actually comes with three different boost modes. And, to be honest, it’s all a bit confusing.

There’s one for all cores (Turbo Boost 2.0), one for two cores (Turbo Boost Max 3.0) and one that only works when the CPU temperature is below 70oC (Thermal Velocity Boost). Anandtech does a great job of explaining the differences.

To some extent, this is all a bit irrelevant for this review, as Scan has overclocked the CPU so all 10-cores run at 5.0GHz.

However, to give users of single threaded CAD and BIM software a potential boost, there’s also the option to swap to a standard profile, which can be easily enabled in the BIOS. This leaves the CPU at stock settings and allows it to turbo on one core up to 5.3GHz.

Well… that’s the theory at least.

In our single threaded Solidworks CAD test, we only saw the CPU go marginally above 5.0GHz, and only from time to time. It didn’t get near the single core Thermal Velocity Boost peak of 5.3GHz.

Swapping to stock settings had no impact on the time it took to export our Solidworks IGES model, which was 75 secs on both profiles – exactly the same time it took the 9900K.

More importantly, with the standard profile, when rendering in Luxion KeyShot, the all core frequency went down to 4.4GHz.

However, when the 10900K was overclocked with all cores running at 5.0GHz, it brought the time down to 204 secs, which is quite a substantial saving.

Armed with this information, we saw little to persuade us to run this machine at standard clock speeds, although in fairness we did our testing on the hottest day of the year (33oC). It could make a difference in a cooler environment.

We also tested in point cloud processing software Leica Cyclone Register 360 and the 10900K had a small but significant 10 per cent lead over the 9900K, despite the software not using CPU cores as efficiently as a ray trace renderer. More on this here. 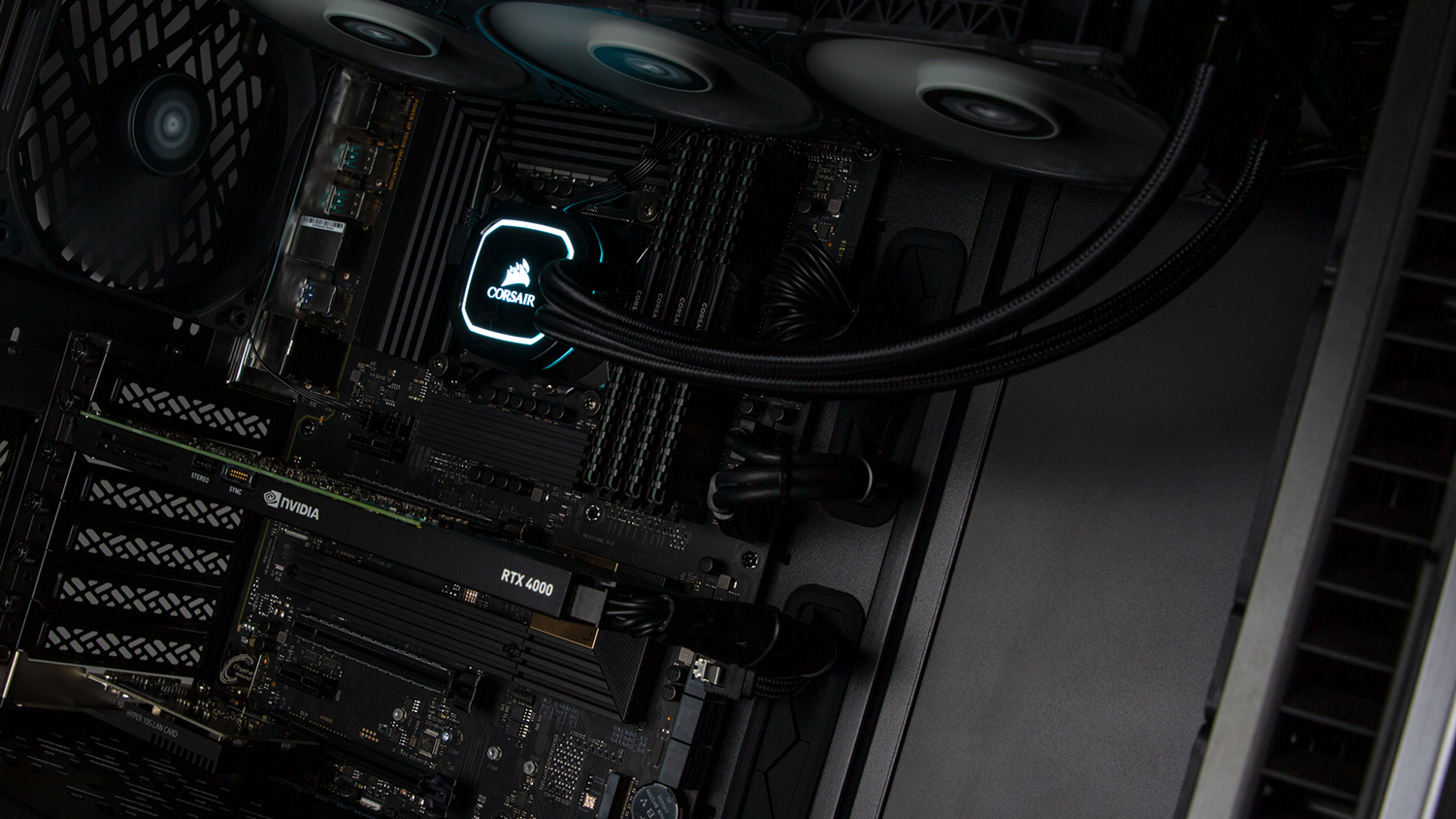 For CAD, the Nvidia Quadro RTX 4000 in the Scan 3XS GWP-ME Q120C is probably overkill, but for a machine that is also well suited to viz, it’s a good solid choice. The single slot GPU also works well with VR, so long as your models aren’t too large.

64GB of DDR4 memory is plenty for most CAD-centric viz workflows and it’s spread across four DIMMs. For larger datasets it can go up to 128GB with 32GB DIMMs.

Storage is a solid combination of 1TB Samsung 970 Evo Plus M.2 SSD, accompanied by a 2TB Seagate Barracuda HDD for data. Additional storage can be added, including a second M.2 SSD or SATA HDD.

The Fractal Design Define R7 case is a notable step up from the Corsair Carbide 275Q that we often see in Scan’s Intel Core workstations.

It’s more solid and well built and benefits from two additional USB Type A and a USB Type C port on the top.

There are a couple of downsides, however. It’s larger, presumably chosen so Scan can accommodate the substantial Corsair H150i 360mm hydrocooler that keeps the machine running very quiet, even during the balmy London climate. It’s also a bit tricky to get to the HDD should it need to be replaced.

In a world where component manufacturers are seemingly obsessed with bright lights, it’s refreshing to see a motherboard that’s beautifully understated. Matte black with a touch of bronze, the Asus ProArt Z490 Creator 10G not only looks good, but it’s part of the reason that Scan can do a stable 5.0GHz overclock.

It also has a trick up its sleeve, in that it comes with a 10 Gigabit LAN card, rather than the standard 1 Gigabit LAN which will be useful for shifting large design viz or point cloud datasets quickly across the network.

For CAD, it’s arguably the fastest money can buy, but you’ll only really see an improvement if your current machine is a few years old.

The biggest benefit will come from the additional cores and anyone with a 4-core CPU, standard in CAD workstations until a few years ago, will experience a massive reduction in render times.

But Intel is no longer the only CPU manufacturer in town. Those who take design viz seriously, will likely get more out of the similarly priced AMD Ryzen 9 3900X, which has 12 cores, even though performance in CAD will take a small hit.

Intel has had its work cut out over the last few years, trying to squeeze more and more out of its 14nm manufacturing process.

Up until the early 2000s Intel was shrinking the transistors in its CPUs every couple of years, but with delays to its 10nm manufacturing process it’s now been stuck on 14nm since 2015.

But why is this important? Having small transistors isn’t everything, but it can have a big impact on performance.

Smaller transistors need less power, so they can do more calculations without getting too hot and you can pack more onto a piece of silicon.