Loqski, a new convenient security lock for skis, was struggling to keep up with demand until a reassessment of its design for manufacture saw it carve new paths in the ski industry. We find out how swapping tooled prototypes for 3D printed composites made for cool results 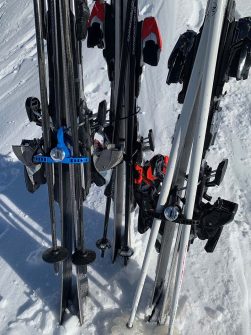 The après ski activities can be as much of a draw to a skiing holiday as carving through fresh powder in the alpine air, but it poses the problem of what to do with all your expensive skis and poles.

Skis are typically left outside with everyone else’s on a rack, but it was for this reason that avid skier James Pittard decided not to buy himself more expensive equipment for fear that it would go missing, either by accident or theft.

This led him to think about an easy to use, pocketable device that could lock both skis and poles together. Pittard took his idea to market with the help of a design agency, launching the Loqski ski lock. Built from a zinc-based alloy, the strap features a combination lock that can be operated even while wearing ski gloves.

However, as the company’s sales were taking-off, the zinc-based model couldn’t be manufactured fast enough to keep pace with demand.

Pittard looked for an alternative took the problem to WMG (Warwick Manufacturing Group) at the University of Warwick for assistance in testing suitable materials and redesigning the lock to increase performance and reduce manufacturing costs.

It was decided that Grivory GV-5H would be a suitable material. A tough option, favoured by outdoors equipment manufacturers, it is capable of weathering freezing temperatures while the variety of colour options offered more appeal to users. Yet, to create a prototype would require tooling that proved too expensive. Instead, the team at WMG 3D printed the prototype parts using its Markforged Mark 2, which allowed them to produce a carbon fibre infill part, that would reflect the strength of the Grivory.

WMG also assessed whether a redesigned barrel design component would fit into the assembly as changing this single part would help reduce overall manufacturing and assembly costs. Several 3D prints of the barrel component were produced to test for form and function, and that it would work alongside the existing assembly.

Pittard estimates that testing the new barrel design fitment in this way saved Loqski around £7,000 for the component to use it in the existing assembly, and the more than £50,000 it would’ve cost to create tooling for an entire new design.

WMG innovation manager Neil Jeffree says that Loqski is now in a position where it can better streamline its manufacturing. “With less components to assemble, the assembly time has sped up and so manufacturing costs have been reduced,” he says.

“Loqski always had an ambition of keeping manufacture in the UK and by reducing manufacturing costs, we are pleased that we could assist them in doing that. We are thrilled to see them take their new and improved lock to the market, and hope that skiers this season will invest to keep their skis safe.”

By reducing manufacturing costs Loqski is now able to produce a more cost-effective end product in higher volumes, which not only allows for better sales distribution, but has opened the company up to new markets.

“One of the things we’d now like to push is getting the new product into the ski rental market, where it can be hired out when skiers rent their skis,” says Pittard. “This is something we would never have considered with the zinc-based product as it was just too expensive.”

Dell wipes the slate clean with brand new design for its Xeon E5-2600 Precision workstations
Best bars of 2011
Huawei and Altair join forces for High-Performance Computing and Cloud Simulation
Siemens sets up own manufacturing and supply platform for additive manufacturing
Come fly with me
A fishing net hauls in the James Dyson Award 2012
Are you sitting comfortably?
Kenesto introduces alternative to general purpose cloud storage for engineers and designers
Previous Post
Next Post