Innodesign founder Kim Young-se has revealed how the company as been testing out colour 3D Printed prototyping for its array of consumer electronics. 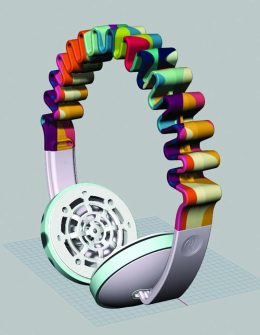 The man behind the 2018 Winter Olympics torch, and numerous designs for numerous brand including Samsung, Microsoft, LG, and Hyundai Motors, has trialled the Stratasys J Series 3D printers for advancing current project prototypes.

The brand’s Innowave headphones that, as the name suggests, feature a complex wave pattern were able to be transformed quickly by the use of different colour palettes and graphics to test out further iterations.

The Innodesign founder expressed how impressed he is with the results from the Stratasys J Series 3D printer, which has allowed them to cut production times, save money and produce photorealistic prototypes.

Young-se said that before 3D printing creating a concept model could cost the company $900 to $1,300 and producing a high-fidelity functional prototype used to cost $2,700 to $4,500 while with Stratasys J Series, he said, they can create a functional prototype with photorealistic patterns for as little as $100.

Innodesign also claimed Stratasys J Series saves them great amounts of time. They said that they can now create a prototype in around 8 hours whereas before they used to take up to two weeks.

Young-se, who wasn’t new to 3D printing, also praised the wide range of materials, the 360,000 colour options and the automatic colour mapping function that allows designers to create photorealistic prototypes.

The Korean designer said he was satisfied with the result: “It was unexpectedly successful, and everybody was happy about the fine details and the original colour the 3D the printer was able to reproduce,” he said.

Innodesign went as far as stating the Stratasys J Series 3d Printer is the first 3D Printer that answers all their needs in texture and colour mapping. They also claimed they yet haven’t found any drawbacks with it.

“Our Stratasys 3D printer truly amazes everyone on the team and boosts the energy for designers to keep thinking out of the box for more and better ideas. We look forward to opening up a whole new world full of colourful and new designs together with Stratasys,” concluded Young-se, suggesting a potential collaboration the 3D printer manufacturer.