There’s a lot of talk about lattices and topology optimisation, but few have a clear view of why, when and how to use each approach. Toby Wilkinson of Added Scientific explains how to consider them for your own project

Topology optimisation and lattice integration are two methods that are becoming increasingly popular in additive manufacturing (AM), in order to improve the performance of components across many sectors. This can be in terms of component weight, mechanical, thermal, and even electromagnetic performance – but when and why should you use each technique?

Topology optimisation is a process that aims to provide the optimal distribution of material in a given volume, minimising a chosen objective (such as the compliance of the structure), subject to constraints.

This process relies on a simulation of the loading conditions to determine where material should be distributed. As such, the accuracy of this simulation is key for a useful result. The optimisation algorithm cannot consider factors external to the simulation, such as unexpected loads or environmental conditions, which means the result is highly specialised to the numerical model used.

For many engineers, the prospect of using mathematics and numerical theory to automate component design is appealing, but in using this approach, the invaluable experience and intuition of the designer is lost.

As the geometry outputted is only optimised for the particular use case that is loaded into the model, when these loading conditions change, the solution can no longer be considered optimal and a replacement solution must be calculated. For this reason, topology optimisation should simply be considered as another tool in the design workflow, and not a quick route to a perfect design.

This being said, the benefits of using this technology in design remain numerous; for example, many finite element analysis (FEA) solvers not only model structural mechanics, but can also extend to thermal and electromagnetic studies. All of these can be used by a multi-objective topology optimisation algorithm to create optimised component designs that are specific to the defined loading.

With many CAD software vendors including some support for topology optimisation in their workflows today, this technology is clearly maturing and there are many examples of real structures such as light-weighting of support structures for space applications, brake callipers for automotive and even prosthetic limbs that have been designed using this methodology.

An alternative approach to performance enhancement using topology optimisation is to integrate lattices into component designs.

In AM, lattices are traditionally thought of as scaffold structures that are made using individual struts, but can also be generated using bespoke unit cells and surfaces. These structures are regularly seen in AM applications across a range of industries, being used as infill patterns to remove unneeded material, heat exchange surfaces with increased surface area and even as purely aesthetic features.

Driven by consumer demand, many software tools have emerged for lattice design and, as a result, lattices have been successfully integrated into real-world components to enable lightweighting and heat management of drive train components in automotive and bespoke tailoring of stiffness for conformal wearables.

Conformal wearables use a designer’s ability to tailor the unit cell of an integrated lattice to create ‘meta-materials’ with highly customisable behaviour. For example, certain lattices possess a negative Poisson’s Ratio, meaning they contract laterally when loaded; these structure are termed ‘auxetic’ and have high shock absorption properties.

3D-printed meta-materials like this have been used to fabricate bespoke shoe soles and bicycle saddles with a specific pattern driven by pressure data. Unlike topology optimisation, these lattice structures are not usually designed for a specific purpose.

Instead, their complex structures are found to be robust under unpredictable loading and therefore appropriate for challenging applications such aerospace, where turbulence and vibration are random.

To add an extra degree of complexity, research is ongoing to combine the two approaches, using topology optimisation to functionally grade lattice structures, varying the density according to structural requirements

So which method should you use for your application? If you want a component for a very specific use case with well-defined loads, topology optimisation will give you the best result.

Lattices, however, are not so simple to use. They can be used as a homogenised material to bring bespoke mechanical properties and to reduce weight, to control fluid flow and specific filtration, as excellent heat exchange surfaces, and any combination of these. There is even ongoing research into how lattices may be used in electromagnetic applications.

To add an extra degree of complexity, research is ongoing to combine the two approaches, using topology optimisation to functionally grade lattice structures, varying the density according to structural requirements.

The human femur bone demonstrates a fantastic example of nature expertly combining both approaches. The shape of the harder, outer shell of cortical bone has been optimised, based on the structural loading from the person, to withstand the forces of walking and running.

The internal trabecular bone lattice is aligned with the direction of stress, to provide structural rigidity, while allowing blood flow, reduced weight and improved robustness of the bone.

In summary, I believe both methods have a key role to play in enhanced engineering and design. While topology optimisation is best used for macro-scale design changes, lattices can be integrated for their meso-scale material properties. Thanks to AM, engineers have the freedom to use either or both techniques to create high-performance components, far beyond those which can be manufactured conventionally.

Lattices: Common forms and their use cases 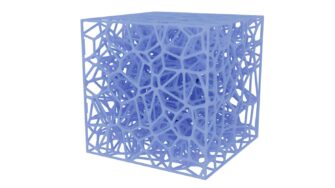 The Voronoi lattice pattern is found frequently in natural structures. It is controlled by the underlying point set and, by having more points in a certain region, the lattice can be locally denser. This technique can be useful for applications such as footwear, where measured foot pressure data can control the density of the points to increase lattice strength, where needed. 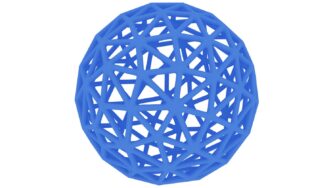 The Delaunay lattice utilises Delaunay Triangulation to efficiently connect a set of points in space. Again, by controlling the density of the point set, the density of the lattice can be varied. It’s used as a method of lightweighting an object using strong tetrahedral cells. Unlike structured unit cells, it is simple to conform to any arbitrary shape. This also the starting point for the Voronoi lattice. 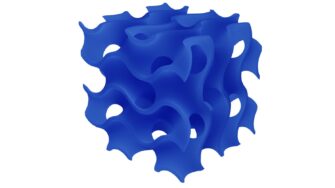 Surface-based lattices are commonly used in additive manufacturing for the principal reason that they are mostly self-supporting. In the case of the Gyroid lattice, the complex surface separates two independent regions that can be utilised in heat exchangers, for example, where they might be used to channel two different fluids that never meet and mix together.

The Hilbert space-filling curve is a fantastic example of using a coded approach to fill a 3D space but emphasises the need to include an engineer’s intuition in the design process. This type of structure is notoriously difficult to manufacture! As a structural component, it performs poorly but the algorithm could be used to generate paths for fluid pipes in a heat exchanger.