Cambridge-based BiologIC Technologies is attempting to transform synthetic biology – the field of science that involves redesigning organisms for useful purposes by engineering them to have new abilities.

Its team is currently developing a digital bio-processing unit designed to speed-up laboratory processes, which it hopes will provide greater benefits from the latest breakthroughs in food, fuels and medicines.

The team’s end-goal is to condense that whole process and create a digital ‘lab in a box’ that significantly simplifies existing processes.

As way of analogy, BiologIC suggest that this is similar to the way in which large mainframe computers eventually gave way to smaller, more efficient desktop PCs.

BiologIC Co-founder Nick Rollings says that the company’s ‘lab in a box’ draws inspiration from the history of the semi-conductor.

“Importantly, our instrument could be used to create biology by design and on-demand, whether it’s to treat patients on-site or make the latest biofuels,” he says.

“We believe this device will enable the next industrial revolution.” 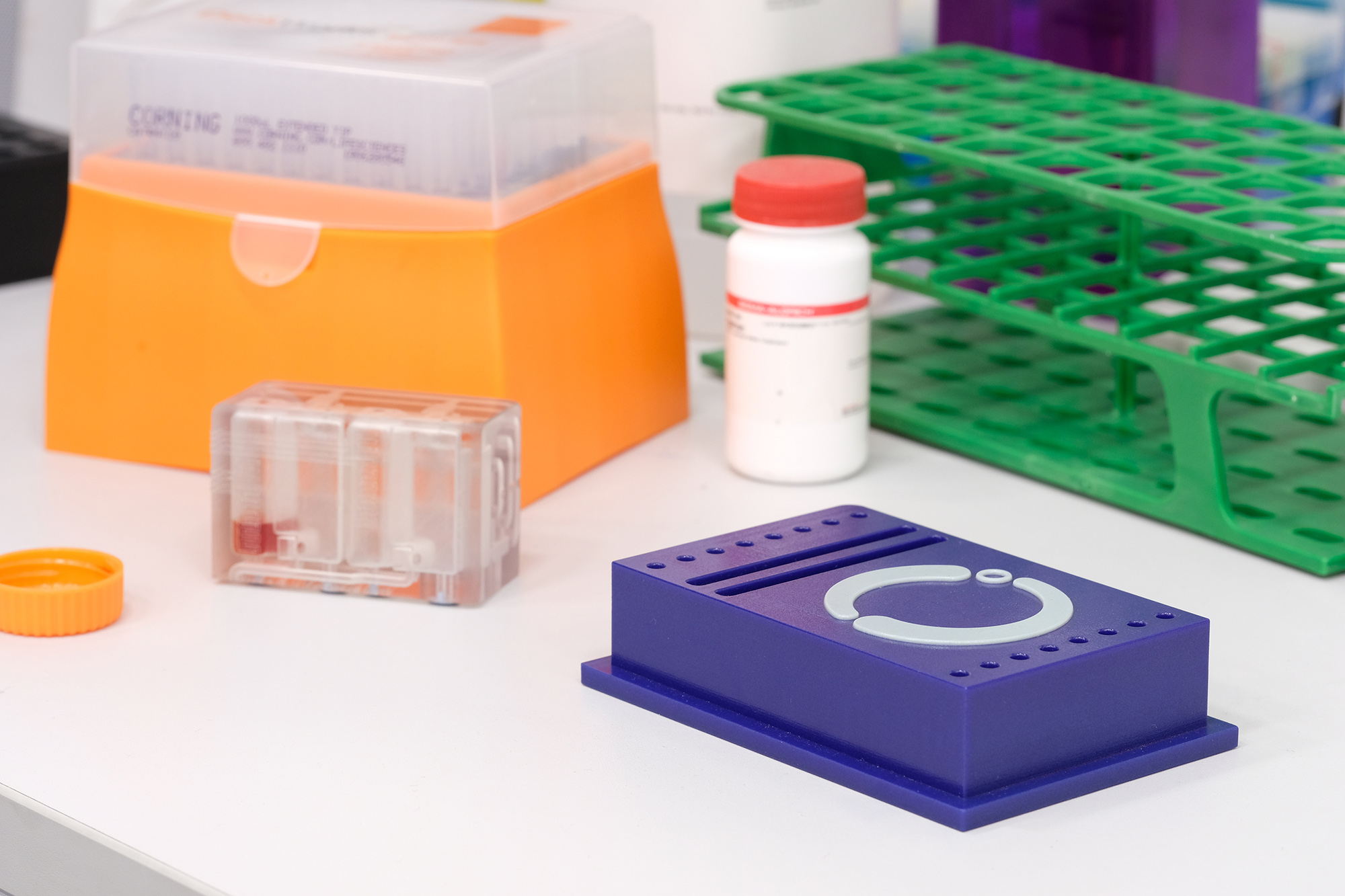 The cost and time implications of creating such a device and bringing it to reality with a working prototype proved the key stumbling block.

BiologIC’s tactic was like many start-ups to design initial units for manufacture using 3D printing, enlisting Stratasys’ Polyjet technology to achieve greater results due to its ability to print in multi-materials.

The beating heart of BiologIC’s proposition is a 3D printed ‘bio-processing unit’, which automates a number of complex biological processes using many different elements and materials. This, explains Rollings, would simply be impossible to create using any traditional manufacturing methods.

The design of its current unit, around the size of a Rubik’s Cube, currently combines four materials, but the team hopes to utilise the full eight-material potential of its newly purchased Stratasys J826 in the future.

“Indeed, having this capability is what allowed us to even achieve the complexity of the current design,” says Rollings.

The ability to print in the Vero Ultra Clear material, for example, with its transparency, is essential for visualisation of the cartridge’s inner workings so that scientists can check the biology is of high quality and performing as designed.

Within the structure, the precision movement of fluids is key to controlling the biology, and the ability to print in flexible photopolymers like Agilus30 and other digital materials has allowed the company to add a level of functionality within its bio-processing unit that would have been impossible without this material.

Once finalised, BiologIC plan to also manufacture the device – potentially in their thousands – using additive manufacturing.

According to co-founder Richard Vellacott, 3D printing has enabled the team to turn the traditional life-sciences business model on its head.

“With our in-house J826, we can build and test cartridges constantly, and show potential customers and investors our rapid development process in real time. This is something unachievable with other traditional life science R&D processes.

“This flexibility has led directly to our early adopter program with other high-science and biology companies, resulting in faster innovation and greater success overall,” Vellacott explains.

“With the huge increase in our ability to read and write DNA over the past 10 years, the next decade will see us unlock the potential to apply and scale this knowledge.

“This new era of biology by design will create significant disruptive value across many industries and will help solve some of the biggest issues of today, including climate change, environmental sustainability and better health through new foods, fuels and precision medicines,” concludes Vellacott.