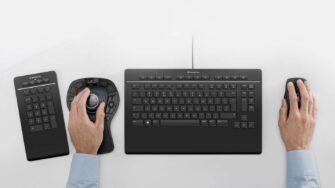 3Dconnexion has announced its Keyboard Pro with Numpad to help designers and engineers work more comfortably at their desk environment with CAD applications, design programs and 3D environments.

The detached numpad, and ability to relocate it, reduces the width of the full-size keyboard, allowing for a better position of a mouse or pen and a resulting better posture – especially given the heavy mouse use of CAD professionals.

3Dconnexion explains that working with conventional keyboards with an integrated numpad leads to an awkward shoulder rotation, as the width requires placing the mouse too far to the right. Reduced shoulder rotation associated with the use of a narrow keyboard – such as one with no numpad – results in less muscle fatigue.

The new design and ability to further customise layouts will also come as a great relief to left-handed keyboard users, who can also adapt their workflow with 3Dconnexion’s left-handed CadMouse.

The new keyboard is also equipped with 12 programmable ‘3Dconnexion keys’ that automatically recognise active apps and provide access to app-specific commands, helping save time and keep the user focused.

Desktop applications like MS Office and web browsers are also supported, with an on-screen display keeping the user informed of which commands are assigned.

“After revolutionizing the 3D navigation experience by introducing the SpaceMouse, we wanted to innovate the way users interact with commands within CAD environments, design programs as well as daily applications,” explained 3Dconnexion CEO Antonio Pascucci.

“We designed 3Dconnexion Keyboard Pro and Numpad Pro to enable users to personalize their desktops, improve their posture and achieve a seamless workflow. This naturally leads to better performance.”

Both keyboard and the programmable wireless numpad have ergonomically shaped concave keycaps that fit the fingertips with their matte-coated surfaces and rounded edges.

Advanced scissor technology should mean the keys offer stability and minimal resistance, while a  full-sized palm rest and slim design allows a flat position on the desk for relaxed and easy typing.

Encrypted wireless connectivity between keyboard and numpad along with up to five additional wireless 3Dconnexion devices, such as 3Dconnexion’s SpaceMouse and CadMouse, for an uncluttered desk and a secure connection.