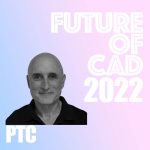 Time stands still for no-one – including design software, so we asked Jay Tedeschi, Product Management Principal, Onshape, for their opinions on the direction of CAD, ranging from initial concepting workflows, the impact of Artificial Intelligence (AI), and even how we keep it up to date

Q
How do you imagine sketch tool environments evolving?

Over the years there have been so many ideas which were going to supposedly revolutionize that aspect of design. But here we are, 2022, and the most straightforward way to conceptualize a design idea is still via a series of sketches.

Increased implementation of AI/ML in all areas of Onshape, including the sketcher result in a tools which are more responsive as they are able to accurately predict user workflows, and present a more streamlined set of options to help the user complete their tasks with less wasted time.

While the use of VR is gaining traction, and has proven to be a valuable tool, its contribution lies more in the areas of work/assembly instructions, IoT, onsite markup/review, etc. As a full SaaS product running in a browser, Onshape’s Follow Mode which allows users to follow each other visually while enabled, is literally the embodiment of browser based collaboration.

Onshape also has mobile specific apps which leverage the strengths of both Android and iOS, including support for a variety of input devices which are native to those platforms.

Q
How do you imagine designers will interact with CAD UIs in the future?

Onshape users already have access to this type of interaction via Onshape’s Android and iOS platform specific applications. And because Onshape is a true SaaS product, there are no concessions which must be made with regards to data access in these mobile versions of the application. We are also able to fully utilize the native gesture and/or stylus driven interfaces of those platforms.

Q
Downloading regular updates to a 3D CAD package is more common – is this the way all 3D CAD is now heading?

We can’t really foresee whether other CAD system vendors going forward will be forced to adopt Onshape’s Zero IT Footprint architecture, and we cannot speak to or whether they will stick with their more traditional release structure.

To some degree, as this question alludes, almost all vendors now supply their users with hotfixes/updates between major releases. What we can say is that Onshape’s full SaaS implementation means that Onshape users do not have to deal with product downloads, installations, updates, etc. Because Onshape is cloud native, as opposed to cloud accessible, it can be accessed instantly via any modern web browser from Mac, PC, Chromebook or Linux computers, as well as Android and iOS mobile devices. This architecture means that administrators can also instantly provision and deprovision seats to scale their design team and meet fluctuating business needs.

Q
How do you view the increase in AI impacting design tools the most?

We feel that one of the strongest uses of AI is in areas of the product which are typically not considered when discussing AI/ML as a design tool aid. As a full SaaS/Cloud native product, Onshape can compile data about not only how the product is being used, but also how effectively it is running on a specific network, on a specific server, at certain times, with certain traffic, for example.

All of that information can then be analysed and development decisions made in response to the data. This promises to have a much larger impact overall on user productivity, than just the current implementations where AI/ML is used to optimize UI’s, streamline workflows and evaluate designs.

Q
How do you imagine the users of your software will change and how do you see this impacting the software?

One way to encourage design teams to work together is to provide tools that make it easy to do so. If the barriers to finding information, sharing data and collaborating on the same projects are removed, then product development becomes more natural.

With cloud-native applications such as Onshape, collaboration no longer has to feel forced and teams start to work together naturally, because the product supports and therefore encourages it.

For a generation of users, who are well versed with the collaborative nature of applications which offer this capability, Onshape is one more tool which leverages this familiar paradigm. The fact that it is a design and engineering tool becomes secondary to how they interact with it, and with others using it.

For users who have spent a career using more traditional file based systems, the transition to these tools is more of a philosophical change than anything else. This subset of users quickly see the advantages of working with these new tools once overcoming their initial resistance to adopting this new way of interacting with both design data and design team members.

Q
When will CAD software be able to take advantage of modern graphics APIs for better 3D performance and advanced features like GPU ray tracing?

Onshape is WebGL based, and as such is already delivering tightly bound, low level application graphics much in the same was as OpenGL or DirectX, and as such is able to offer good performance regardless of device specific CPU/GPU’s. That being said, certain aspects of the product, such as Render Studio, which have more demanding graphics requirements, are built to exploit cloud based GPU arrays and therefore liberate the user from having to purchase expensive local GPU hardware.