The Scan 3XS GWP-ME N1-32T, with its new Nvidia RTX A6000 GPU and AMD Ryzen Threadripper CPU, is beast of a workstation with the power to deliver in a whole range of design viz workflows, writes Greg Corke

In the world of design viz, there’s a long-running debate about CPU/ GPU rendering and where to best allocate your workstation budget.

Do you place an emphasis on GPU, with one or more high-end graphics cards for rendering, coupled with a high GHz, low core count CPU, or go large with a 64-core CPU and spend what’s left on a half-decent GPU for real-time 3D?

The reality is, for those who take design viz seriously, and rely on multiple applications, it’s never really that black and white.

Unreal Engine, for example, thrives on a multi-core CPU for many workflows, including recompiling shaders and building lighting.

In V-Ray, you can choose to render on GPU or CPU, depending on what you want to achieve.

The good news is that with Scan’s latest workstation, the Scan 3XS GWP-ME N1-32T, users don’t have to make that decision. Equipped with an AMD Ryzen Threadripper CPU and the brand-new high-end Nvidia RTX A6000 GPU, there’s buckets of processing power for all different types of workflows.

In workstation reviews like this, the CPU normally gets top billing — after all it’s the heart of the machine — but when you have a component as impressive as Nvidia’s new high-end workstation GPU, the Nvidia RTX A6000, it’s impossible not to break protocol.

The Nvidia RTX A6000 is Nvidia’s first professional desktop GPU based on its ‘Ampere’ architecture. It’s a Quadro in everything but name, with all the features you’d expect from a pro-class GPU, such as support for ECC memory, stereo, Frame Lock for viz clusters and GPU virtualisation.

The most notable feature, however, is that is comes with 48 GB of on-board GDDR6 memory. This is colossal amount for any GPU, and plenty for handling complex scenes in GPU renderers, both in terms of high-poly models and highres textures.

On test, the Nvidia RTX A6000 didn’t disappoint. In GPU renderers V-Ray GPU and KeyShot 10, we saw double (in some cases more than double) the render performance of the previous generation ‘Turing’ Nvidia Quadro RTX 6000 (24GB).

In real-time 3D applications, including Enscape and Autodesk VRED Professional, the leap wasn’t as big, but we still saw a performance increase of between 1.40 and 1.50.

At just under £1,500 (Ex VAT) for the CPU, the 32-core AMD Ryzen Threadripper 3970X gives you a huge amount of multithreaded processing power for your money.

In KeyShot, for example, it completed our 4K test scene in an impressive 66 secs, second only to the Armari Magnetar X64T-G3 FWL (38 secs) and Lenovo ThinkStation P620 (47 secs), both of which had 64-core Threadripper/ Threadripper Pro CPUs.

In the V-Ray 5.0 benchmark, it delivered a score of 34,902 vsamples. As this benchmark is new, we have very little historical data at DEVELOP3D, but you can see comparative scores here.

Changing tack to point cloud processing, the Scan 3XS GWP-ME N1-32T set a new record in our Leica Cyclone Register 360 benchmark, registering our 100 GB dataset in an incredible 2,119 secs. As this application is only lightly threaded, the workstation’s fast memory (128 GB of DDR4 3600MHz) and fast storage (PCIe 4.0 NVMe) will also have played a very important role.

The beauty of Threadripper is you also get good single-threaded performance, which is essential for CAD and BIM workflows. Amazingly, it completed our Solidworks IGES export test in 81 secs, just 6 secs slower than the current record holder, an Intel Core-i9-10900K (10 core) clocked to 5.0 GHz.

The substantial 280W CPU is cooled by an all-in-one Hydro CPU cooler, the Cooler Master MasterLiquid ML360 TR4 Edition. It features a plate/pump that bolts directly onto the processor, with tubes leading to a substantial three-fan radiator attached to the roof of the case.

For a CPU of this power, it’s relatively quiet in operation, but fan noise is noticeable. The pitch of the fans also goes up and down, depending on what’s being processed, although this was mostly apparent when processing point clouds in Cyclone Register 360, where the CPU load comes in waves.

Acoustics aside, it does an excellent job keeping the CPU running at top speeds. It maintained an impressive 4.0 GHz when rendering in KeyShot for over an hour, 0.3 GHz above its base clock of 3.70 GHz.

In CAD software Solidworks, it hovered around 4.30 GHz under single-threaded loads; and in Leica Cyclone, which is lightly multithreaded, 4.15 GHz.

For storage, Scan has done something we don’t see very often — an M.2 NVMe SSD for the main system drive and a 2.5-inch SATA SSD for data.

The 2TB WD Black SN850 M.2 SSD is based on the new PCIe Gen 4.0 standard, which is fully supported on the Threadripper platform, courtesy of the Asus RoG STRIX TRX40-E motherboard.

It means you get vastly superior sequential read/write performance (up to 5,839 MB/s read and 4,827 MB/s write, according to the AS SSD benchmark).

This may go some way to explaining the leading scores in our Leica Cyclone point cloud processing test which reads and writes hundreds of gigabytes of data.

With 4TB on the Samsung 860 Evo SATA SSD, there’s plenty of capacity as well, but the machine can also be kitted out two more M.2 NVMe SSDs and multiple SATA Hard Disk Drives (HDDs) if required. 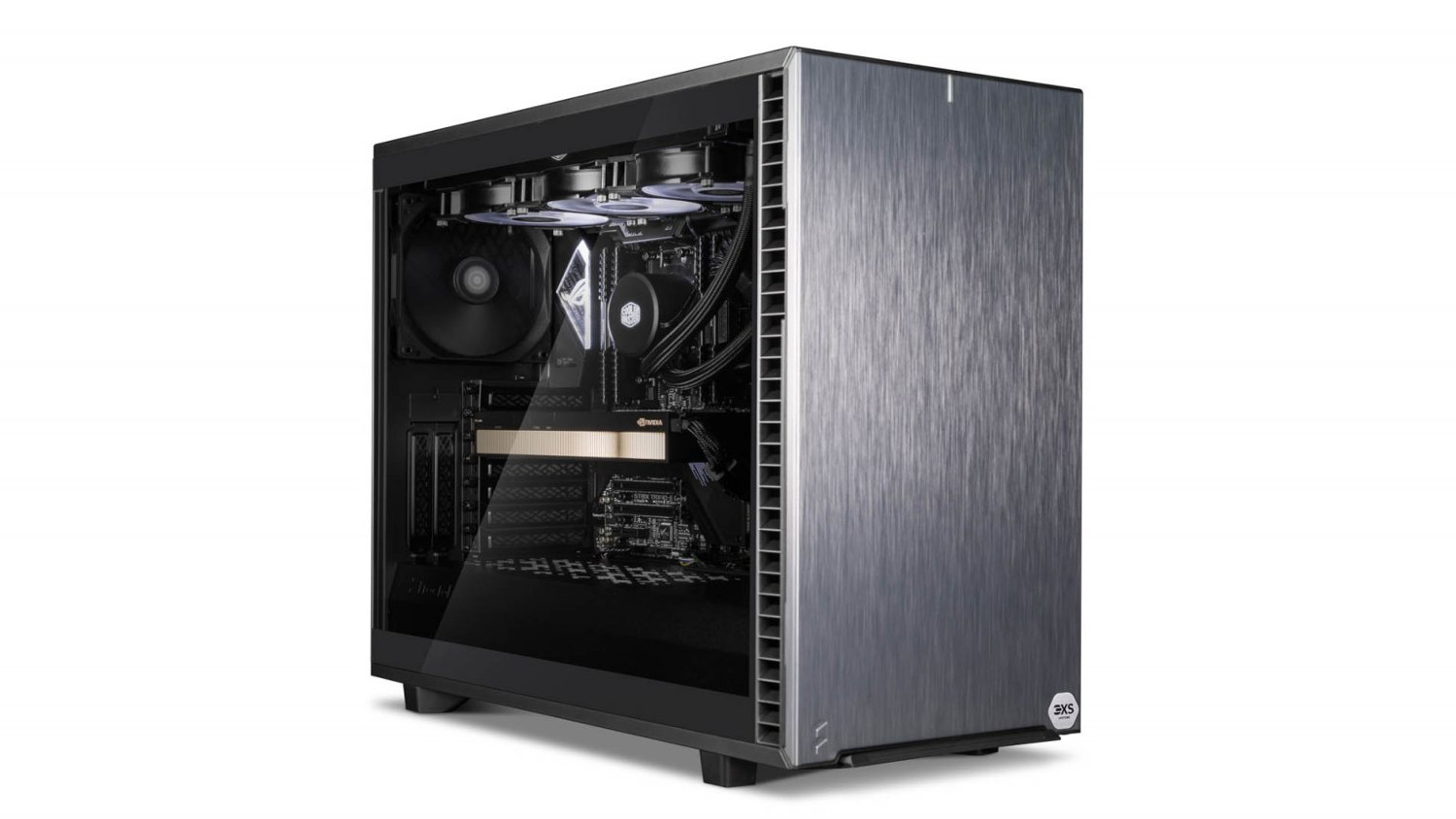 For a machine of this class, it’s not surprising that Scan has gone for a substantial chassis. The Fractal Design Define 7 measures 547 x 240 x 475 mm and weighs 13.45 kg (before you add any components).

Our review machine came with a tempered glass window side panel, so you can gaze admiringly at the components inside – if that’s your thing.

Joking aside, Scan has done a nice job of the interior, setting the RGB lighting system to all-white. And when you have a GPU as beautiful as the Nvidia RTX A6000, then why not show it off to your colleagues? If you don’t want to brag, then a solid side panel is also an option.

The system is powered by a 1,000W version of the Corsair RMi power supply, which is 80PLUS Gold rated. However, even though the motherboard can take a second Nvidia RTX A6000, if you do want to double up with NVlink and get a GPU memory pool of 96 GB, you may need a more powerful PSU.

With a 32-core Threadripper CPU, and the most powerful workstation GPU money can buy, the Scan 3XS GWP-ME N1-32T is a powerhouse for multi-application design viz workflows – CPU-centric or GPUcentric, it really doesn’t matter.

And with 128 GB of superfast DDR4 memory (with capacity for 256 GB) there plenty of scope for multitasking, allowing you to chop and change between applications with ease.

As with most Scan workstations, this one is very well-built and generally quiet in operation. However, in workflows where CPU load varies, some may find the fan noise distracting.

Of course, at £7,500 (Ex VAT) the Scan 3XS GWP-ME N1-32T doesn’t come cheap. On the other hand, if you’re on the look-out for machine capable of making light work of any CPU- or GPU-centric design viz workflow you throw at it, then you can be sure this would be money well spent.