With these brand new desktop workstations, Scan has most bases covered from CAD to rendering and beyond

Scan is always one of the first out of the blocks with new technologies. And with the 3XS GWP-ME A132C and 3XS GWP-ME A132R it has delivered two powerful desktop workstations with the very latest processors from Intel and AMD.

The ‘C’ and ‘R’ suffixes refer to ‘Core’ and ‘Ryzen’, specifically the brand-new 13th Gen Intel Core and AMD Ryzen 7000 Series processors. As you will see from our in-depth review these powerful new chips are extremely well suited to a range of  workflows, from CAD to reality modelling and rendering. Both of our test machines look identical and include several common components, but they differ in three main areas – CPU, motherboard, and GPU. So how do they fare in the typical workflows of architects and engineers? 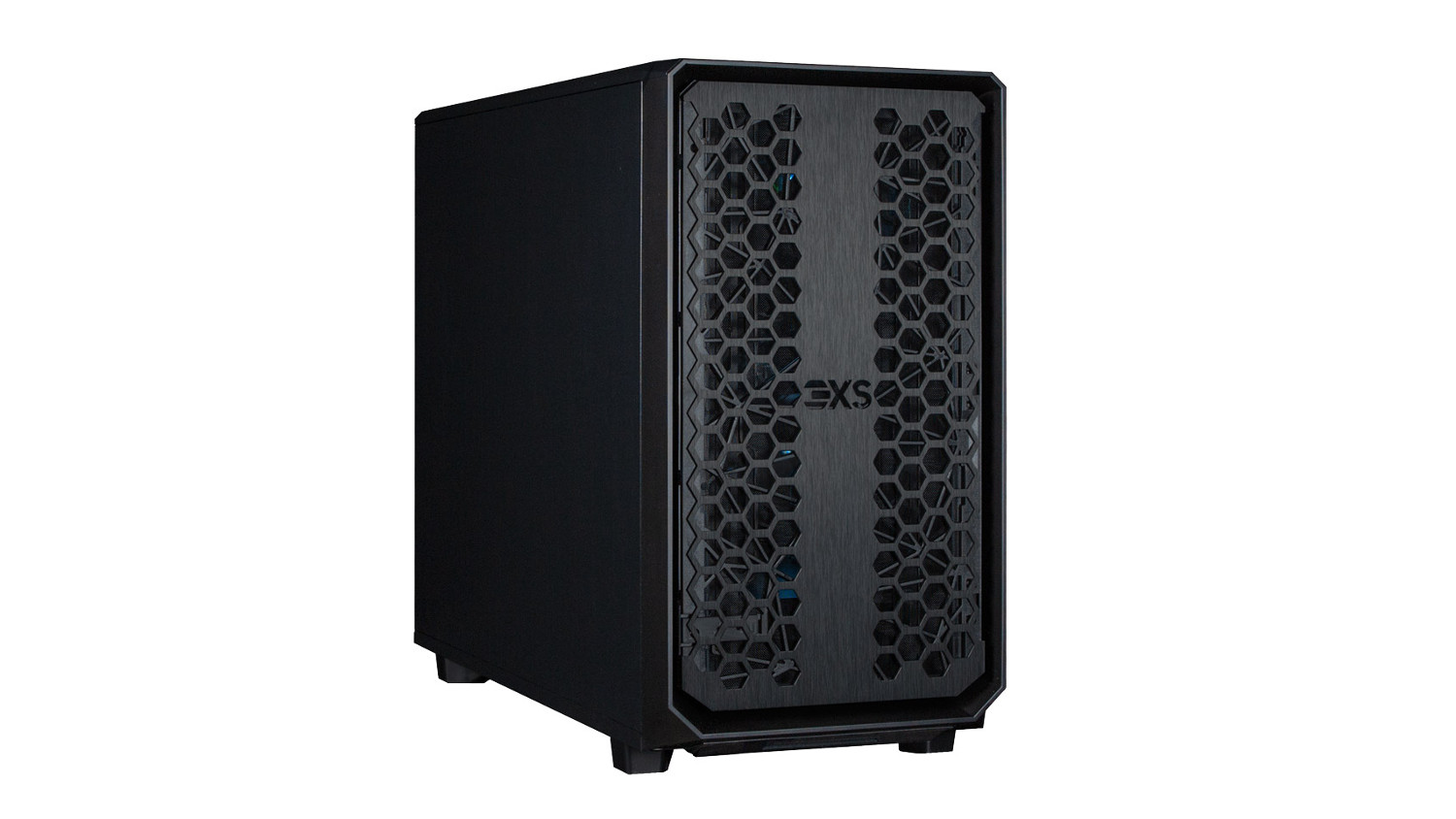 Our Scan 3XS GWP-ME A132C test unit arrived with a top-end Intel Core i9- 13900K CPU, paired with Nvidia’s entry level pro ray tracing and AI-accelerated GPU, the RTX A2000. This combination of processors is well suited to CAD and entry-level visualisation, as well as more CPU-intensive workflows such as point cloud registration, photogrammetry, and simulation. Together with 64 GB of Corsair Vengeance DDR5 5,600MHz memory, a 2TB Samsung 980 Pro SSD and an Asus Z790-P WiFi motherboard, the unit will set you back £2,583 + VAT.

Access is easy. Simply lift off the top panel and pull off the side to get to the parts inside. With the SSD mounted directly on the motherboard, a compact GPU, no hard disk drive (HDD), and all the cabling tucked neatly away, everything feels a little lost inside the spacious interior. But modern-day workstations are as much about keeping components cool as they are about expansion, and with the power-hungry Intel Core i9- 13900K CPU, Scan certainly has its work cut out here.

When rendering in KeyShot we recorded over 450W of power draw at the plug, pushing 530W in Solidworks Visualize, which can use both CPU and GPU. The Corsair H100i Pro XT liquid CPU cooler is well regarded as a thermal solution, but fan noise in this system is very noticeable under these heavy loads.

The processor’s 16 E-cores come into play when rendering, and while performance in KeyShot and V-Ray is impressive, it doesn’t hit the heights of the AMD-based 3XS GWP-ME A132R, propelled by its 16-core Ryzen 9 7950X CPU. Performance in Cinebench is much closer.

The processor is helped along by its 64 GB of DDR5 memory, which takes up two of the four slots on the Asus Z790-P WiFi motherboard. It is supported by a single 2TB Samsung 980 Pro M.2 NVMe PCIe 4.0 SSD. Additional storage can be easily added, including two M.2 SSDs, SATA SSDs and SATA HDDs. It comes with 2.5Gb Ethernet plus Wi-Fi 6E.

For graphics, the Nvidia RTX A2000 (12GB) provides a very solid foundation for CAD and BIM and an entry-point for visualisation. In CPUlimited applications, Revit and Inventor, 3D performance is on par with the much more powerful Nvidia RTX A4500, but it falls behind in Solidworks with the SPECapc benchmark. While numbers on charts are useful, does this really matter in the real world? Solidworks assemblies don’t come much larger than the 8,000 part Maunakea Spectroscopic Explorer telescope model. And, at 4K resolution, the RTX A2000 delivered a smooth 33.3 FPS in shaded with edges mode, and 27.7 FPS with RealView enabled, for perfectly good model navigation.

With 12 GB of memory, the RTX A2000 is well equipped to handle some fairly sizeable datasets for GPU rendering and real-time viz. But it has its limitations in real-time workflows. While it can comfortably handle complex models at FHD resolution, 4K is a bit of a stretch.

With our 9.5 GB Enscape office model, it dropped from 39 FPS @ FHD to 17 FPS @ 4K. And the slowdown is more dramatic as demands on the GPU grow – going from 43.3 FPS to 12.6 FPS with the Audi car configurator in Unreal Engine, and from 38.2 FPS to 16.2 FPS in our Autodesk VRED Professional car model with medium anti-aliasing. 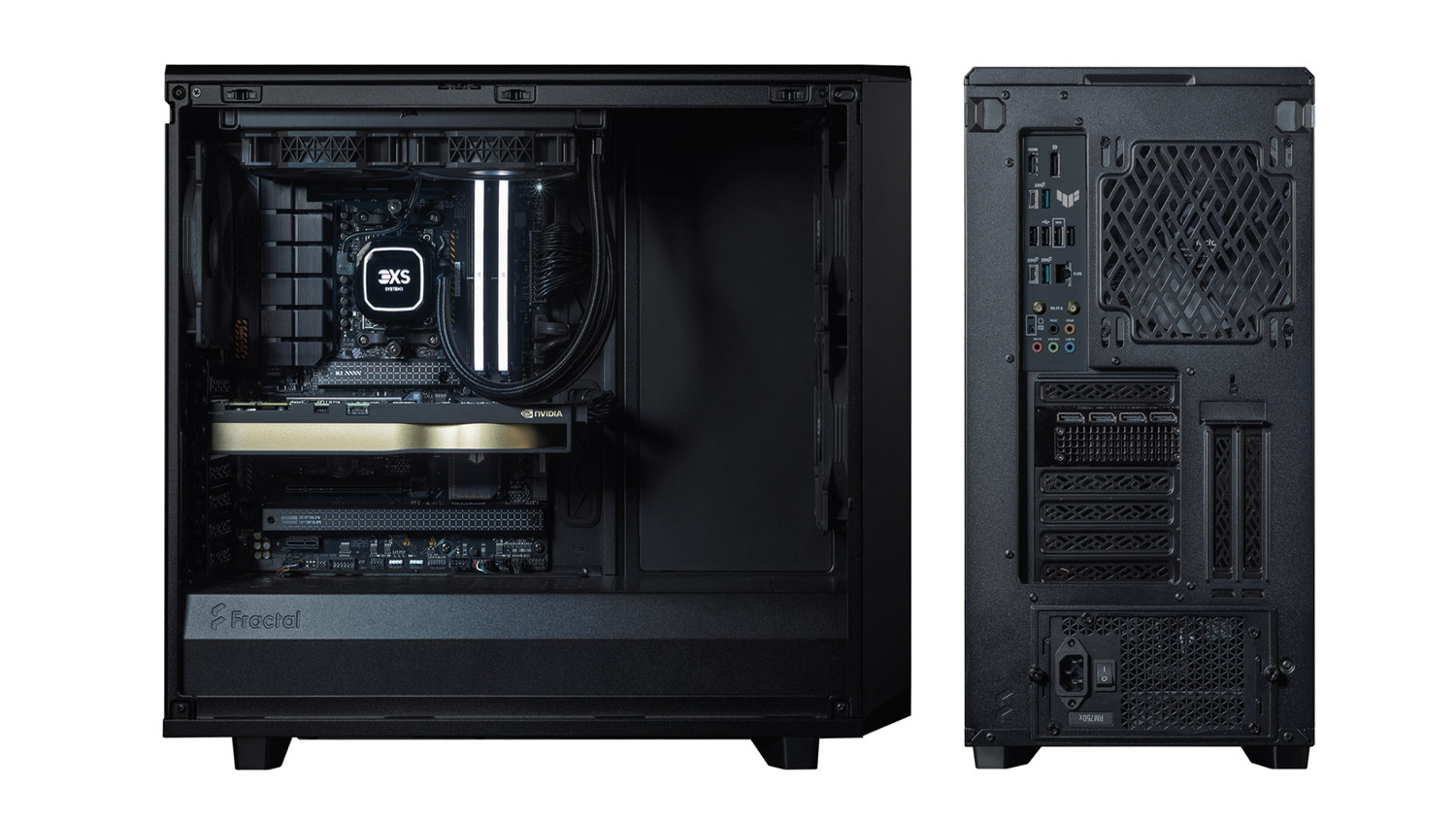 With the top-of-the-range AMD Ryzen 9 7950X CPU and powerful Nvidia RTX A4500 GPU, our test machine is tuned for all types of demanding visualisation workflows. But this balance does come at a premium. At £3,583 Ex VAT, it’s precisely £1,000 more than the Intel machine.

The 16-core processor makes light work of ray trace rendering, second only to the 32- core and 64-core AMD Threadripper Pro. When rendering in V-Ray and KeyShot, it demonstrates a 10% performance lead over its Intel-based sibling.

But with the powerful Nvidia RTX A4500 GPU with 20 GB of GDDR6 memory, users have choice. Both KeyShot and V-Ray, plus many other rendering tools, can take advantage of the dedicated ray-tracing and AI hardware within the dual slot card. And with careful juggling of CPU and GPU resources, this can help bring new efficiencies to day-to-day workflows.

For real time visualisation, expect a silky-smooth viewport at 4K resolution in all but the most demanding of workflows. It’s only when enabling real time ray tracing in Unreal Engine that frame rates drop below the golden 30 FPS, but 17.37 FPS is still acceptable.

Of course, a GPU this powerful is overkill for CAD and BIM. And with Revit and Inventor in particular, users will do just as well with an Nvidia RTX A2000, if not an Nvidia T1000. In fact, because these applications are so CPU limited, the Intel machine with its RTX A2000 actually wins out in viewport performance, as it does in core application workflows from model creation to data translation.

The workstation shares many of the same components as its Intel counterpart – 2 TB Samsung 980 Pro SSD and 64 GB Corsair Vengeance DDR5 memory. The Asus TUF B650- Plus WiFi motherboard is also comparable, offering a similar array of ports, 2.5Gb Ethernet and Wi-Fi 6E. One notable benefit of the AMD Socket AM5 motherboard is support for PCIe 5.0 M.2 SSDs, so there’s an upgrade path to faster storage when these next generation drives become widely available.

Finally, the AMD system wins hands down when it comes to acoustics. Even when the CPU and GPU are being pushed to their limits in Solidworks Visualise it doesn’t become noisy — just a gentle hum from the fans. Despite the combined load at the plug going over 500W, the power is much more balanced across CPU and GPU and their independent coolers.

Both Scan workstations are great machines, extremely well built with a 3-year warranty (1st year onsite) as standard. The big question on everyone’s lips is which one is best? That very much depends on what you do, day in day out.

If your workflows centre on CAD or BIM, with a little bit of visualisation, then the 3XS GWP-ME A132C is a great choice. It has single-threaded performance in abundance, it’s no slouch in multi-threaded workflows either, and the GPU is a great entry point to real-time viz. However, fan noise really kicks in when it hits top gear. This is certainly not a quiet machine.

Meanwhile, the 3XS GWPME A132R delivers in all areas of visualisation, with the bestin-class CPU for rendering, a powerful pro GPU and good acoustics. But having this level of all-round performance does come at a premium, with our test machine costing a full £1,000 more than the Intel.

Of course, both machines are fully customisable, so you can pick and choose components to match your specific workflows. And there’s plenty of room to grow with an additional 64 GB of memory and buckets of storage.