Both AMD Radeon Pro W6000 series GPUs will also be certified for a wide range of professional applications, including all the major CAD and BIM tools.

The new GPUs feature enhanced Compute Units (CU) with dedicated ‘Ray Accelerators’. According to AMD, this enables the Radeon Pro W6800 to deliver up to 46 percent faster rendering in visualisation software Solidworks Visualize compared to the previous-generation Radeon Pro W5700.

Other visualisation software that can take advantage of the new Ray Accelerators include those that use DirectX Raytracing (DXR) such as Unreal Engine, those that support Vulkan Ray tracing, including those in development at Solidworks (Project Romulan), Autodesk (One Graphics System) and Enscape, and those that support AMD Radeon ProRender 2.0, which includes Acca Software, Autodesk Inventor, Rhino, Autodesk Maya, Blender and others.

The new GPUs will not accelerate ray tracing in Nvidia RTX-enabled applications such as Luxion KeyShot, Chaos Vray, Chaos Vantage and Enscape 3.0.

According to Siddharth Palaniappan, director of graphics and advanced visualising at Solidworks, “The Radeon Pro W6800 is the perfect card to exploit the performance of real-time ray-tracing in the viewport with hardware ray tracing built into the GPU and lots of available memory to load large datasets.”

Beyond hardware ray tracing, the new cards also support AMD Radeon Pro Viewport Boost, a new pro driver feature designed to reduce latency and boost viewport navigation performance. According to AMD, it can increase Frames Per Second (FPS) by as much as 214% in Autodesk Revit without impacting the visual experience. 3ds Max, Twinmotion and Unreal Engine also work with AMD Radeon Pro Viewport Boost, with support for other applications coming soon.

AMD was reluctant to go into too much detail about how AMD Radeon Pro Viewport Boost works, but did tell AEC Magazine that it focuses graphics horsepower around the areas of the UI that move (the model), as opposed those that don’t (e.g. the menus). Also, that the benefits are bigger with larger models.

AMD also highlights performance benefits for the new GPUs in DirectX 12-based applications like Lumion 11.0 and Agisoft Metashape, which performs photogrammetric processing of digital images to generate 3D reality models.

Other features of the Radeon Pro W6000 Series include AMD Infinity Cache, a ‘last-level’ data cache integrated on the GPU die designed to reduce latency and power consumption. “It acts as an amplifier to the bandwidth,” says Jamie Gwilliam, senior business development manager, AMD Radeon Pro graphics. “It allows us to push through more data and reduce many of the common bottlenecks out there.”

Architectural visualisation studio Beehive, for example, has been testing out the AMD Radeon Pro W6800 in real-time viz tool Lumion on ‘Aedas City’, a visualisation project that features six of the international architecture firm’s building designs, compiled into a vast fictional city.

In terms of specs, the AMD Radeon Pro W6800 is a full height, double slot PCIe 4.0 board. It has a peak power of 250W and needs a 6-pin and an 8-pin power connector. With 6 Mini DisplayPort connectors it can drive up to six displays at 5K resolution or up to two displays at 8K resolution. It has 128 MB of AMD Infinity cache.

AMD states peak FP32 Throughput (Single Precision) as 17.83 Teraflops of Compute Performance. It is not optimised for FP64 (Double Precision), so applications like engineering simulation will likely to continue to be best served by the AMD Radeon Pro VII ($1,899).

The AMD Radeon Pro W6800 is available now for $2,249, the same price as the Nvidia RTX A5000 with 24 GB GDDR6 memory, which our sister publication AEC Magazine reviews in-depth here.

Look out for a full review of the AMD Radeon Pro W6800 soon.

With 8 GB of GDDR6 memory, the AMD Radeon Pro W6600 is designed for more mainstream workflows. It is likely to appeal more to users of CAD and BIM software that want ISV certifications for CAD/BIM applications like Revit, Inventor and Solidworks, with enough power for entry-level hardware ray tracing or VR workflows.

In terms of specs, the AMD Radeon Pro W6600 is a full height, single slot PCIe 4.0 board. It has a peak power of 100W, so is suitable for entry-level tower workstations, and needs a 6-pin power connector. With four DisplayPort connectors it can drive up to four displays at 4K resolution or up to two displays at 8K resolution. It has 32 MB of AMD Infinity cache. 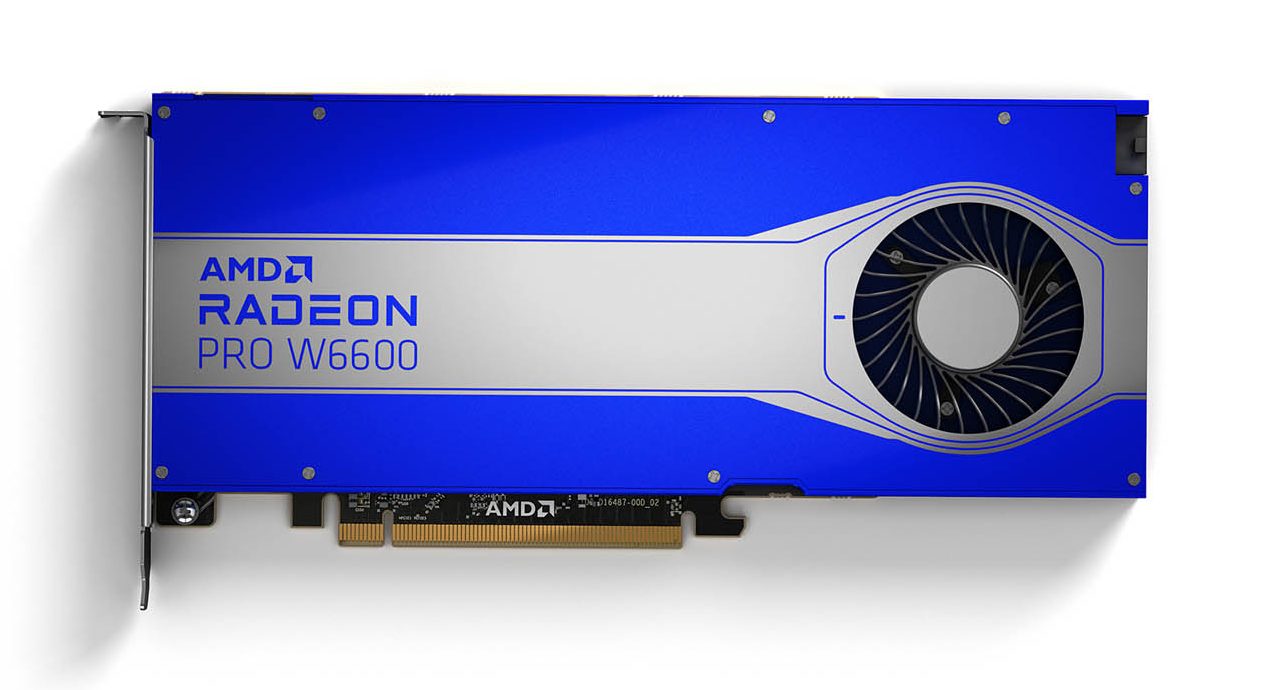 AMD has also introduced the W6600M, a mobile variant of the W6660 which AMD says offers ‘parity with the performance’ of the desktop GPU and offers the same core specifications. It will be available in the HP Fury ZBook G8 mobile workstation in July.