We speak to Evoko about the development of its eye-catching new digital message board, fully equipped to disseminate the accurate and up-to-date information that could help to take some of the stress out of the situation for workers

Among the many changes that Covid-19 has brought, the way we define the workplace may be one of the most profound. Some employees may never return to the ‘old world’ of 9-to-5 occupancy of rank-and-file desk spaces in large corporate buildings.

This isn’t entirely new, of course. The modern office was already evolving into a more loosely structured environment, way before the pandemic reared its head.

We’ve seen the development of hotdesking and the emergence of home-working colleagues who just pop in occasionally for meetings, as well as rooms dedicated to Zoom calls and video conferencing equipment.

For some companies, coworking spaces run by third-party providers have become a good way to access extra space in which to accommodate employees. But Covid-19 has certainly seen many of these trends accelerate.

Office workers now returning to the workplace – whether on a part-time or full-time basis – will likely do so with a new set of expectations. In order to address their requirements, technology investment will be a priority.

Evoko is a Swedish company that develops products to help modern meeting spaces become more efficient. Among them is a range of award-winning digital meeting room ‘managers’.

Positioned outside rooms, these digital screens enable workers to book the room, or to check a schedule to see if it’s already booked for a given time and date. Green or red lights, meanwhile, give an immediately understandable visual cue as to whether a room is currently occupied or not.

Evoko’s products have a strong visual identity and boast a clear and intuitive user interface. Software features like multi-site management and room analytics give an insight into wider utilisation trends. More basic tools link the screen to the calendars of workers and the Evoko app running on their mobile devices.

The company’s latest product, Pusco, is a digital message board that sees Evoko shift its products into more highly populated spaces, such as entrance lobbies and staff meet-up points.

Pusco’s upright, portrait screen can be fixed to a wall; more commonly, it’s positioned freestanding on its shapely wooden legs. Either way, the latest workplace updates are delivered with efficiency and style on its eyecatching display.

“We saw companies struggling with information and the spreading of information,” explains Evoko project manager Sofie Berglund, speaking over video conferencing from her office in Stockholm. “People want information – but they don’t want to have to go looking for that information!”

The backbone of the concept focused on making sure employees get information they need, on building company culture and creating a good impression for visitors – but ideas of how the product would look underwent an early change.

Originally, Pusco was envisaged as a more standard AV screen, but with product design taking place entirely inhouse for the first time in Evoko’s history, the team decided it needed a more distinctive character and style. That led directly to the adoption of key elements from classic Scandinavian furniture as a source of inspiration

“We gave the product a characteristic furniture-like pose by tilting it slightly backwards, just like the backrest of a chair,” says Berglund.

“We also added wooden legs to soften the entire expression of the product, and made it a bit more Scandinavian. We do love our wood! It was a material that we hadn’t used before, but we thought it was a good idea to implement it in the product. Indirectly, it felt more like a piece of the interior, rather than a ‘technical’ product.”

Using wood was a clear departure from the more conventional steel stands used for other digital message boards, while elements like the screen’s rounded edges can be found in other Evoko products, helping maintain brand familiarity while also helping the design to stand out from other devices on the market.

“We want that to be implemented in all other Evoko products. We want people to say ‘Okay, this is an Evoko product’, so that’s definitely something that we always went back to and had in mind,” says Berglund. 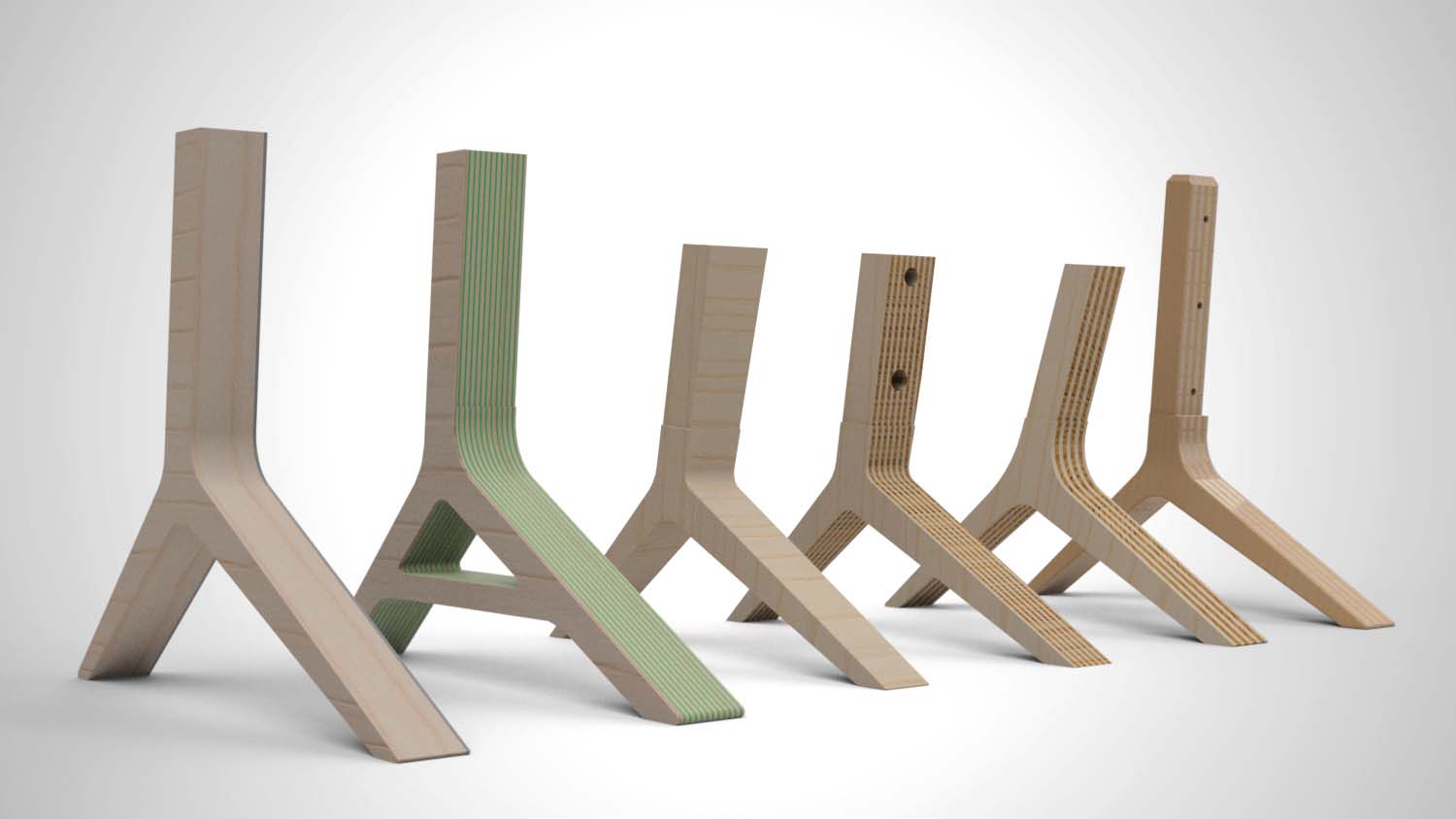 During the development of the Pusco, the concept ideation was conducted through sketches, moving quickly into 3D CAD designs using Solidworks, which allowed physical, 1:1-scale prototype models to be made.

The rapid transition from sketches to prototypes was helped by Evoko’s parent company, SMS Smart Media Solutions, one of Europe’s leading providers of brackets, fixtures and enclosures for screens and other media units. With access to the parent company’s factories, mock-ups could quickly be realised using end-use materials.

While concept renders were also made in Maxwell Studio, Berglund says it was important to have physical prototypes early on in the process, to help get a sense of the scale of the design in real life. “Especially with the Pusco, because it’s huge, and you don’t really see that on a [screen],” she adds.

Full-size physical prototypes at roughly the same weight as the end product were key for testing the stability of what is a tall, heavy product balancing on raised wooden feet.

“I’ve been lifting a lot of Puscos – they are heavy!” laughs Berglund, explaining that the Pusco’s kerb weight of nearly 80kg is similar to that of a fully grown human.

“I don’t know how many different legs we [tested], because we needed to find the right material for them to be able to hold the installation,” she says, referring to a collection of test legs now living on shelves inside the Evoko design studio. These clearly illustrate the iterative progression of the design.

“It’s been a great thing to learn. We’ve been in the office trying to push it as much as possible to see what it can do and what we can do,” she says. “So far, we really have found a good combination of stability and design, so now we can feel it’s a safe and beautiful product. That’s very important for us.”

Having physical models also helped in the testing process, allowing quick iterations and faster decisions to be made, not only for factors like stability, but also for negating heat build-up and positioning elements like light and sound interaction.

Here, the team was able to turn to a member of staff who is also a musician, to create options for different alerts, sounds and themes, with the team getting together to vote on their favourites.

As well as sound, a system of LED lights are built into the screen to replicate the branding of its surroundings. These lights slowly pulsate to draw attention to it and signal when new information is available.

All these factors combine to increase employee engagement, while also helping to enhance a company’s brand, by providing visitors and employees with a slick, professional and informative welcome.

Evoko – getting the message across

The biggest challenge involved in Pusco’s design was achieving a complete ‘plug and play’ system, where the user doesn’t have to worry about the complexity of the technology or the set-up process.

Berglund explains that aligning hardware and software development teams on achieving a ‘ready to launch’ product was tricky. “From a hardware development team’s view, everything must be done and work as expected directly from launch day – but for a software team, the term ‘ready’ is a bit more vague,” she says.

The software was developed externally. Initially, the idea was that an existing digital signage platform would be customised for the Pusco. However, in the middle of the project, the design team realised that this third-party software platform wasn’t as easy to use as initially expected.

Driven by wanting to make the product as simple and intuitive as possible, Evoko took a step back and created the entire design of the user interface itself. The design team generated a lot of the user experience (UX) elements and different design mock-ups in Adobe XD, Photoshop and Illustrator.

“Maybe it wasn’t the best project, or the most efficient, because we needed to take this big step back in the middle,” admits Berglund, “but in the end, we think that was the right decision.

We would try to do as much as possible in XD for example, to really get [the software designers] to understand what we wanted and what we needed, and for them then to produce it in coding.”

In the end, the software developers came up with clever solutions to achieve the user experience Evoko wanted.

Intelligent and adaptive templates on the software side take care of the design of notifications and manage how they are delivered on the screen.

Solidworks was used by the Evoko design team throughout the process, allowing its members to control the design, from the concept modelling stages right through to a final 3D model. This model was fully wired for the necessary electronics and production documentation for manufacture was produced.

According to the design team involved, a great deal was learned by carrying out all the design and engineering work in-house, when compared to previous projects where several different partners had input.

“When we [work] with different partners, sometimes it can be hard. A lot of our partners have information and knowledge, but we maybe don’t have the same amount of knowledge. So bringing products in-house lets us have much more control over the entire process and also the product,” says Berglund.

Before lockdown, Evoko had already found its niche in modern offices around the world, with products available in more than 80 countries. But now, they will take on a new significance, as accurate and up-to-date information plays its part in taking the stress out of returning to office life, even as the world continues to adapt and evolve in its response to the pandemic.