nTopology 3.0 has been released, introducing GPU acceleration for first time, promising real-time feedback and claimed performance increase between 10- to 100-times. 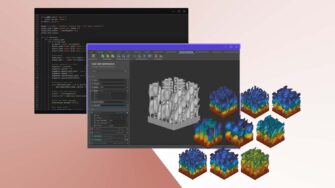 nTopology is, if you’re been following the company for a while, based on an implicit modelling engine.

The difference between that and the 3D CAD tool you’re more likely familiar with is that implicit modelling tools are defined as by a mathematical equation and the graphics on screen are implied by the underlying maths.

Your workhorse CAD system is, by contrast, an explicit modelling tool, where geometry is required to be created to display.

The difference is subtle, but fundamental and explains how nTop seems to make such light work of complex geometric from such as lattices, architected materials and much more.

As always, computation takes time, however efficient the underlying code, so while you can (and users have been) do the compute on the GPU in your workstation, it’s not quite as efficient as it could be – particularly when you consider that the resultant images on screen are implied, rather than fully calculated.

Hence, the use of the GPU massively accelerates things: Now, when you vary your parameters on features such as latticing, texturing, filleting, shelling and more, the feedback is near instant.

Have a gander yourselves:

It’s also worth noting that nTopology is pretty GPU agnostic, running on both AMD and Nvidia hardware.

It’s also worth noting that the system is a lot more accessible than it might have been previously and a trial can be had relatively easily.

There also some other pretty interesting updates in this release, from much improved guidance when you first start up the system, to greater automation and integration with other tools such as Esteco’s modeFrontier for design of experiments type work.

There’s also some interesting moves around the sharing of this complex design and engineering data that could be fascinating when considered in multi-CAD/Simulation environments.

We’ll be taking a look at what nTopology has been up to – since we last looked at the system – in our June issue, so stay tuned.