Dormant for decades, British carmaker Alvis has recently roared back to life. Stephen Holmes meets the team handbuilding classics from 20,000 original drawings and shelves of original parts, with the help of a stack of new digital technologies

Flipping through the specs for current models from British carmaker Alvis, a set of top-speed statistics jump from the page, accompanied by the note: ‘Performance figures recorded at Brooklands in 1938.’

Alvis has, in perhaps the most English way possible, ‘been on a teabreak’.

Founded in 1919, the company produced some of the most iconic cars of the pre-, inter- and post-war years, before production finally ceased in 1967.

Assets such as design plans and part stocks were transferred to Red Triangle, set up to provide parts and maintenance for existing Alvis cars. In 1994, the company was revived by Alan Stote. And in 2012, it set out on its journey to produce continuation cars using these still-intact design archives, with a few modern touches to meet today’s road-safety requirements.

The models now available capture key moments in automotive history. They range from the stunning Lancefield designed in 1938 which, as a limited run of 25 cars, is built fully from scratch, up to continuation models that include the 1960s-designed Alvis Graber Super Coupe.

The cars are produced in much the same way as the originals were at the Alvis plant in Kenilworth, near Coventry. And when people see the cars, the question that Alan Stote is most frequently asked is, “Is it a replica?” No, he tells them, firmly: “It’s not a replica, because it’s made by the Alvis car company.”

If a Bugatti Veyron comes off the Volkswagen production line today, he reasons, is that a replica of the one that came of the same line yesterday?

“Well of course it isn’t,” he says, his face breaking into a laugh. “It’s just a long time between orders for us!”

Key to continuation is the cost of the operation. Alvis is tiny by comparison to today’s gargantuan global automotive operations. To stay true to its origins, much of the production work is done by hand.

This includes the exquisite craftmanship of the body panels, which are hand-rolled and beaten from aluminium over a traditional wooden ash framework. These skills, however, are not conducive to modern mass production. By traditional means, it can take weeks to cut and assemble an ash frame and the necessary jigs, let alone hone the metalwork into shape on top of them.

To speed up production, Alvis immediately began to look at new technologies that might fit the bill, with Stote bringing in specialist automotive reverse engineering company A2P2, where the team had already completed some work for him on a personal project.

“We provided his first ever ash frame using CAD as the basis,” explains A2P2 managing director Alistair Pugh, speaking of this previous engagement.

“Pretty much before the war, all the body structure was an ash frame – strips of ash glued and screwed together, a skin put over the top of it, and that was always done by hand. It was down to the guy who’s got the skill and the eye to get the body shape right.”

Pugh laments that this is a dying art all over the world, but to enable Stote’s car to be repaired, the team 3D-scanned the vehicle, drew up the CAD model and the required ash frame components and had them 5-axis CNC-machined from planks of ash.

The resulting parts arrive as a numbered kit and slide together, “a bit like a piece of Ikea furniture,” says Pugh. “We do an awful lot of body jigs for people who either want to repair a car that’s been crashed, or want a digital archive of it, just in case they do crash it. And if they want to make a spare body or spare panels, we provide fairly low-cost tooling for them to do that.”

Pugh already had a long track record, working at various marques in the car industry before setting out with his own laser scanning business, but during the 2008 recession, when the mainstream automotive industry slowed to a halt, A2P2 began to focus on the classic motorsport sector.

“I just hate to say no to people; so all the all the horrible jobs that people have never done before, we’ve kind of said yes to them!” he grins, explaining how they’ve gone from producing parts as simple as laser-cut blanks, up to a recent project producing a whole engine for an Edwardian racing car from scratch.

“It’s really satisfying seeing your work go around a racetrack – and I’ve crashed my own cars and other people’s cars (accidentally!) and helped fix them using our methods,” he says, clearly delighted with his day job. With the Graber, Pugh sensed that Alvis was wanting to do more than just the occasional model. “Between Alan and me, we investigated whether we could make sort of in-between tooling, without having huge amounts of money spent on it,” he says.

“We only really needed local areas for his panel guy to get the accurate shape. So it would be a hybrid of ‘eggbox’ fixturing and solid tooling.”

For the solid tooling, Stote had noted that 3D printing was being used at a large panel company and began to research what 3D printers and materials might be suitable for their budget. He says: “As soon as you spend big money on a 3D printer, the running time and the price of the job, the price of the printer’s always amortised into the time.”

First the car had to be scanned, with A2P2 utilising its FARO ScanArm, a 7-axis 3D scanner. “It’s not the perfect bit of kit for bodywork. It’s not the perfect bit of kit for small things, but we can really utilise it in all our applications,” says Pugh, as he describes the varying jobs of one day covering body panels, and the next an intricate oil pump. From the body scan, an eggbox jig was made from 18mm plywood sections that were CNC-cut from sections of the 3D scan point cloud and then assembled to form the 3D shape over which the bodywork would be formed.

However, the handmade nature of the original 1964 car posed a quandary. It’s completely asymmetric – and the jig built from the scan data matched this completely. “You’ll probably find that the left-hand door’s half an inch further forward than the right-hand door, which is typical with a hand-built car,” shrugs Pugh.

“If we were surfacing something from scratch, we’d obviously ask if they wanted it to be symmetrical,” says Pugh. “And funnily enough, a lot of old car people want to keep the asymmetry because they think – and I quite agree with them – that it makes the car prettier because it’s a bit, not lopsided, but more organic.”

For the 3D printing process, the scan data would need to be surfaced in CAD, and maintain the asymmetric nature. The surface was produced in Autodesk Alias by a contact of Pugh who had previously worked in the styling offices of British brands like Bentley and TVR. The CAD data was thickened, and split into 12 pieces that would fit onto the printbed of the Raise3D Pro2 Plus 3D printer.

The CAD design positioned the 12 parts over a grid, with connecting bolt holes and locator dowel holes built in, ready to fit into a machined wooden base.

Early experiments with materials – 3D printing a small dome and then whacking it repeatedly with a hammer – had shown that the polycarbonate material stood up best, but A2P2 found it couldn’t process it as easily as ABS. Add to that the costs involved and the slower print speeds, and they decided on the only marginally less strong ABS, which once printed was infilled with a firm rubber.

The modular elements of the front panel also added benefits. If a section, such as the sharp angles around the headlight, was to break, then a replacement section could be printed and quickly slotted into the jig. That said, two cars have since been produced using the same tooling, with no faults as yet, and the process was repeated for other elements like the roof.

Stote interjects that the term ‘hammer-form’ is a bit of a misnomer in this case. “You need a technician who is rather sympathetic. What we’re trying to do with that hammer form is to speed up the process of the complex parts of the car. If you get somebody who just wants the beat 16-gauge aluminium over the top of it, I doubt whether it would have lasted like it has, but it’s a sort of semi offering up… I don’t think it’s literally that he ‘hammers’ on it. But it’s certainly worked very well.”

Alvis’s owner is still amazed by the way digital technologies have worked their way down to companies the size of his. “I mean, I would imagine 15, 10 years ago even, it would have been out of the reach of a small company to think of 3D printing or anything like it,” he reflects.

“When I take people around [the factory], the thing that fascinates them is that you’ve got a very skilled fabricator doing something using a technique that’s probably 100 years old. And he’s working on a piece of 3D-printed material. You’ve got that juxtaposition of the 100 year old skill, working on something that is absolutely at the cutting edge of development. And they find that quite fascinating! It’s no exaggeration to say we couldn’t really have made these cars without this sort of technology.”

Alvis still has the original engines for the continuation models like the Graber in stock. Built in the 1960s as replacement parts that were never used, these are brought down off the shelf and machined with modern digital milling techniques. The increased accuracy allows for much smoother surface finishes than would have been possible originally, and results in considerably more power out of the same engine. 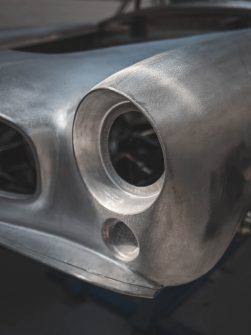 For the bodywork and coachbuilding element, Stote maintains this will always be a hands-on job, performed to order. With that in mind, Alvis is helping to train a new generation of apprentices in the skill. This is in part because of the freedom it gives the company, compared to the complex production line set-ups and minimum order quantities typically associated with modern car manufacturing.

“We give people the choice in that we don’t carry a body in stock; you just tell us which way you want us to bend the metal!” says Stote, with great enthusiasm.

“It’s really the opposite of the modern company. I mean, when we went around Aston Martin, and they showed us the eight models they do… The thing that’s obvious is that each of the body shells is almost identical. They might put a vent in the side of one, and it tells you where the cost is for them,” he says.

“That body shell and making the tooling for it is an enormous cost, so they’ve got to make as much as they can. We’re the opposite.”

Stote admits that most modern supercar designs resemble “a wedge of cheese” to him, informed as they are by drag coefficients and cooling channels. Instead, he much prefers the individual nature of classic cars, where the educated observer can clearly see that from the craftsmanship that “human beings got involved.”

In a world where technology has seen cars masproduced, their forms barely distinguishable from the competition, we’re beginning to see the same technology open doors to a lost world. And that world is populated by vehicles with great character and soul – and thankfully, electric starter motors.