The Lenovo ThinkPad P1 is sleek ultra-portable 15.6-inch laptop. An impressive machine for CAD on the go, yet it struggles a little to stand out from its predecessors

The ThinkPad P1 was Lenovo’s response to the ultra-portable 15.6-inch mobile workstations that had been flying out the doors at Dell and HP.

This year’s Gen 3 model is more evolution than revolution, featuring the same chassis as the ThinkPad Gen 1/Gen 2, but there’s still plenty for CAD users in search of a good balance of performance and portability from their mobile workstation. 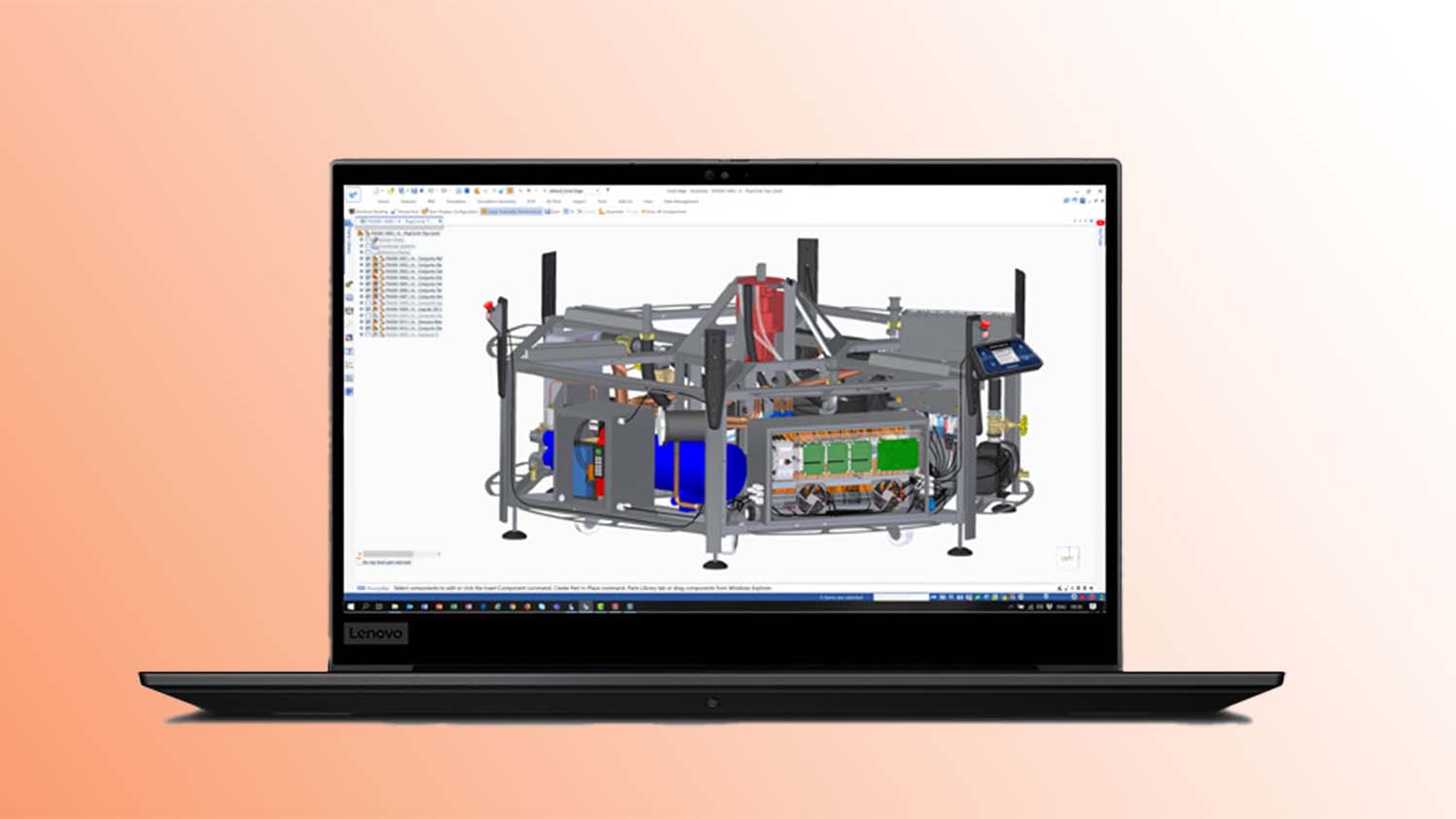 The Lenovo ThinkPad P1 Gen 3 is a stylish machine. It’s thin  (18.4mm) and light  (starting at 1.7kg) and comes with a new matt black ‘anti smudge’ soft-touch finish that significantly reduces marks from greasy fingerprints, a bugbear of the Gen 1/Gen 2 models.

There’s an understated carbon fibre weave on the rear of the panel to show off the premium materials.

Like its predecessors, the Lenovo ThinkPad P1 Gen 3 has been designed to withstand (and is Mil-Spec tested for) cold, heat, vibration, shock, dust and other hazards.

Built with a magnesium chassis, the laptop has a really solid feel to it: the hinge is firm, the display is rigid, and the keyboard has very little give. All of this is trademark ThinkPad.

The keyboard is seamless, so it blends  in with the palm rest, but there’s no numeric keypad.

There’s just about the right amount of travel on the keys, making typing a pleasure, a reminder of just how unimpressed I am with my 2019 MacBook Pro’s ‘butterfly’ keyboard.

Equally, the glass touchpad has the perfect amount of resistance with full multitouch support.

For those who prefer their input device to be old school, there’s the classic trackpoint, along with three physical mouse buttons.

To the right of the keyboard, there’s a fingerprint reader that uses touch rather than swipe for easier authentication, and Windows Hello technology is built into the optional Hybrid IR camera, complete with privacy shutter.

The Dolby Atmos speaker system is said to be an improvement over the Gen 2. The clarity is superb and volume loud, which is great for video calls, but it lacks bass.

Our test machine’s new colour-calibrated 4K LCD IPS 600nit panel is a thing of beauty, delivering incredible brightness, super-sharp detail, and an impressive range of colour and contrast, with support for Dolby Vision HDR and 100% Adobe.

The bundled Pantone X-Rite Color Assistant software allows you to choose between colour profiles, including sRGB, Adobe RGB and DCI-P3. Blacks appear really black and, with an anti-glare finish, there’s virtually no reflection. It really is a joy to behold.

It replaces 802.11ac (Wi-Fi 5) and not only boasts faster speeds (up to 9.6 Gbps compared to 3.5 Gbps) but is also said to work much better on congested networks with lots of connected devices. Of course, you’ll need a Wi-Fi 6 router to take advantage.

Wi-Fi 6 was also available on the  Gen 2, but the new model increases the connectivity choice with an optional LTE WWAN card for mobile broadband – simply insert a Nano-SIM card on the side of the machine, just as you would for a mobile phone.

You can of course tether the Lenovo ThinkPad P1 to your smartphone via Bluetooth or WiFi, but the built-in card is a much more elegant solution for those frequently on the road.

There are two slots for RAM and two for M.2 SSDs, as well as access to the WiFi/WWAN and the 4 cell Li-Polymer 80Wh battery, though this is quite fiddly to replace.

Rapid Charge Technology means you can go from zero to 80% charge in 30 mins and from zero to 40% in 15 mins after plugging in.

Finally, the ports: there’s a decent selection, including two USB-A 3.2 Gen 1 (one of which is always on), two USB-C Thunderbolt 3 and HDMi 2.0. The machine is too slender for a full-sized Ethernet port, so Lenovo bundles a USB-C to Ethernet adapter instead.

For a machine of this size, you get a decent amount of processing power, although  it’s not a marked improvement over the ThinkPad P1 Gen 2 — the main difference being ‘Comet Lake’ 10th Gen Intel Core CPUs instead of ‘Coffee Lake’ 9th Gen.

On paper, the Core i9-10885H might have a 5.3GHz Turbo, but this is a theoretical maximum and in our single-threaded Solidworks benchmark, we mostly saw it hovering around 4.6GHz/4.7GHz, with very occasional bursts of 5.0GHz.

But performance is good. It took 79 secs to export our IGES test model, three seconds quicker than a ‘Coffee Lake’ Intel Xeon E2286M in a Dell Precision 7540 and only four seconds slower than the Intel Core i9-10900K, which is the current fastest desktop CPU for single-threaded workflows.

In our multithreaded render tests, the ThinkPad P1 Gen 3 did well, on par with the Dell Precision 7540, which has a  much larger chassis so more substantial cooling.

But don’t expect to get similar performance to an equivalent desktop CPU, which can clock much higher when all eight cores are in use.

That said, the ThinkPad P1 Gen 3 does run steady and maintained an all-core frequency of around 3.30GHz, even when rendering for well over an hour.

Impressively, fan noise was quite acceptable and the chassis — the palm rest in particular — remained cool to the touch.

Importantly, the P1 also performs well when running off battery, completing our render test in 442 secs, only a touch slower than the 397 secs it took when plugged into the mains.

In the point cloud processing software Leica Cyclone Register 360, the P1 did well, but as this multithreaded application is heavily dependent on available RAM, it would have done a lot better if the machine was configured with its maximum 64GB.

The Quadro T2000 GPU is a Max-Q Design variant, which means it’s clocked slower than a standard T2000 in a larger mobile workstation like the ThinkPad P15 or HP ZBook 15.

However, it’s still perfectly adequate for 3D design work, particularly as most CAD and BIM applications are CPU limited so they can’t even take advantage of a more powerful GPU.

3D performance will likely fall short  in real-time viz applications, not just in terms of processing power but also in terms of GPU memory (4GB), though this can be offset to some extent by dialling down the display resolution or increasing scaling.

In real-time arch viz tool Enscape, for example, we got an unworkable two frames per second at 4K resolution, but this jumped up to 24 FPS when the display was scaled to 250%. But this means you won’t get the most out of the beautiful 4K display. Or, you could buy a FHD panel instead.

When Lenovo first announced the ThinkPad P1 Gen 3, it made a lot of noise about a new Ultra Performance Mode that would allow users to dial up system performance as and when required, by effectively pumping more power into the CPU and GPU.

Unfortunately, Lenovo ran into problems during testing and validation, which meant the system didn’t perform as hoped.

As a result, for this Gen 3 release, UPM isn’t the market differentiator that Lenovo was aiming for. The company puts this down to the fans, which wouldn’t spin fast enough to take advantage of the new cooling solution.

Lenovo told DEVELOP3D that UPM  still offers some benefits in this current iteration, mostly during longer duration workflows, which may explain its relatively high clock speeds when rendering.

It added that it has already sourced a higher-powered fan for the next generation and the UPM design philosophy will continue going forward.

The ThinkPad P1 Gen 3 is an impressive pro laptop for CAD on the go — powerful, thin, light and extremely well-built.

It’s a great upgrade from a bulkier mainstream 15-inch mobile workstation, but if you already own a ThinkPad P1, then it’s a harder sell.

An improved display and WWAN support will be important to some, but in terms of raw performance, it won’t be a huge step up.