With a role that falls somewhere between a detective, uncovering clues as to where big opportunities for innovation might be found, and a horse whisperer, convincing stakeholders that it’s worth risking their careers to take a leap into the unknown, Jude Pullen has worked with many big-name companies, including RS Components and LEGO. Here, the creative technologist gives an insight into that work, helping clients to imagine what the future might look like and understand better the role of beta testing in modern product development

Q: So, Jude, how does your ‘detective work’ with a client typically begin?

A: In my work, my ‘special move’ with many companies is that I uncover the rogue geniuses or potential products already within their midst, with the challenge for me being to polish the rough diamond, such that everybody sees its potential and can take it further.

A curious thing about big companies is that, despite having truly world-leading talent, often things under their noses are not understood, or even noticed, by the majority in the company. I love the thrill of discovering something ‘hidden’ with what is often a reframing of the people and opportunity. The company does not then have to search for a ‘magic bullet’, and the relief that ‘it was in us all along’ is palpable. That is ‘Part One’ of the journey, so to speak.

Q: Can you tell us what beta testing looks like? Why should companies beta test?

A: Once the internals of the company are refreshed, realigned and focused, Part Two begins. This is where beta testing can add value to companies looking to innovate more in a ‘dialogue’ with their consumers. I have worked on covert R&D projects, often lasting two or three years, and some costing millions. In truth, part of me loves deeply focused and somewhat obsessive work like this.

Conversely, when you have ‘a vision’ or ‘a mission’, as many start-up founders do, but not necessarily the certainty that the ‘innovation’ is right, or that people will ‘get it’, this is when beta testing can outpace secretive R&D. We see this in the digital world, where A/B tests are rapidly iterated, to hone in on what is a good product/market fit. Moreover, if the market is fashionable and/or fast moving, a three-year R&D cycle can be risky. If a year before launch, the market shifts from where you thought it was going, you have potentially wasted two years.

Q: Does this mean companies should jettison their secretive R&D labs?

A: To be clear, I am not saying R&D is dead, and agile is king. Many companies, in fact, have a hybrid approach, but the trick is to know when you are developing a core capability, technology or platform, and when you are creating interactions with the customer on top of this.

At Dyson, I saw this with the motor, battery and airflow technology as the core capabilities that not only produced powerful vacuum cleaners, but subsequently yielded advances in fans, hairdryers, and to an extent electric cars, as these core technologies were transferred to places beyond cleaning floors.

If you’ve purchased a car, you are likely purchasing a chassis of which only a few variations exist, but with a fancy outer shell and interior. This production line efficiency is now being applied through sustainable design and is called ‘pace layering’.

LEGO makes a lot of sets with a core selection of bricks and as few special, theme-specific pieces as possible. This is not just about profit, but it is good for the planet too, as the core elements can be used in more sets and are more flexible for the end user.

German company Festo is another hybrid innovator that challenges its engineers to create wildly ambitious solutions, such as recreating the flight of a bird, using lightweight materials and pneumatics, or to replicate the ‘energy recovery’ of a kangaroo’s leg muscles mechanically.

This is not simply about team building, but fundamental research and creative application of biomimicry. When the teams perfect their kangaroo leg, the designs are abstracted such that they can be applied to industrial applications like automotive suspension systems. These ground-breaking advances are not trivial and are commercialised with the business acumen you’d expected from a German powerhouse of innovation.

The quirky kangaroo project serves its purpose in the media, but their clients appreciate that something core will be progressed in further R&D and explored in myriad industries that require storage of mechanical energy. What potentially starts in automotive might evolve to aerospace or medicine. With the intellectual property defined, the fun of beta testing can begin.

Nike, where footwear R&D will see years of investment, develops iterations through engaging star athletes to test, review and demand the future. What is encouraging about Nike’s story, according to co-founder Phil Knight’s book, Shoe Dog, is that even though their blunders sometimes risked injury to athletes, the spirit of constantly moving forwards is one that transcends the trial and error of their process – all in the pursuit of besting the best-in-class.

The commitment to involve the end users in beta testing and ideation is part of what gives Nike the edge. Insight from the real world helps avoid R&D that is outdated at launch, but also a mix of dogged persistence to uncover new ground is vital for creating a paradigm shift in the market. Nike fostered a collaborative connection with athletes, so the highs and lows were shared, making a powerful synergy between company and consumer.

Q: Given the amount of data that products ‘in the wild’ generate, how is this affecting beta testing?

A: Increasingly, companies are releasing ‘combinations’ of beta tests within a crowd-pleasing campaign message. Think of it like Russian dolls: on the outside, Apple AirPods are overtly a compelling offering of a compact audio experience. However, if you consider the inner layers, Apple will likely be able to pair your physiological response to what you are listening to. If it knows your posture, it can infer how engaged or alert you are, likely even if you smiled or not. Have you noticed your ears move when you smile? These are all potential data points to collect and innovate with.

If this sounds a little too creepy to sell as a product today, you’re likely not alone. It’s better to create a loved experience – in this case, spatial headphones – but beta test the biometric data of entertainment until the mass market is ready for it.

This is not to imply any nefarious wrongdoing by Apple, but it is also plausible that the primary offering of many products in the modern age may well have a broader long-term agenda beyond the user’s interaction – Alexa being another well-documented example.

Although it is impossible to say what is the perfect mix is between R&D and beta testing in the wild is for any given company, one thing is clear: doing only one and none of the other is likely to create a critical weakness in any company, that will be exploited by the competition, be it large or small.

By embracing a mix of the two and taking time to work out the right balance, a company will innovate smarter and faster, and its innovations will arguably be more enduring in the future. 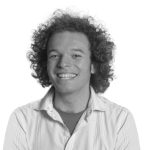 Winner of the 2020 IMechE Alastair Graham-Bryce Award, Jude Pullen is one of eight featured inventors in BBC Two’s ‘Big Life Fix’ documentary series, which helps people with disabilities through technology and design.