With electric bikes beginning to gain traction in Europe, the ex-Jaguar Land Rover engineer hit upon the idea of an electric bike that could be easily carried and stored.

But when he started to explore what was already available on the market, he found that most folding e-bikes were heavy and cumbersome. That discovery provided the push he needed to set about designing a lighter and more integrated solution.

The starting point for his work was the fold itself – and more specifically, designing a mechanism that would ensure the bike frame was very compact once folded.

His initial concept envisaged an offset headset and a folding fork hinge, which would allow for all of the electronics to be concealed within the bike’s top tube.

“We wanted a lot of space around the knees and the feet, but we also wanted a really stiff frame for a responsive and controlled feel to the ride,” says Henderson, speaking from Flit’s base in Cambridge, UK.

“That led us to have this quite long wheelbase, and this top tube with a big diameter, free of hinges, which gives a really stiff mainframe.”

The top tube is also the space where the power source, a lithium-ion cell from manufacturer LG, slides into place.

Initially, Flit had started to develop its own battery, but quickly realised that the certification process for its own battery management system (BMS) would be too expensive.

That made partnering with a battery manufacturer and using its pre-certified BMS a better option. 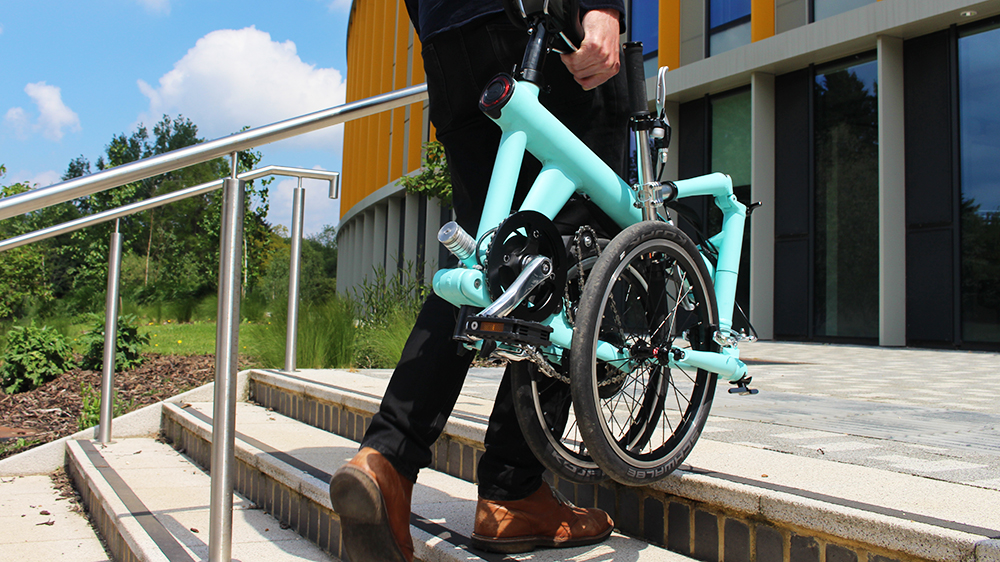 The design team needed to be able to easily collapse and unfurl the bike through its various fold states and update the overall bike geometry via a master sketch in CAD.

The aim here was a model that would enable the team to quickly update the whole assembly and its constituent parts, regardless of its folded state.

“We found Solidworks very well-suited for this task. The Mate Controller feature was especially useful for quickly switching between folded states,” says Henderson. Another benefit, he adds, was the ability to create quick renders using Photoview 360.

“Solidworks allowed us to use all their packages free for a year, as part of their entrepreneur licence. This was a huge help to us in the early stages,” he says.

Some simple beam-bending calculations were employed in making some of the first guesses at the geometry.

“We are keen to start using finite element analysis package like Ansys or Altair to further improve the speed of our product development cycle,” says Henderson, adding that the cost associated with such packages has been the main barrier for his small start- up.

The geometry was then refined on the basis of physical test results, using 3D-printed parts to test the various joins and folds, as well as user interaction.

Physical prototyping was hugely important to the development, with filament-based 3D printers used to print entire bikes before the design was committed to metal. This proved very cost-effective – an entire bike print of the Flit-16 cost around £80 in materials.

“Our bike models are modular, so parts can quickly be switched out to test new design features,” explains Henderson.

The physical test models also had other benefits, he says: “Many component suppliers for items like brakes and tires were not fond of sharing their CAD with new customers, or would not have accurate CAD, so having the physical bike model meant we could very quickly assess how different tires, brakes, levers and grips would affect the fold.

“We were also able to test things like electrical system integration, cable routing and the function of latches and clamps.”

After a series of modifications, the practicalities of Flit’s proprietary fold mechanism were complete. With the mainframe parameters set, Flit designer David Turpin sketched shapes based around the circular top tube and new folding mechanism.

Having finalised the initial design, the team at Flit then turned to a manufacturer in Taiwan to supply the first rideable prototype. Here, CNC-milled and 3D printed parts were combined to minimise tooling costs.

“We then set about fine-tuning the geometry and improving the design,” says Henderson. “We then headed back to Taiwan for another round of prototyping, this time with production-level jigs and fixtures. The result is the bike you see in our Kickstarter video.”

What sets the Flit-16 apart is that its qualities as a folding commuter bike don’t compromise the way it handles.

“The great ride comes from a combination of a long wheelbase, stiff frame, just the right amount of trail [length of the rear wheel bracket], and a custom suspension system,”

Henderson explains. “Each of our prototypes had slightly different amounts of trail and we think we’ve found the sweet spot for our bike.”