Autodesk Fusion has updated its plans for Fusion 360 Extensions as part of Autodesk University, being held, as was inevitable, virtually, this week.

If you’ve got an interest in watching the maturation of Fusion 360, you’ll know there have been some fundamental changes in recent years to how the product is packaged up and sold.

While the company took the decision to move away from a tiered pricing structure (removing the Fusion Ultimate package) and rolling all of that functionality into the core Fusion 360 offering, it has also started to add back in layers of additional functionality (and additional subscription costs) using an Extensions approach.

These are subscription-based sets of functionalities that serve specific areas of capability. At present, these Fusion 360 extensions are categorized by workflow, such as Additive Manufacturing (specifically focusing on metal additive), Complex and Advanced machining and Generative Design. The costs vary by extension and by term of your subscription – ranging from day access to an annual subscription.

At Autodesk University, the company has announced plans to greatly, if you’ll pardon the pun, extend these further – let’s deal with work being done on current extensions.

The machining extension is where Autodesk is taking much of the knowledge, know-how and experience from its acquisition of Delcam and its products such as PartMaker, FeatureCAM and especially PowerMill and making core components available to the Fusion 360 user.

Of course, this is over and above the already rich set of tools for machining and turning in the base level product. Coming soon, the Machining Extension will also include full machine tool simulation  – this will also dovetail nicely with Autodesk’s recent acquisition of CAMplete and its CAM verification system.

This is Autodesk’s flagship technology and the one bit of technology in its arsenal that it makes the most noise about (often to the detriment of other areas of Fusion 360’s capability).

While it was initially focused on generating designs using a mix of topology optimisation based on structural simulation techniques combined with automated design of experiments tools and focused on additively manufactured parts, it has since grown to cover machining, die casting and more.

For AU, the team is also announcing that fluid flow will physics modelling will also be part of the generative offering, specifically targeting minimization of pressure drop while avoiding obstacles.

When they first launched, the additive tools were bundled into the Manufacturing extension, but some have now been split out, while tools for less complex process, such as FDM, remain part of the base level package. The goal here is that you’ve got a set of tools that allow you to set-up and preprocess your parts for additive manufacturing, focussing on powder bed fusion of metals. 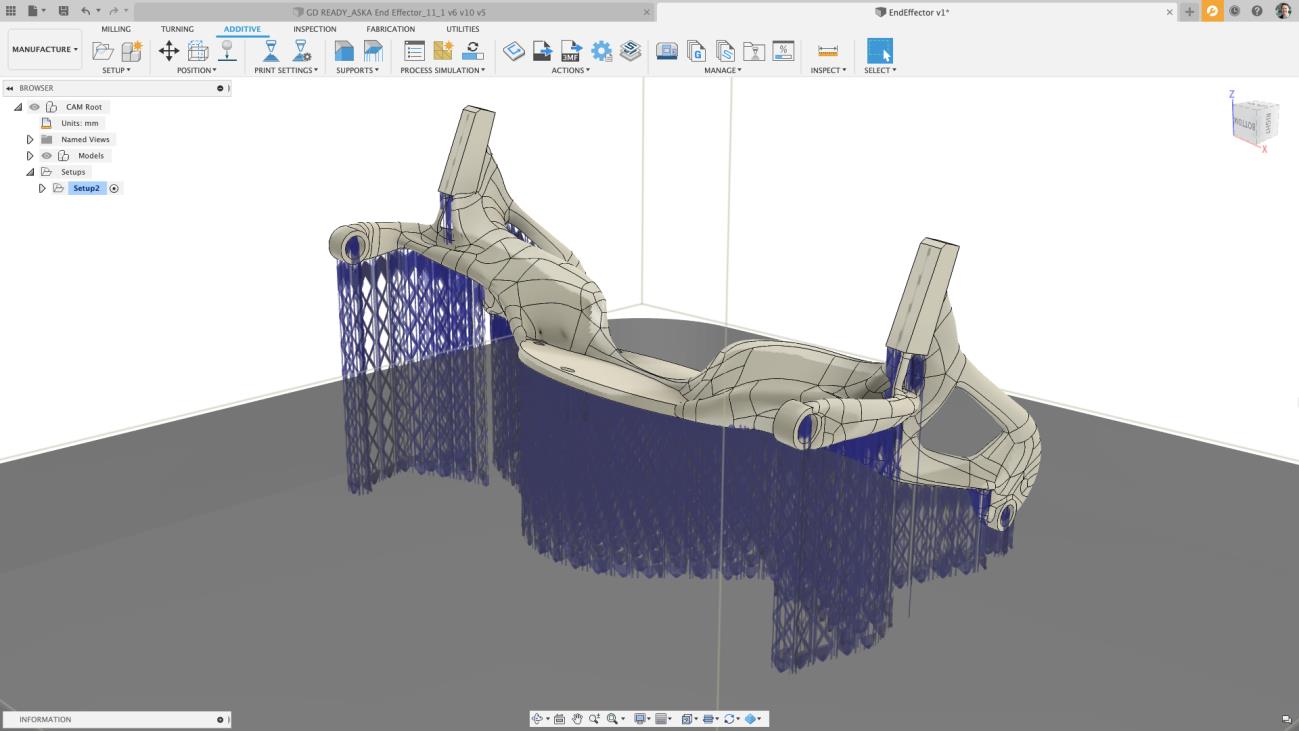 Autodesk, of course, has a bunch of technology in this area from its acquisitions in NetFabb and its investments into organisations like Fit in Germany. While this set of tools will continue to be developed, the next year should see a partner extension come online that handles metal build simulation.

The new Additive Simulation Extension is looking to use Netfabb’s simulation technology to help simulation the power bed fusion process, finding areas where errors occur during build. What sort of errors? A common issue are heat build-up during the process which causes deformation of the partially built component interfering with the recoater arm that’s a key part of many metal additive processes. This is targeting for a January 2021 release.

Alongside the on-going work done on the new extensions in the coming year, 2021 looks like it’ll be a bumper crop for new capabilities coming to Fusion 360 – and it looks like someone has been threw the cupboards at Autodesk HQ to dig out a bunch of technology from Autodesk’s huge range of acquisitions in the manufacturing space in the last decade or so.

Quite some time ago, Autodesk acquired an outfit called Magestic Systems that focussed on the processing of sheet materials, whether that was sheet metal or composites.

We’ve seen some of the technology from Magestics’ TruNest make it into Inventor, but as yet, not much in the Fusion 360 environment. This new extension looks to help with some of the challenges in fabrication, particularly around nesting of sheet metal flat forms. This is aiming for early 2021 as a release date.

Injection moulding simulation is something that Autodesk keep very quiet about, considering they acquired Moldflow donkey’s years ago – it’s also one of those technologies that has never really gained the widespread adoption that you might have imagined it might (for a few reasons). That said, there’s potential there for it to be used by those that require it.

While it’s not clear how much of Moldflow’s huge capability will make it into this Extension, it should let you doing a pack, filling and warp analysis – no mention yet of how many gates (some of the lower end injection moulding analysis tools struggle when you’re working with multiple gates). Again, this is targeted for early 2021.

Last but not least, Autodesk are looking to introduce more extensive data and lifecycle management tools into Fusion. While there has been moves around this with Fusion Teams, this looks more akin to traditional data management processes, such as part numbering, ECOs/ECN and other workflows.

Autodesk’s relationship with PLM has been a little up and down, having made a lot of noise about it a while ago, but things seem to have gone quiet more recently. They’re claiming that this will be ‘up and running in three seconds’.

This, I cannot wait to see, because I’ve been working in this industry for 25 years now and I’ve seen everyone and their dog promise instant-on, instant-out of the box PLM. And every single one of them has failed, because product lifecycle management, if not done properly, is hard work and rightly so.

It’ll be interesting to see what else comes out of Autodesk University – the company is pretty much focussed on the construction market, by all accounts, but that’s not to say that there aren’t interesting things going on in design and manufacturing.

In fact, its this group that’s doing the most interesting work to push ahead (it’s also worth keeping an eye on what the team behind Alias and VRED are up to as well).

These updates to the add-ons for Fusion are fascinating – the cynic in me wonders who went around all of the proverbial cupboards, found the products that had been acquired and decided to build a new set of extensions with what they found.

There have also been some interesting changes in how the Fusion development path has shifted in recent months, but we’ll talk about that in the next edition of DEVELOP3D in more depth.