Lincoln Electric is a brand synonymous with welding. Stephen Holmes speaks to the team there about how it has expanded its automated DED additive manufacturing capabilities, and the role played by Creaform’s contactless QA in building some of the largest parts ever seen

When engineers at Lincoln Electric say the company makes ‘large-format’ additive metal parts, it’s hard to grasp just how enormous these builds are, until its expert team starts chatting about recent projects.

“That part was 5,500lbs, 8 feet in the long axis – a single piece,” says Mark Douglass, business development manager for additive solutions at Lincoln Electric, discussing a recent build for a chemicals plant. It was six weeks of continuous, 24/7 3D printing in one of the company’s 18 huge systems enclosures, confirms his colleague Amanda Dodge, an additive solutions engineer.

Once a week, the team would enter the build enclosure, in order to 3D scan the giant part. This would give them the ability to compare it with the CAD model as it was building, making sure that nothing was going awry and that enough material was building up where needed. “For that part, we were scanning it throughout the print, because with the MetraScan, you can scan it without needing to put dots on it or touch it, and the part can be hot,” says Dodge.

Traditional measurement systems prevented the team from measuring parts on the production floor. “Minimising the movement of parts is important to us. We knew that a CMM or arm was not going to cut it. So, we looked at alternatives and 3D scanning fit the bill,” says Douglass. 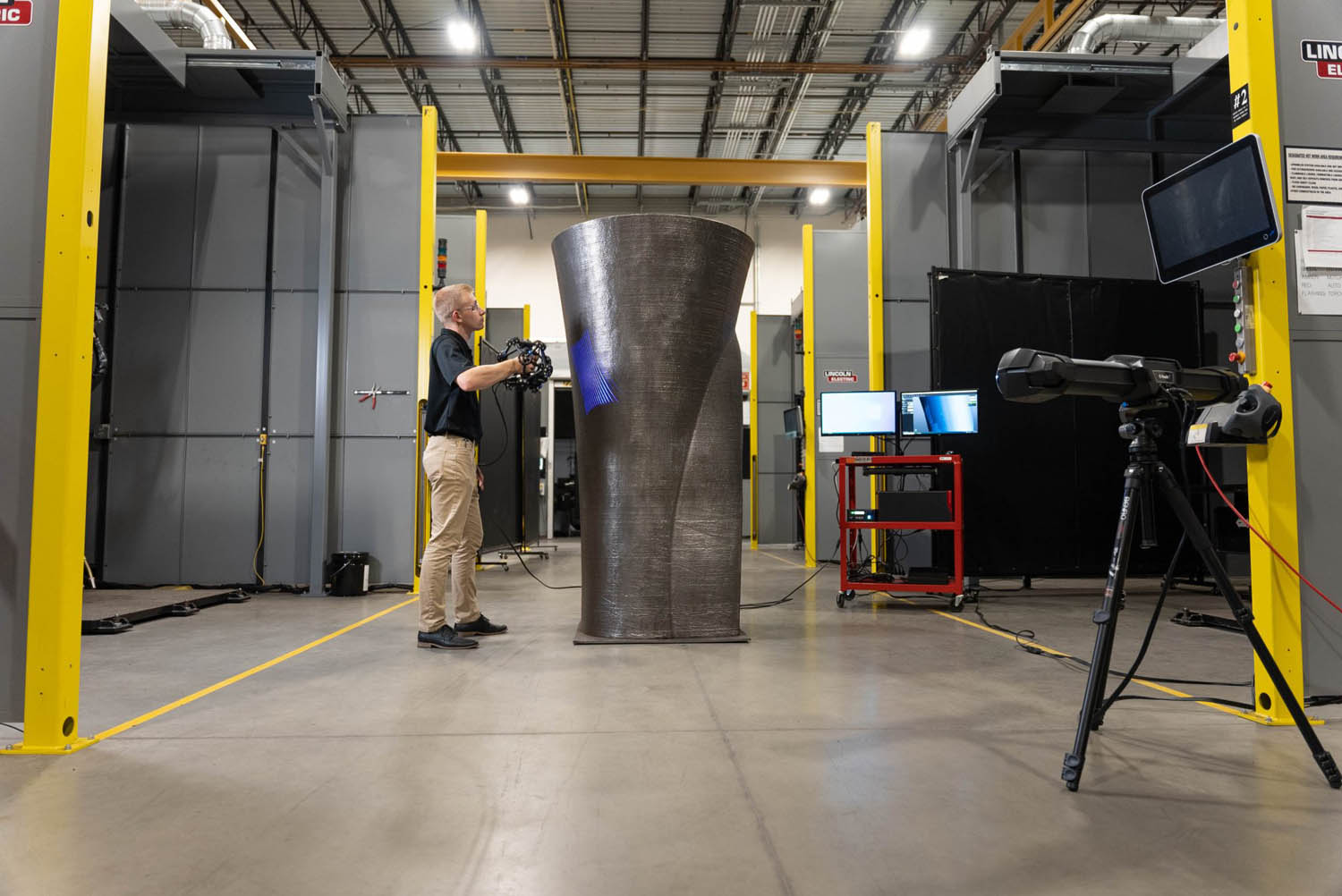 Lincoln Electric has a wealth of experience in metals welding, and by some definitions, has been ‘3D printing’ parts for decades. Only in these cases, it wasn’t a machine but a person that was responsible for building up layers of metal to quickly fabricate or repair an industrial part.

In 2019, the company launched its additive solutions business unit down the road from its main headquarters in Cleveland, Ohio. Having pioneered its own large-scale robotic metal 3D printing technology, Lincoln Electric Additive Solutions now creates prototype, production and replacement parts from steels, stainless steel, Invar and nickel alloys, using wire-fed DED 3D printing. Its customers are all from the heavy industry sector and already significant users of welding. These include clients involved in oil and gas, farm and construction equipment, power generation and ship building – all “big stuff”, as Douglass puts it.

“A lot of people we’re going after, they think 3D printing’s what they have on a desktop, right?” he explains. “You can print little trinkets, you can do dental work, which is all great stuff – but they never thought that they could print a 5,000lb part. It doesn’t even compute!”

The process used means Lincoln Electric can produce or repair critical parts with complex geometries in superfast turnaround times. No lengthy waits for a casting to be made or for replacement parts to be shipped.

For parts of this size, simulating build processes and final part dimensions with finite element analysis (FEA), as you would for smaller scale 3D printing, would take too long, says Douglass.

“The compute horsepower needed to do parts this large isn’t there, we found. So we just go with good engineering principles,” he says, pointing across the table to his colleague. “Smart people like Amanda figure out how to do it and make sure it’s done well.”

Checking everything is where 3D scanning comes into play. To meet this need, Lincoln Electric opted for Creaform’s MetraScan 3D, a fast and highly accurate portable 3D scanner that is built for shop floor environments and capable of scanning objects without need for clean-up or targets and regardless of temperature.

That’s a huge time saving when you need to capture parts mid-way through a build process. Some of the parts are so large that they need to be scanned in situ. “It’s difficult to get the scan all in one piece, because we can’t get around to the other side,” says Dodge.

To solve the problem, she explains that they merge the two scans into one model, using a mix of Creaform VXelements software and most often Lincoln Electric’s own software, SculptPrint OS.

“It started off as a complex curve machining software for 5-axis machining,” explains Douglass of SculptPrint, “and we approached [the developer] with the concept of flipping it inside out. Instead of the software modelling removing material, it would be adding material. He was intrigued, and eventually we absorbed the software into our company.”

The final part has to be machined from the near net shape 3D-printed part. Ensuring the desired part still fits within the printed geometry and finding the best fit is key to a successful outcome, especially given the cost and timescale of producing such parts. The optimal placement of the ‘part within the part’ can be difficult to gauge, so 3D scanning helps ensure everything is well within the necessary parameters and boundaries.

“A lot of times, we have parts with unique features,” says Dodge. “3D scans enable us to assess all the complex features we are printing—and verify that all those features are correct.” Douglass concludes: “We’re trying to find customers who don’t know that we can solve their problem. It’s not on their radar that it’s even possible. So getting their attention is pretty hard.”

But as the technology gains wider recognition, more companies are beating a path to Lincoln Electric’s door. Once there, the only question is: How big can they go?